Afternoon friends and hangers-on! Recently I’ve been meandering a bit in my reading tastes and have delved into some graphic novels as I am wont to do on occasion…On this occasion I took the decision to delve after meandering past a display shelf at the library containing a graphic novel of intricate and/or inviting cover design.  The two I have for you today range in target audience, content and just plain oddness, so in case you’re planning to use this post as a Christmas gift guide (and why wouldn’t you?), you’d probably better pay attention so you don’t end up giving the fun, kiddy one to your broody Emo-teen nephew Reginald, and the super-creepy and sociopathic one to sweet little seven year old niece Emmy-Lou. You’ve been warned.

The Fun, Kiddy One

Cat’s Cradle: The Golden Twine by Jo Rioux tells the story of Suri, an orphan hanger-on to a travelling caravan who has dreams of being a monster-tamer.  After accidentally taming a terrifying monster held captive at the fair, she finds herself relentlessly pursued by some shape-shifting humanoid monsters for reasons unkown to her.  Luckily though, accidental monster-taming has its benefits and Suri ends the tale with at least one more friend that when she began.

The cover of this book drew me in immediately and I picked it up with absolutely no idea what the story was going to be about.  I often do that with graphic novels – I find I don’t need to know much about the story in order to be prepared to give it a go.  I’m glad I did (give it a go, that is), because the art and the story had me hooked.  Unfortunately, I finished the book in about 15 minutes and was desperate for more!  Luckily, I have just checked on the author’s website and book two is in the works. Hurrah!

Cat’s Cradle would be a perfect choice for reluctant readers of middle grade age, because the art and story are highly involving, easy to follow and draw the reader in.  With a female main character, this could also be a good choice for girls who are looking to expand their reading horizons and try something different from the standard fairy/fantasy chapter book.  Boys will surely enjoy this one too however, due to the themes of monster-hunting and magic powers.

See, this is why I love libraries – you never know what little gems are lurking in the stacks.  Book two in this series is called The Mole King’s Lair….I’ll be keeping my eyeballs out for it. 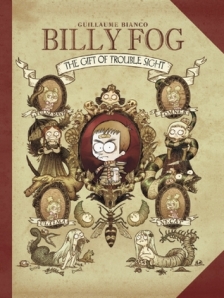 I happened across Billy Fog and the Gift of Trouble Sight by Guillaume Bianco, as with Jo Rioux’s book, after spotting it on a library display stand.  Apparently, so the blurb (which I never bothered to read) goes, Billy Fog wears glasses, but when he takes them off, he can see all sorts of weird, creepy things that other kids can’t.  It’s probably good that I never read this blurb as that has little if anything to do with the story, such as it is, and I can’t even remember any pictures of him with glasses on in the actual book (although I’m sure they’re there).

No matter!  What really drew me to this one was the fantastic aged look of the cover and creepy, Burton-esque art style.  Check out some of the artwork – isn’t it just fantastically atmospheric and fun and oddly enticing? 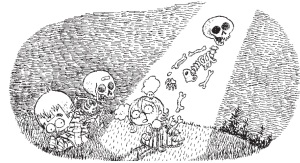 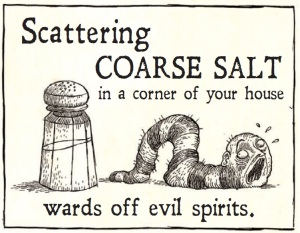 Well, I thought it was.

Now. While this book has fantastic art, the content is just flippin’ weird.  So in the first few pages Billy’s cat Tarzan dies. He may have had something to do with it – that’s never made clear.  But basically, the book deals with Billy trying to make sense of that unwelcome, ever-present visitor hanging around in the shadows, death.  He even asks Santa Claus for some advice on the topic.  Other bits of the book feature Billy’s attempt at a bestiary of creatures that haunt dark spaces, and stories about other odd-bods that he has encountered in his young life.

I have to say it – this was a odd, creepy, unsettling book.  Strangely though, many books of this ilk have a weird sort of a pull, making it impossible to look away.  Billy Fog was no exception.  The weirdest part of the book was the really deep theme of existential angst running through the stories.  Essentially, while the main character of this book is a young child, the content is really for late teens and older.  The back of the book says 13+, but I think even that’s a bit optimistic.  You would not want to give this to a little kid, or indeed, a particularly sensitive kid – it would scar them for life and probably bring their nightmares to life – unless you want to instill in them a deep-seated fear of sleeping alone, that is.  You however, as a mature, open-minded and slightly anti-hipster-ish adult, will probably be intrigued by such a tome.

I have actually found a cover design for volume three of the Billy Fog saga, Billy Fog: The Boy Who No Longer Believed in Santa Claus that will give you a far better feel for the content (and is no less appealing, art-wise): 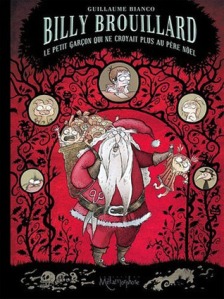 See? Now you know what you’re getting yourself in for.

So there you have it – my little foray into differenetly-formatted fiction.  Sharp-eyed readers will also note that Cat’s Cradle would be the perfect choice in the Small Fry Safari Kid Lit Readers Challenge 2014 for category two (a book with a piece of furniture in the title), while Billy Fog would suitably acquit both category four (a book with someone’s name in the title) or category six (a book with something precious in the title).  Don’t know what I’m talking about? Then click on the large and absurdly attractive button below to check out the challenge and join the Safari! 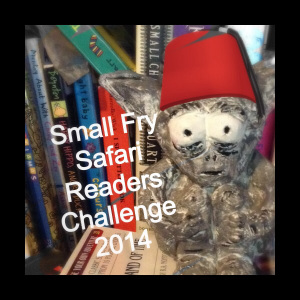