Today I am very pleased to be bringing you the awesome beginning to what looks like a fantastic series in the Young Adult bracket – Glimpse (Book 1 of the Dean Curse Chronicles) by Steven Whibley.  I received a copy for review from the publisher via Netgalley, although the book was released in April last year.  Why then, I wonder, did I not come across it before? For it has all the elements that I love to see in a paranormal YA book, including, but not limited to, timey-wimey conundrums, the restless dead, mysterious secret societies and group therapy meetings.  Allow me to explain.

In Glimpse, we are introduced to average almost-fourteen year old Dean, as he stumbles upon some muggers beating up a man in an alleyway on his way to school.  After chasing the muggers off, Dean tries to help the man, but all he gets is a whispered word (bet you can guess what it is…I’ll give  you a hint, it’s in the title) before the man falls unconcious and is taken to hospital.  Dean is hailed as a hero but soon finds out that something that happened in the alley has caused him to have terrifying visions of people screaming in fright. On discovering that his visions seem to predict people’s deaths, Dean and his friends Lisa and Colin try to find out the cause of Dean’s new “gift” (or possible curse), before Dean’s psychologist father has him in some serious therapy. 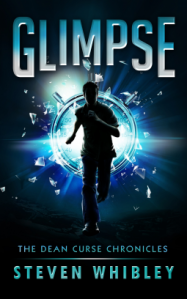 * you’re the kind of person who loves to say, “See, SEE, I told you that would happen!” when any situation occurs that has even the most tenuous link to something you once mentioned in passing in coversation

* you believe that to defeat a worthy foe (a painful little sister, for instance), you need only discover their weakest point or deepest humiliation…and then use it against them at opportune moments

* you love a good shrieking apparition – the kind that sets your eardrums ringing and gets every hair on the back of your neck (or the back of everywhere, really) standing on end

* you’ve ever made a complete fool of yourself in front of an entire classroom, endured the brunt of teasing and awkward looks, ridden out the storm of humiliation and assured yourself that things have blown over….only to find out later that things can always be worse

I really, really enjoyed this book.  For starters, Dean, Colin and Lisa are very likeable characters, the relationship between them is believable and there was never a time when I thought that their motivations and actions were not authentic to their age-group and abilities.  The dialogue between them works and there’s no sense that this author is trying to write like kids talk. The strength of these three characters really carried the story through for me and made it a lot of fun to read.

Whibley has managed to write scenes that had me feeling a bit tense and creepy, while also keeping the overall tone of the book light.  While reading the scenes in which Dean sees his visions, I got some chills up my spine – there’s something very freaky about imagining an apparition of someone you know looking all undead and zombie-like, then getting in your face while screaming in terror.  I really felt Dean’s fear in those parts, which made the whole book more believable.  Also, the story is very well crafted.  There were no lulls in the plot, there was always something going on and there was a great mix of action, mystery and problem-solving that pushed the story along at a fantastic pace.

I’m really surprised that given the quality of the writing and the plot here that I haven’t come across this book earlier.  I would highly recommend Glimpse to YA readers, and particularly those at the younger end of the age bracket, who enjoy paranormal and mystery, who like a story with a lot of action and humour, and don’t mind a bit of a scare factor.  I can’t wait to get my paws on the next two books in the series.  Hooray! Another new author to follow with interest!