Welcome to another exciting episode of my Fairy Tale Makeovers review series!  Today I have two retellings of the same fairy tale – Rumpelstiltskin –  he with the penchant baby thievery and silly name-guessing games. 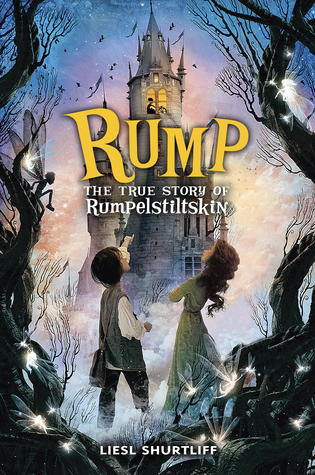 Rump: The True Story of Rumpelstiltskin

In Rump’s world, your name is your destiny.  Unfortunately, Rump’s mother died before she could get his full name out and so he has been stuck as the butt of many jokes ever since.  After accidentally finding out he possesses the ability to spin straw into gold, and then accidentally dooming the (greedy, selfish) miller’s (vacuous, unreasonable) daughter Opal to a life spent spinning gold for the king, Rump knows that he must step in to make things right.  But things take a turn for the (much, much) worse when Opal accidentally promises Rump her first-born son in return for his spinning.

Now, stuck with a magical ability he doesn’t want, a pre-emptive baby that he certainly doesn’t need, and a donkey that’s good for Nothing, Rump must use all his wits to overcome his expected destiny at the bottom rung of the social ladder.  With the help of his friend Red, some very unusual trolls and the power within himself, Rump might just be able to untangle this knotty dilemma…but he may have to fly by the seat of his pants to do it.

Why You Should Read It:

Shurtliff has done a great job here in creating complex, neatly interwoven plot threads that slowly build into a well thought out and satisfying narrative.  There’s a lot of humour in both the characters and the situation, and some fun new twists on the traditional tale.  I expecially enjoyed the trolls and their cheeky ploy to remain out of the way of humans.  All the elements of the original tale are here (except, possibly, the more violent bits) but they’ve been used in clever, creative ways to put the focus back onto Rump and how he will fulfill his destiny.

The main point of view here is Rump’s, and he’s a really likeable character.  With Rump leading the narration, this book will certainly be a hit with middle grade-aged kids looking for a familiar(ish) tale of magic with lots of humour to lighten things up.

And now for the grown ups….

Don’t let the rubber duck on his head fool you, Rumpelstiltskin is one cranky, murderous, rabbit-stabbing dwarf.  After escaping from The Tower in Thiside (the place where all the fairy tale mob live) with the help of the (clearly mad) Mad Hatter, Rumpelstiltskin immediately sets off to pass on a message to the unsuspecting Robert Darkly in Othaside (the place where us mob live).  On unexpectedly discovering said murderous dwarf in his bathtub, Robert is clearly somewhat distressed to discover that his world is about to get a damn sight weirder (and more dangerous).  And all this on the day that his girlfriend dumps him and he loses his job.

Luckily for Robert, he is immediately taken under the (metaphorical) wing of Lily (of the Agency) and introduced to the White Rabbit.  Along with a number of other (hitherto mythical) creatures, Lily and Robert must set out after Rumpelstiltskin and foil his dastardly plan before any more fluffy bunnies succumb to the unforgiving steel of his blade.  But what Lily and Robert are about to find out is that the Dwarf’s plan may go deeper than any of them had ever expected…

Why You Should Read It:

We love a bit of silliness around the shelf and this book has silliness in bucketloads.  Not just silliness though, oh no.  There’s a fair bit of violence towards sweet defenceless fairy tale creatures.  There’s warrior gnomes and random facts about the mechanics of sex between fairies.  There’s a smidgeon of old-ladies being subjected to hallucinatory shifts in reality. Really, there’s something for everyone over the age of eighteen to be found here, and a lot of it is pretty funny.  Buckley maintains a light, humorous tone throughout and there are many little asides that are designed to throw out your train of thought and give you an unsought-after giggle.  Rumpelstiltskin is suitably evil and the Mad Hatter is appropriately devious and conniving.  Robert is adorably clueless and the White Rabbit imposing in his managerial capacity.  Overall, it’s just a good, fun romp and you should probably give it a go if you’re into retellings. Or even if you’re not.

Once again, it feels like the familiar fairy tale character that we know and love (to hate), but there’s a strange and beguiling Urban Fantasy twist going on that reminded me of books like Neverwhere by Neil Gaiman and Un Lun Dun by China Mieville but with a lighter tone.  It’s got an atmosphere all its own though and I’d like to see what other delights Buckley has/will come up with.

So there you have it.  Two takes on the famous Rumpelstiltskin, Esq.  I’d love to know about any other Rumpelstiltskin retellings out there because I’ve grown quite fond of the repugnant/redeemable little guy.

Until next time,
Bruce

*I received a digital copy of Stiltskin from the publisher, Curiosity Quills, in return for an honest review.

7 thoughts on “Rump and Stiltskin: Fairy Tale Retellings for Young and Old(ish)…”