Welcome to the Shelfdom, one and all.  Prepare yourselves for I have for you today a book that is 1 part charming and 3 parts creepy – it’s the new release middle grade spook-fest that is The Night Gardener by Jonathan Auxier.  Auxier is the author of the very successful YA title Peter Nimble and His Fantastic Eyes and I was very interested to see what this new outing would be like, given that it was described as a traditional Victorian horror story.  I received a digital copy of the book from the publisher via Netgalley – thanks!

In The Night Gardener, we are introduced to Molly and Kip, two almost-orphans from Ireland, as they attempt to make their way to Windsor manor to work as servants.  On their way there, they hear rumours of things that are not quite right with the manor house and on arrival, discover that on all accounts, things aren’t quite right with the family either.  The Windsors seem pale and sickly, and even stranger, an enormous tree appears to be growing from within the very house itself.  After Kip sees a shadowy, sinister figure in the fog, Molly hears footsteps in the house during the night, and the family continually have terrible nightmares, it becomes clear that something very odd and dangerous is afoot at Windsor manor.  Can Molly and Kip stand their ground against the looming threat or will they be chased out of the best home they’ve known since they left Ireland? 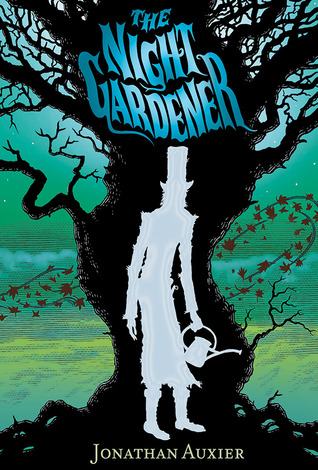 * you enjoy a spot of gardening to reconnect with nature. At night. In the middle of the woods. While wearing a top hat cocked at a jaunty yet sinister angle.

As soon as I saw the cover of this one I knew I had to acquire it.   Luckily, the eerie oddness promised by the cover was delivered by the creepy, atmospheric and engaging tale told behind it.  Auxier has created a classic take on the atmospheric Victorian horror genre with gently flawed characters, settings that are at once familiar and strange, and twists and turns that give life to some very suspicious villains indeed.  Molly is the very definition of a plucky, headstrong young Irish big sister, while Kip soldiers on with “Courage” despite his own hardships.  The Windsor family play their respective roles just how one would expect, and wise old storyteller Hester Kettle provides just the sort of guidance that Molly needs to create a fitting ending to her own story.

The Night Gardener himself is a remarkably frightening character, given that he has no dialogue at all.  Auxier’s villainous, loping creation, along with its brooding, timber counterpart is original and definitely the right sort of tinder to kindle a few nightmares amongst younger readers.  The author has done a fantastic job with pacing in this novel, as it shifts between practical problems facing the Windsors and young Molly and Kip, and the more supernatural issues arising from the prowling Night Gardener.  While the supernatural interludes set off that tingling spine, the story always moves on to more comforting waters, so it is a great pick for those who like to experience their fear vicariously, in manageable chunks.

The best thing about this book is that it’s more than a story about a supernatural terror – it touches on family relationships, the motives for our less-than-honourable actions, and ways in which we can alter our own stories to be whatever character we need to be.  I would highly recommend this for anyone who is a fan of books with a reasonable factor of creepiness, and is looking for a story with a unique supernatural villain.

Until next time, don’t trust an indoor plant, whatever it tells you…