Top of the Neverland to you all! Today I have a slightly unusual candidate for my fairy tale makeover series, in that the story being retold isn’t exactly a fairy tale. But it does have fairies in it. So that’s close enough for me.  I speak, of course, of Alias Hook by Lisa Jensen which tells the well-known story of Peter Pan from the point of view of the much-maligned Captain Hook, and does so in the most unexpected of ways.

I must admit firstly that I have never read, nor indeed watched, the story of Peter Pan, on account of the fact that Peter himself always struck me as a smug little git.  For that reason, I only have a vague knowledge of the original story, but this did not hinder my enjoyment of Alias Hook one jot.  In fact, I probably enjoyed it more, because I was already sympathetic to Hook’s viewpoint.  Anyway, let’s get on with it before I start to waffle.

James Benjamin Hookbridge was by all accounts a scoundrel of the highest order when he walked in the ordinary world.  However, after being mysteriously whisked away  with his ship and crew to a land ruled by a young, flying vagabond for centuries on end, it could only be said that Hookbridge, now the dastardly Captain Hook, is inwardly a broken man.  For years unnumbered, Hook has watched his crews brutally murdered by Pan and his Boys, while he himself is drawn, constantly and  unwillingly, into Pan’s violent and manipulative games.  But when a grown-up woman appears out of thin air on Hook’s ship, it is apparent that Pan may be losing control over his land of eternal youth.  Is it time for Hook himself to grow up? And can he throw off the shackles of his villainous past, or will he be trapped forever in the Neverland to suffer Pan’s twisted version of eternal life? 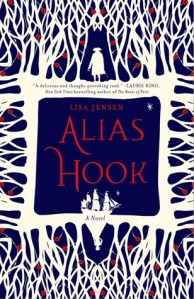 *you think Peter Pan is a smug little git

*you have ever been forced to play the same game with a toddler or small child ad nauseum, with no hope of escape in sight

I was totally surprised by how cerebral this book turned out to be.  I was expecting something light, with a bit of parody; a cheeky protagonist with a “stickin’ it to the man (boy)” attitude, but this book was by turns dark, insightful, poignant and …well…dark again.  It really is a grown-up’s tale of redemption, focusing on the dilemma of how one might successfully change the habits of a lifetime (or several lifetimes, as the case may be).

As I mentioned, you really don’t need to know very much about the original Pan story to get into this book, as only the bare bones are used – the not-growing-up clause, the Wendys who mother the Boys – and I felt that this was a real strength as it allowed Hook to rule the story on his own terms, as it were.  To that end, there’s plenty of mindless violence – mindless in the sense that it is carried out mindlessly, not mindless in the sense of being gratuitous – a bit of rumpy-pumpy, at least one highly anti-social fairy and a whole bunch of soul-searching.  The addition of Stella (the aforementioned grown-up woman) is both the catalyst and the obstacle to Hook’s eventual redemption and bid for freedom.  The final epiloguey ending bit was both expected but fresh.  In fact, if I had to describe it in one word I’d say it was just darling.

(See what I did there? Geddit?!! Wait, the kids in the original Peter Pan have the surname Darling don’t they? I hope so, otherwise that joke is going to be a major flop).

Alias Hook had me dwelling on it days after I’d finished reading, which is the mark of a good read.  If you are looking for a book that you think will be reasonably familiar and predictable then this isn’t the book for you.  Alias Hook has a lot more going for it than your average “alternate point of view” retelling, so I suggest you set aside some quality reading time and delve into the one-part magic, two-parts torment experience that is Hook’s Neverland.

Alias Hook is published on July 8th and I received a digital copy from the publisher via Netgalley.