Ahoy my Literati-hearties!  For today’s double-dip review you will need to select a snack that evokes youthfulness and responsibility, coupled with a dipping agent that is equal parts mystery and levity because the middle-grade indie titles that I now present to you are the perfect blend of the aforementioned qualities.  Personally, I’m going for chocolate-coated, ruffle-cut, salted chips paired with a marshmallow and avocado dip, but I trust that you’ll make the right choice for you.  Let’s dive in! 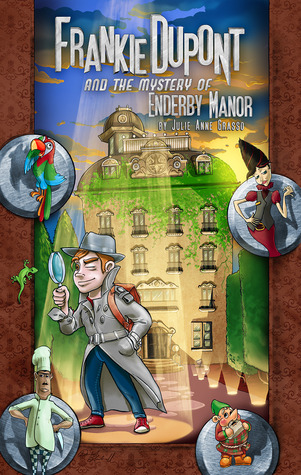 Frankie Dupont and the Mystery of Enderby Manor by Julie Anne Grasso (Australian! Woo!) follows a snippet in the life of Frankie Dupont, young aspiring detective.  Upon noticing that his cousin (and good friend) Kat has not made her daily pre-school phone call, Frankie soon discovers that Kat is missing from her parent’s room at Enderby Manor.  Knowing that the chances of the police assigned to the case, and in particular the incompetent Inspector Cluesome, finding Kat are less than that of a wet tissue in a wind tunnel, Frankie immediately springs into action, questioning the staff at the Manor and finding very interesting clues and suspicious characters aplenty.  But as Frankie uncovers more pieces of the puzzle, things just don’t seem to fit and it looks like Kat may in fact be stuck in a place that’s beyond the help of an ordinary boy (or even an extraordinary one like Frankie).  With Kat’s time running out, Frankie and his new friend Lachy must work together to outwit and outmanoeuvre some of the Manor’s quirky residents who definitely do not want this mystery to be solved.

…a fun and fast-paced mystery adventure that will be right up the alley of any budding detectives in the middle grade age bracket.  There’s plenty of off-beat and silly humour here that is pitched perfectly for the intended age-range and the characters are also of the slightly cartoonish sort that are reminiscent of the characters found in the works of Roald Dahl and David Walliams.  There’s the chef with a pet parrot that inevitably contradicts everything he says, a remarkably unhelpful little person (or is he?) who hangs about around the gardens and then, of course, there’s Inspector Cluesome fulfilling the role of annoyingly pompous know-nothing know-it-all.

I could not predict the fantastical twist that is at the heart of the mystery and I was both surprised and pleased at the turn of events that saw a bit of wibbly wobbly, timey-wimey science fiction injected into the plot.  The ending was quite satisfying really, because it came out of the blue and really gave the plot a bit of a boost just as the mystery was being solved.

…you’re looking for a plain, garden variety mystery story.  A little bit of bending of the laws of time and space is at the heart of solving this mystery, so if you’re just into your standard, all-laws-of-the-universe-are-obeyed, I-can-guess-the-ending-before-it-happens sort of detective story I can imagine that you will be heartily disappointed with this one.

I suspect that this story will also appeal much more to the target age range than those outside of it.  I enjoyed it as an adult reader, but it is very much pitched at middle-graders, so don’t expect anything too deep going into it.

I would recommend this book to anyone in the middle grade age bracket who likes a good puzzle or two, is enamoured by the thought of a manor house with a garden maze (and a few secrets hidden away inside the walls), and likes a surprise twist in their reading.  The cartoon-style  illustrations scattered throughout the book also add kid-appeal and provide a nice visual element to the story.  This is the first in a new series about Frankie and his detective work and for that reason this should also be a great choice for kids whose reading appetite is insatiable once they find a character they like.

Now, onto book number two in this double dip! 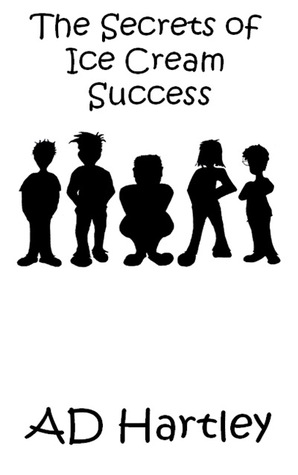 The Secrets of Ice Cream Success by A. D. Hartley introduces us to Carlo Leodoni, your typical fourteen year old boy who, as it turns out, is about to inherit his family’s ice cream factory after the untimely (but unrelated) deaths of both his parents.  From spending his summer holiday trying not to make a fool of himself in front of the cute girls who visit his dad’s ice cream van, Carlo is suddenly catapulted into the cutthroat business of ice cream production and has to deal with his dad’s business partner Mr Randolph, who thought the factory would be left in his capable hands, and the local competition, Mr Hill, who is doing all he can to keep Leodoni’s from reaching the top of the ice cream trade.

With the help of his best friends, and with a bit of supernatural assistance, Carlo decides that he will do his best to bring Leodoni’s back to the top of its game – but he hasn’t reckoned with the tyranny of sabotage, the unexpected resurfacing of someone Carlo thought was out of the picture, and a rumour that threatens to change everything Carlo has ever thought about himself.  Unless Carlo can find some answers and take control of the factory, specks in the ice cream might be the least of his worries.

…an original story packed with humour, believable characters and a bit of the ol’ supernatural charm.  This book is probably going to appeal most to the high end of the middle grade bracket and the lower end of the YA audience and along with a fantastic friendship and adventure tale, it features some cracking mysteries to solve and red herrings to trick the reader into complacency.  The story moves at a steady pace and there are enough twists here and enough paranormal elements to keep the reader guessing to the very eventful and emotional ending.  The great thing about this book for me was the depth of the characters and the banter that goes on between the group of friends – it gave the book a light, fun atmosphere that nicely balanced the darker aspects of the plot.

…you aren’t prepared to suspend your disbelief in a big way in the first few chapters of the book.  This paragraph might contain a few spoilers, so skip to the next one if that offends you…Hartley’s got gumption, I can tell you that, because in the very first chapters of the book he reveals a quite shocking secret about Leodoni’s ice cream – all the more so if you work in any part of the food safety and regulatory business! – and then kills off Carlo’s father in possibly the most ridiculous death ever penned.  While it turns out that this death is necessary to the plot, the manner of the death was so bizarre and unexpected (to me, anyway!), that I nearly put the book down.  I’m glad I didn’t though, because I would have missed a fun and original story.  But heads up, anyway.

The plot of this book really stood out to me as something different for the target age-bracket.  A thoughtful mix of summer adventures with friends, ghostly goings-on and coming of age tale, Hartley has done a great job at creating a book that is both engaging and light-hearted while at the same time featuring grittier elements of grief, family secrets and the ugly side of getting ahead in business.   This would be the perfect read for young people who want something a bit out of the ordinary, that embraces the paranormal without a single vampire/werewolf/human love triangle in sight, and features ordinary kids in an extraordinary situation.

So there you have it – two more reasons to get some indie into you!  I was lucky enough to be offered copies of both of these books by the authors in exchange for honest reviews.  I’m sure the authors would also love it if you visited them on Goodreads or Twitter to tell them how intriguing you find their books.  Here are some links for you to do just that: