I seem to be on a bit of a minor roll at the moment, with unexpectedly wonderful books popping up here and there, and I am pleased to be able to add another to my (very short) list of “Top Books of 2015”.

Today’s book is as unexpected and wonderful as it is singular and extraordinary, and I was lucky enough to receive a copy from the publisher, Angry Robot, via Netgalley. The tome in question is The Singular and Extraordinary Tale of Mirror and Goliath by Ishbelle Bee, being the first in a new series relating The Peculiar Adventures of John Loveheart, Esq. I hasten to warn that this book, with its oddities and profanities, will not be for everyone but if you are hankering after a blindingly original array of characters forced into unruly submission by an author with an obvious mastery of the written word, then there is a good chance that this book will be for you.

1888.  A little girl called Mirror and her shape-shifting guardian Goliath Honeyflower are washed up on the shores of Victorian England. Something has been wrong with Mirror since the day her grandfather locked her inside a mysterious clock that was painted all over with ladybirds. Mirror does not know what she is, but she knows she is no longer human.

John Loveheart, meanwhile, was not born wicked. But after the sinister death of his parents, he was taken by Mr Fingers, the demon lord of the underworld. Some say he is mad. John would be inclined to agree.

Now Mr Fingers is determined to find the little girl called Mirror, whose flesh he intends to eat, and whose soul is the key to his eternal reign. And John Loveheart has been called by his otherworldly father to help him track Mirror down… 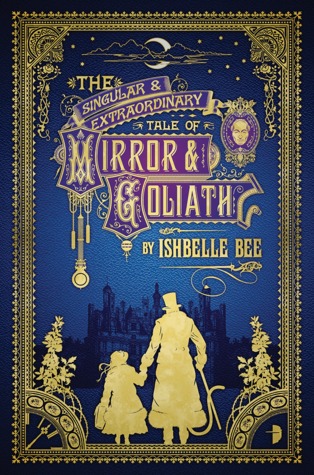 Here, then, are five things I’ve learned from

The Singular and Extraordinary Tale of Mirror and Goliath

1. Never trust a man in a waistcoat. Particularly one made of whimsically decorated fabric.

2. Never trust anyone who names themselves after an opposable body part.

3.  Should you ever be invited to take an especially close look at the workings of a coffin-sized clock, it would be prudent to decline.

4. When being pursued by demons and humans of dubious origin, it is recommended that you seek the services of a large, battle-trained protector with the ability to shape-shift.

5. Socks, while generally considered an unimaginative gift for older male relatives, are also much less likely to see the giver murdered for the immortality-inducing properties of their soul.

I’m sure I’ve mentioned more than a few times how highly an original story is valued in my reviewing world. Being that I churn through a stupidly high number of books a year – my Goodreads challenge chart is telling me that I have read 68 books this year so far – it is only reasonable to expect that much of the time there will be a niggling feeling of having read something like the story in which I find myself immersed, at any given time, before. It is a real and almost tangible treat then, to come across a tale about which one can truly say, “This is different!” The Singular and Extraordinary Tale of Mirror and Goliath is one such book and I put its originality down to the obvious and remarkable talent of the author.

The story is all over the place – and I mean this in the exciting and invigorating sense, not in the “Good Lord, this book is all over the place!” sense that is usually uttered with head in hands – as various characters (both main and minor) muscle in on the telling. The setting ranges from a woody cottage to the depths of the Underworld to the deserts of Cairo to a less-than-reputable clock shop. The characters are human and demon and almost, not-quite. There’s violence and one-liners and escapes and unsavoury dinner parties. Over the course of the tale, a number of characters are referred to as mad – “mad as a spoon”, “mad as a hat”, “mad as scissors” – and while a definite atmosphere of mild insanity hangs over the proceedings, at no point did I feel that the author was letting things get out of (her) hand.

Apart from the welcome and inspiring originality of the tale, the shining light has to be the book’s narrative style. Bee manages to be simultaneously lyrical and distinctly unnerving, mixing dry wit with outlandish, almost slapstick violence and a sense of the poetical with deeds unequivocally wicked. While the title refers to Mirror and Goliath, the main character here turns out to be John Loveheart, Esq., who embodies this sense of innately flawed hilarity and carries it to the nth degree.

By the end of this book I was utterly convinced that I want to read more from Ishbelle Bee, whether in this series or elsewhere. It is rare, in my experience, to come across such finesse with the use of language that one feels excited just to be experiencing the words on the page. I therefore have to commend this book into place number four on my “Top Books of 2015” list, which is growing at a slow but steady pace.

5 thoughts on “The Singular and Extraordinary Tale of Mirror and Goliath: A “Five Things I’ve Learned” Review…”