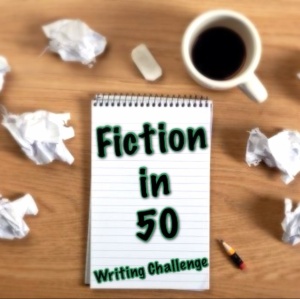 Just a quick reminder for the eager hordes hoping to join in October’s Fiction in 50 challenge, the prompt for this month is…

(You fill in the blank!)

To play along, create a piece of fiction or poetry in fewer than 51 words and add your link to the comments of my post on Monday.  For more detailed instructions and future prompts, just click on the button at the top of this post.

Now it’s not often that I choose to give up on a book but today I have one that I just couldn’t push on with.  I normally wouldn’t tell you about books that I didn’t finish on the blog – just quietly give some feedback to the publisher, pop a short, unstarred review on Goodreads and move on with my life – but I’m making an exception with this book because even though it didn’t resonate with me, I think it’s one of those middle grade books that will really appeal to middle graders, but maybe not so much to adults.

I received a copy of The League of Unexceptional Children by Gitty Daneshvari (possibly the greatest name ever bestowed on an individual, in my opinion) from the publisher via Netgalley.  Here’s the blurb from Goodreads:

Are you average? Normal? Forgettable? If so, the League of Unexceptional Children is for you! This first book in a hilarious new adventure series is for anyone who’s struggled to be noticed in a sea of above-average overachievers.

Why the average kids? Why not the brainiacs? Or the beauty queens? Or the jocks? It’s simple: People remember them. But not the unexceptionals. They are the forgotten ones. Until now!

I was drawn to this book for two reasons: firstly, I’ve got a thing for books with “League” in the title at the moment and secondly, for the resemblance the blurb bore to Patrick Ness’s YA offering The Rest of Us Just Live Here, which builds a plot around a group of kids who are NOT the chosen ones.   I thought this might be a middle grade offering of a similar, quite amusing premise (and it well might be, considering I didn’t finish it, and I haven’t read Ness’s work yet).  The thing is, there was nothing WRONG with the League of Unexceptional Children, it’s just that it didn’t really suit my tastes.

I felt a bit hot and cold on the two main characters, Jonathan and Shelley, as I found about half of their behaviour and dialogue funny, and the other half just plain annoying.  The chapter headings each had a “quote” from an average kid and some of these gave me a giggle and others I just found a bit odd. Similarly, the style of humour in the book just didn’t click with me, even though the plot moved quickly and there was a lot of banter and funny-enough situations in the chapters that I read.

I will admit to losing interest once the “mission” had been explained and that was the deciding factor in my deciding not to finish the book – essentially, the idea of the kids having to save a kidnapped vice president didn’t fire my imagination enough to make me want to invest more time in this one.

I suspect that this is the kind of book that readers in the target age range will probably enjoy due to the fast paced plot and the idea of “average” kids getting a chance to save the day.  For me as an adult reader though, I think Daneshvari succeeded a little too well in making the characters unexceptional.  It’s a case of irreconcilable differences between me and  this book, I’m afraid, but I’d be interested in what others thought of it, especially those in the target age group.