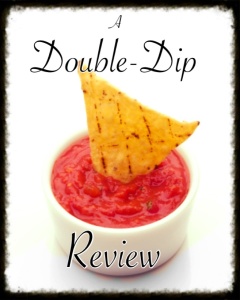 I hope that you have selected a snack that is easy to transport for today’s Double-Dip because if you haven’t, there’s a high probability that you might be wearing it by the end of the trip!  Both of today’s YA titles feature road trips and nicking off in a big way, so hold onto your snacks and let’s hit the road.

First up we’re travelling with Desolation, the second book in the Demon Road trilogy, by Derek Landy.  We gratefully received a copy of this one from Harper Collins Australia for review.  In case you missed our review of the first book in the series, you can check that out here.  And here’s the Desolation‘s blurb from Goodreads:

Reeling from their bloody encounter in New York City, Amber and Milo flee north. On their trail are the Hounds of Hell – five demonic bikers who will stop at nothing to drag their quarries back to their unholy master.

Amber and Milo’s only hope lies within Desolation Hill – a small town with a big secret; a town with a darkness to it, where evil seeps through the very floorboards. Until, on one night every year, it spills over onto the streets and all hell breaks loose.

And that night is coming.

…another adrenaline-fuelled trip featuring violence, banter and a whole bunch of new characters.  The tale takes place in Desolation Hill this time around, a small town that might offer protection from the Hounds of Hell, and as small town oddities go, Desolation Hill has the mother of all quirks.  I won’t spoil it for you by revealing what it is, but I can tell you that Amber isn’t the only supernatural being getting around the place this time around.  I enjoyed the plethora of new characters that were introduced in this book, which include (but are not limited to) a Scooby-esque supernatural crime fighting squad that travels the Dark Highway in a van, some town officials that are older than they look, two old actors in the middle of a personal feud, a very shady police department and a character from urban legend come to terrifying life.  The fact that the story unfolds in one place means that more space is given over to developing characters and delving more deeply into the nature of Amber’s demonhood.

…you’re not up for face-shredding violence and general debauchery.  If you’ve read the first book you’ll notice that apart from the violence, Landy doesn’t shy away from including really horrible misogynistic and/or generally depraved characters.

I felt that this book had a bit more of a male skew to it, with some token lesbian action and more of the poor attitudes to women exhibited by many of the male characters.  While I enjoyed the changes in the story and the interesting possibilities generated by the twist at the end, the general tone of this book felt more adult and grimy that the first.  It’s certainly a series for the upper end of the YA bracket, merging into the adult market, rather than for younger readers.  I’m expecting that the final book in the series is going to shake things up even more.

Next up we have There Will Be Lies by Nick Lake, which has been shortlisted for the 2016 Carnegie Medal.  We received our copy from the publisher via Netgalley.  Here’s the blurb from Goodreads:

In four hours, Shelby Jane Cooper will be struck by a car.

Shortly after, she and her mother will leave the hospital and set out on a winding journey toward the Grand Canyon.

All Shelby knows is that they’re running from dangers only her mother understands. And the further they travel, the more Shelby questions everything about her past—and her current reality. Forced to take advantage of the kindness of unsuspecting travelers, Shelby grapples with what’s real, what isn’t, and who she can trust . . . if anybody.

Award-winning author Nick Lake proves his skills as a master storyteller in this heart-pounding new novel. This emotionally charged thrill ride leads to a shocking ending that will have readers flipping back to the beginning.

…an unscheduled road trip that will leave you wondering what’s real and what the future holds.  There is an awful lot going on in this book including a mysteriously protective and manipulative mother-daughter relationship, some magical realism with a possibly North American indigenous twist, and the limitations (and advantages) of disability.  Shelby is certainly an authentically teenage narrator who is obviously working things out along with the reader.  The ending is quite satisfying in a strange, unexpected sort of way – at least I was happy to see Shelby making decisions for herself, even if they were a bit odd from an ordinary person’s perspective.

…you’re hoping for a straightforward contemporary with some mysteries along the way. When the story begins to alternate between Shelby’s journey in the real world and her quest in the strange dream-state, I felt a strong preference for the bits anchored in reality.  In my opinion, the dream-state bits felt contrived and didn’t particularly add anything to Shelby’s actions in real life.

Overall, I was quite engaged with the real-life bits – which featured enough twists, reveals and unexpected surprises to carry the story on its own merits – and could take or leave the dream-state bits.  This is certainly an ambitious way to tell a story and I’m sure some people will love the parallel narratives of Shelby’s life, but for me there was too much interference from flights of fancy in what was essentially an absorbing read about a teenager with an atypical past discovering who she is and who she wants to be.

If you’re in the mood for a road-trip featuring violence and/or the supernatural, you could do worse than pick up one of these two new release offerings.  Let me know what you think!

One thought on “A YA, Road-Trippin’ Double Dip of Lies and Desolation…”