Today’s Read-it-if Review is for a nonfiction title that will be an absolute winner with anyone who has ever been a fan of Lego and its uses.  We were excited and more than a little grateful to receive a copy of Brick History: Amazing Historical Scenes to Build From Lego by Warren Elsmore from the good folk at Allen & Unwin.  Rather than keep you waiting any longer (which is as painful as stepping on a Lego brick), we’ll get stuck in with the blurb from Allen & Unwin’s website:

Using LEGO bricks, artist Warren Elsmore and his team recreate stunning historic scenes, from the beginning of life in the pre-historic era right through to the inauguration of Barack Obama.

Brick History is a celebration of humanity and its achievements, and of moments in time that changed the course of history. To faithfully recreate each scene or image, Warren uses only standard LEGO bricks-and a lot of imagination! Choosing the right piece, color or orientation is crucial to this process, enabling the models to reflect the spirit of the time through these iconic plastic bricks.

As the book walks through history, the LEGO recreations draw from a 60-year history of the toy itself and tie into many of the company’s most popular themes. In this way, Brick History reveals the adaptability of LEGO to its full extent.

Whether you are a fan of LEGO, interested in world history, or just fascinated by the use of LEGO as a modeling medium, this book promises to take you on a fascinating journey into the past and around the globe. 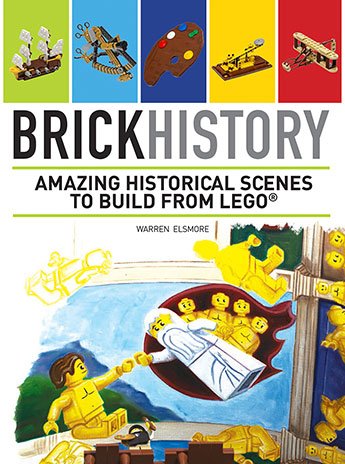 Read-it-if:
* you are a teacher looking for the kind of book for your classroom library that will have your students tearing each other’s eyes out in an attempt to be the first to lay hands on it during silent reading time
* you have always wanted to know how to make round shapes from square bricks
* you find learning historical facts and dates interminably boring and would prefer that such events were jazzed up with hilarious Lego head facial expressions
* you’ve ever considered creating a tiny working model of an orrery, depicting the process by which the Sun, moon and earth orbit one another, but were stymied due to a lack of easy to follow pictorial instructions
* you really freakin’ love Lego
What an awesome concept for a book!  We were palpably excited on seeing this title come up in the catalogue and couldn’t wait to flick through its attractive, easy-to-hold, fully illustrated format when it arrived.  This is going to be a no-brainer success for anyone, young or old, who enjoys Lego.  Obviously, the focus of this book is on historical events, but we were surprised (and delighted) to note that in between the historical depictions are instructions on how to make various related items, including but not limited to, a tiny model of the RMS Titanic, the aforementioned orrery, an Egyptian shadow clock and a brickish representation of Mahatma Gandhi.
The choice of these DIY models is inspired, because many feature building techniques that the run-of-the-mill Lego enthusiast may not have previously encountered, including how to create curves using straight bricks, and methods of building that allow for multiple changes in colour in a limited space, for instance.  I can imagine young builders really getting stuck into this title and developing their building skills quite quickly, before going and showing off to their friends.  The beginning of the book also features some handy notes on how to take photos of your completed models to show them off in their best light.
The only problem I had while reading is that the historical events selected here are very America and Euro-centric. Obviously, in covering everything from the Big Bang onward in a finite amount of pages, there has to be some subjective selection regarding what gets put in and what gets left out.  I was disappointed though at the lack of events from outside Europe and the US.  For Asia, India and Oceania as a whole, we are only treated to six events out of seventy-six and of these, only the construction of the Terracotta Army and the handover of Hong Kong back to China (itself a Euro-dominated event) are depicted as a double page spread; the rest are given in instructional format.  Africa is only represented in the election of Nelson Mandela as president of South Africa and again, only in an instructional format, rather than as a historical scene.  Other readers may not even notice this, but I would have liked to have seen a broader scope of human history represented here.
Despite that small disappointment, this is still a ripping tome that will have adventurous builders busting out their obscure brick pieces and getting to work.  I’d definitely recommend grabbing this one for your permanent shelf while I seek out the already-published titles in Elsmore’s series: Brick City, Brick Wonders, Brick Vehicles and Brick Flicks.
Until next time,
Bruce