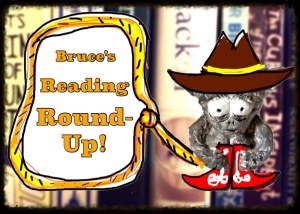 Welcome, welcome, welcome to another Reading Round-Up (do you feel welcome?)!  Today we are going to encircle a collection of titles for the middle grade age group that are high on humour and jolly good fun.  And zombies and deadly necklaces and mummies and other slightly frightening stuff.  But I’m sure you’re up for the challenge, a brave thing like you!  Saddled up?  Let’s crack on!

st up we have Zombified: Outbreak by C.M. Grey, being the third book in the humorous Zombified series.  We gratefully received a copy from Harper Collins Australia for review and wish to offer them our ongoing warm feelings because they provided us with a book to fulfill the “Z” criteria of our Alphabet Soup Reading Challenge!  What a weight off our collective minds! 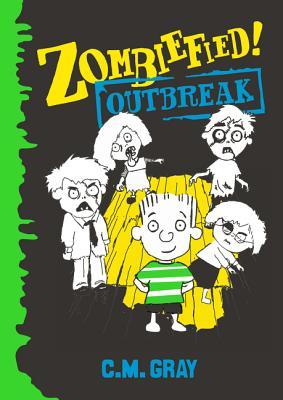 Ben, twelve-year-old half-zombie, has his powers under control and life seems to be carrying on as normal, until his older brother, Michael, disappears, leaving nothing but his game machine and a cloud of glitter in his wake. When Ben and Sophie start to investigate, little do they realise that they are about to uncover some secrets that will blow their understanding of zombie issues right out of the water!

…this is a fun, adventure-filled zombie romp speckled with illustrations throughout and featuring some larger-than-life (or undeath) characters.  I have been keeping an eye on this series as books have been published but this is the first I’ve managed to pick up.  The back story is briefly explained and I found that I didn’t have any trouble picking up the thread of the story or the characters.  Ben is a super-likable young lad who just seems to want to get on with his half-life and keep outsiders’ knowledge of his “condition” to a minimum.  Sophie is a stalwart friend and I really enjoyed the loyalty that they show each other, even in situations where it may be in the best interests of each to cut ties with the other.  It’s refreshing to see a boy-girl friendship taking centre stage in an age bracket that is often plagued by “boy book” and “girl book” characterisation.  While this was a pretty amusing adventure, with some classic reveals, I think  it is one that will be best enjoyed by the target market, rather than adult readers of middle grade.  Having said that, I think I will be taking some time to seek out the first book in the series to see how Ben ended up as a half-zombie because he’s certainly personable (zombie-able?) enough to make me want to go back for another bite.

Next up we have Somebody Stop Ivy Pocket by Caleb Krisp, which we received with some trepidation from Bloomsbury Australia for review.  If you have chanced upon our review of the first in the series, Anyone But Ivy Pocket, you will understand from whence our trepidation sprang (sprung? springed?). 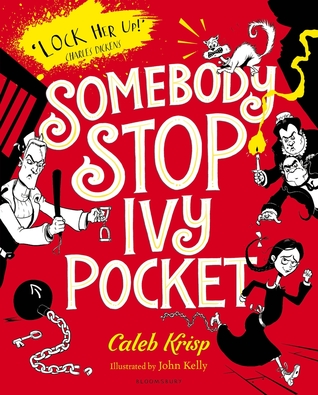 Ivy Pocket is working for a pair of unsightly undertakers, reading poems for the about-to-be-deceased to ease them on their way. When Ivy’s necklace shows her images of Rebecca (the supposedly dead), Ivy must try to puzzle out a way into a whole new world and stage a rescue.

…it might surprise you to hear, given our rather frosty reception of the series-opener, that I found this book considerably more tolerable than the first.  I will even admit to letting out a few guffaws at Krisp’s pointy, pointy dialogue.  While the inherently irritating Ivy is still up to all her old tricks, they didn’t seem quite so insufferable this time around.  I suspect that the story, which involves some very shady funeral directors, was closer to my preferred narrative in middle grade books.  Having said that, I still couldn’t say that I really enjoyed the book.  Ivy’s inability to take obvious hints with regards to major plot twists was still too infuriating to be borne.  There is something about the character of Ivy that is a bit like Rowan Atkinson’s Mr Bean.  Watching that television show was like watching a car crash in slow motion: everyone but the protagonist could see the outcome, but were powerless to stop it and forced to endure every agonizingly awful second of it.  Except I got many more laughs out of Mr Bean than I have from Ivy.  I suspect that Ivy and I are just too different to be friends.  Still, the lass is getting plenty of love from other quarters so don’t let my curmudgeonly attitude put you off.

Finally, we have a super-engaging encyclopaedia of the damned, of a sort.  We received a copy of Frightlopedia: An Encyclopedia of Everything Scary, Creepy and Spine-Chilling, from Arachnids to Zombies by Julie Winterbottom and Rachel Bozek from the publisher via Netgalley. 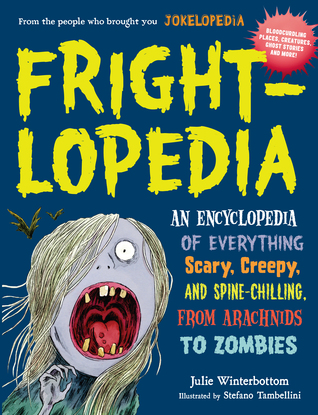 Frightlopedia is an easy-to-read collection of a diverse range of scary stuff. From vampires and zombies to bizarre burial practices and creepy insects, Frightlopedia has you covered if you are in the mood for learning about things that go bump (or slither or boo) in the night.

…this is actually a really well put-together, informative and fun non fiction text.  Far from being a “kid’s book”, I found myself drawn in to some of the interesting entries, such the monastery whose crypt contains the perfect conditions to naturally mummify corpses so tourists can wander through and have a look.  There are cryptids, bizarre buildings, deathly illnesses and nasty humans to explore and learn about and it’s all set out in an enticing format. Entries are organised alphabetically and there are plenty of absorbingly creepy topics to get one’s teeth into.  Each topic is addressed in one to two pages, accompanied by illustrations or photographs, and some topics even include an activity for kids to complete so that the frights keep on coming.  I was pleasantly surprised by the quality of this book and would highly recommend it to the  fan of frightful happenings of your acquaintance.  It would make a fantastic gift book or the perfect tool to quieten kids down in the classroom!

Boo-tiful Books; Learning Made Creepy; Faces and Places (you don’t want to meet)

I hope you’ve found something in this lot of frighteningly good middle grade titles and have duly lassoed at least one to drag home to your reading pile.

One thought on “Bruce’s MG Reading Round-Up: The “Quite Frightening…ly Good” Edition…”