You might want to put aside any distractions before reading this review, because today’s book is one that will require your full attention.  Nevernight by Jay Kristoff is a new release YA (although probably closer to adult) fiction novel set in a whole new world that is worth diving into if you have the time to devote to it.  There’s a great deal of buzz around this book at the moment, and having finally finished it, we can see why it’s receiving such high praise.  We received our copy from HarperCollins Australia for review (thanks!) and here’s the blurb from Goodreads:

Destined to destroy empires Mia Covere is only ten years old when she is given her first lesson in death.

Six years later, the child raised in the shadows takes her first steps towards keeping the promise she made on the day that she lost everything.

But the chance to strike against such powerful enemies will be fleeting, so if she is to have her revenge, Mia must become a weapon without equal. She must prove herself against the deadliest of friends and enemies, and survive the tutelage of murderers, liars and demons at the heart of a murder cult.

The Red Church is no Hogwarts, but Mia is no ordinary student. The shadows loves her. And they drink her fear. 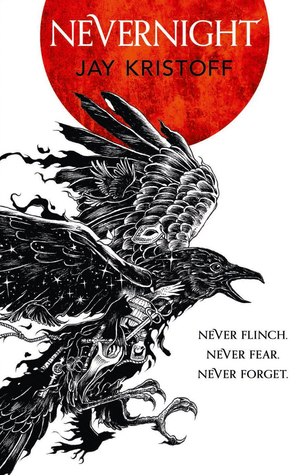 *you have been aching, yearning, praying for an upper YA (really, almost adult fiction) tale set in a wholly original world, featuring deeply explored characters, evocative and masterful prose and the promise of a trilogy that is worth waiting for

Two things I have to tell you about this book straight off are: (1) It’s a right old chunker at 643 pages and (2) while the writing was obviously of a high quality right from the very first page, this one was a slow-burn for us, but one that we warmed to more and more as time went on.  Initially, on seeing how big this book is, I didn’t think I’d be able to get through it in a reasonable amount of time given my review schedule, but the first few chapters are so lyrically written, with such a distinctive and engaging voice, that I was sucked in almost immediately.

The book is split into three parts.  The first deals mostly with Mia’s family history and the events that have led her to seeking a place in the Red Church – the guild (society? club? religion?) of murderers and assassins.  Straight off the bat there are some pretty explicit sex scenes and hardcore language, so I wouldn’t be passing this one on to any thirteen-year-olds unless they are of the particularly worldly variety.  The second part felt like nothing so much as a Hogwarts for murderers, and although it seems odd for such graphic content, the middle of the book really did exude an undercurrent of every “boarding school” story ever written (although with far less ginger beer and midnight feasts).  I was definitely far more engaged during this part of the story, but it was also during this section that I started to lose hope that I would ever finish.

So I put the book down.  Faced with the pressures to finish such a massive tome, I crumbled and nearly decided to abandon it, despite my enjoyment of the story.

But then….then my friends, fate threw me a line.

I somehow managed to find some uninterrupted reading time and decided to plough on with Nevernight until I finished (or died in the attempt).  And it was in doing so, that I really found an attachment to the story and the characters.

By the third part of the story, there have been so many killings that it’s a wonder anyone is left in the Red Church at all.  In fact, if you removed every mention of a slit throat, stabbed chest, or other flesh wound, I am certain that this book would come in at under 200 pages.  Regardless, the action takes a dramatic upswing in this final chapter as twists abound and all that we thought was a given is swooshed around and turned on its head.  Given the originality of the world here, I couldn’t really predict what might happen in the end anyway, but still I was surprised by the ending.  The final section of the book reminded me strongly of Garth Nix’s Lirael (the second of the Old Kingdom Trilogy and my favourite of the three), as Mia and Lirael’s stories resonated in certain parts and I found myself becoming far more sympathetic to Mia’s character.

Nevernight is definitely the kind of book that deserves undivided attention.   Once I found some time to devote solely to immersing myself in the story, my enjoyment in it doubled, so I would suggest if you are going to pick it up, to make it your “one and only” book until you’ve finished it.  The writing and world-building are hugely original and are best appreciated when given time to percolate through your brain.  While none of the characters are saints (nor claim to be), they are the most memorable bunch of cold-blooded murderers you could ever hope not to meet and I recommend delving into their story.

I can’t even imagine how the next two books in the series will pan out.

5 thoughts on “Nevernight: A YA, Read-it-if Review…”