Today’s book is a graphic novel for those who love a bit of creepy, atmospheric, magic-infused adventure, which, I am assuming, is all of you.  The Lost Boy by Greg Ruth is one that has been on my TBR list for quite some time, so when I spotted it at a great price in the Scholastic Book Club catalogue recently, I knew I had to grab it.  Here’s the blurb from Goodreads:

Some mysteries are too dangerous to leave alone . . .

Nate’s not happy about his family moving to a new house in a new town. After all, nobody asked him if he wanted to move in the first place. But when he discovers a tape recorder and note addressed to him under the floorboards of his bedroom, Nate is thrust into a dark mystery about a boy who went missing many, many years ago. Now, as strange happenings and weird creatures begin to track Nate, he must partner with Tabitha, a local girl, to find out what they want with him. But time is running out, for a powerful force is gathering strength in the woods at the edge of town, and before long Nate and Tabitha will be forced to confront a terrifying foe, and uncover the truth about the Lost Boy. 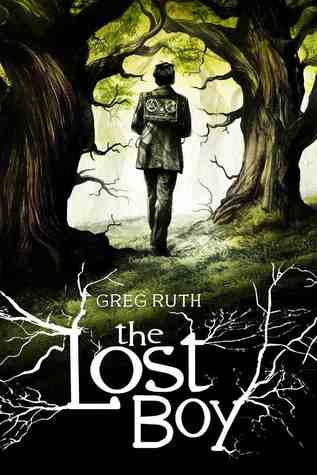 And here are Five Things I’ve Learned From The Lost Boy by Greg Ruth:

1. It is a fact of life that moving to a new house will always lead to an exciting (and possibly slightly sinister) discovery, usually concealed under a loose floorboard or other enticing, secret space.

2. The probability of exciting (and possibly slightly sinister) discoveries are exponentially increased if said new house is adjacent to a wood.

3. If, upon moving to a new town, you notice something out of place (such as a grasshopper riding a dog, for instance) that others don’t seem to be able to see, you can assume that an exciting (and possibly slightly sinister) discovery is imminent.

4. When moving to a new town, always make friends immediately with the strangest and most oddball of your neighbours.

5. On moving to a new house in which exciting (and possibly slightly sinister) discoveries are likely, ensure you have access to a range of historical recording devices in order to be prepared in case your predecessor has left some audiological clues as to their sudden disappearance.

I am so glad I actually made time to (a) purchase this book and (b) read it, because it is such an absorbing and atmospheric read featuring a well-developed world and enticing mystery.  The book follows two parallel stories – those of Nate, and Will, the boy who lived in the house Nate has just moved to, but who disappeared years before.  Without giving too much of the story away, Nate discovers a recording left by Will that details some strange sightings and happenings that Will has experienced, and opens up the mystery of the circumstances surrounding Will’s disappearance.  After Nate meets his new neighbour Tabitha, who also knows something about the mystery of Will, it is obvious that the pair need to investigate.  When some extremely strange visitors come calling however (including a talking doll and a deadly tree), it is obvious that Nate and Tabitha are going to have to risk much – and possibly even their lives – if they want to solve any mysteries anytime soon.

The illustrative style is quite realistic, which lends a sense of authenticity, and more than a little creepiness, to the events.  I was sucked in almost immediately by the allure of a historical mystery and the author does a great job of drip-feeding information about the non-human characters in the story so that the reader has to keep going if they want to find out the truth about these diverse and strange beings.

I had thought I had seen somewhere that there was a sequel to this one, but I can’t seem to find anything about it now so perhaps I was mistaken.  It’s a shame though – such a world could do with a follow-up story.  You can see some preview pages of The Lost Boy at Greg Ruth’s website, though, to see for yourself how exciting the book looks.

One thought on “The Lost Boy: A “Five Things I’ve Learned” Review…”