Yep, you read that title correctly – today’s books are a selection of monstery-ghosty tomes for the young and the slightly-not-so-young-anymore.  If you are into social history, cryptids or actual genuine science, you might want to strap on your spats and saddle up as we ride on it.  Yeehah!

A high quality meeting of science and mythology in which everyone’s favourite monsters are placed under the cold, hard microscope slide of fact. Kids can read up on the facts behind the myths to see if their favourite monster could exist in the real world.

…this is a beautifully presented tome featuring a topic that most kids love to read about (monsters, of course!), covering some pretty complex scientific principles in a fun way.  I was impressed with how much detail this book provided on the hows and whys of whether a monster could actually exist.  For instance, in the first chapter on Frankenstein’s monster, the book gives information about organ transplants, the electrical workings of our brains and bodies, historical information about grave-robbing and how early doctors made discoveries, and the principles of genetic engineering.  The page spreads are colourful, and although there is a fair amount of text per page, there are also plenty of diagrams and illustrations to break things up a bit.  I would definitely recommend this to those with a mini-fleshling who loves non fiction reads, especially those filled with wacky facts. 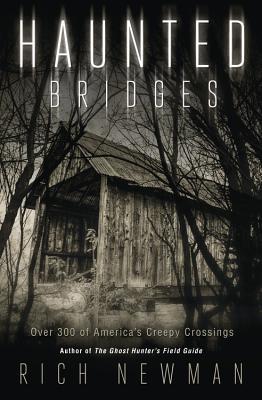 Apparently, ghosts love bridges.  This handy tome gives an exhaustive run down on the paranormal stories and phenomena associated with specific bridges across the US.

…this is a concise and well-formatted collection that neatly summarises social oral histories of the paranormal in localities across the US.  I will admit to being unaware of the apparently strong link between paranormal sightings and bridges, but this book certainly opened my eyes on that score.  The author is a self-confessed ghost-hunter of sorts and the aim of the book is to provide other would-be ghost hunters with some well-worn paths to tread in their pursuit of supernatural phenomena.  Happily though, the book can also be read as a collection of popular urban myths and oral histories of specific areas, as the author throws in some definite tongue-in-cheek comments throughout.  The book is divided into categories related to the content of the stories – hangings, invisible hands (this is a ghosty “thing” apparently), historical hauntings, criminal hauntings and so on – and this makes it easy to see the common motifs in stories from varied locations.  My favourite section was the “Unaccounted Oddities” chapter, which deals with bridges that have an original or bizarre story attached – a portal into hell, for instance or a unidentified monster or some sort.  If you live in the US, this would be a fun book to have handy when planning a holiday or day trip!  While these hauntings aren’t local to my area, I still found plenty in this book to draw me in and fire the imagination, as well as give me a picture of how social stories develop over time.  Recommended for when you’re feeling in a quirky, paranormal mood.

A collection of the author’s own encounters and research on a range of cryptids.  Includes witness accounts and case studies of the same.

…if you are a fan of monster-hunting, or just have an interest in mythical creatures that may (or may not) walk (or crawl or slither or swim) among us, then this will provide an irrepressible outlet for your interest.  I DNFed this one at 12%, after the first chapter on the Minnesota Iceman because although the author claims to be approaching these sightings from a scientific angle, it is obvious that he is, in fact, not.  He makes note of the fact that his viewing of the Minnesota Iceman as a child (that is, when the author was a child, not the Iceman), was one of the events that sparked his interest in monster-hunting and it is clear that this is a man who wants to believe.  He makes links between accounts of iceman-type encounters from places as disparate as the USA and China, glosses over the highly dubious provenance of the specimen, and makes wild leaps of fancy as to how the Iceman could have made it to US soil.  As I said, if you are looking for a book on cryptids that will pique your adrenaline levels, this is probably a good choice.  If you are looking for a book that actually takes a scientific approach to the evidence on cryptids, read Darren Naish’s excellent and engaging Hunting Monsters: Cryptozoology and the Reality Behind the Myths.

We’re going on a cryptid hunt; the extraordinary; beyond belief

Got your monster-trapping gear ready by now? Of course you have, because I know you’ll want to track down at least one of these beauties!
Until next time,

One thought on “Bruce’s Reading Round-Up: The “Monster McGhost-Face” Edition…”