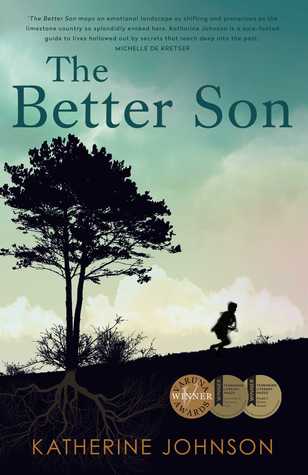 Today I’ve got an award winning Tasmanian tale for you that runs the gamut of historical fiction, contemporary family drama and literary fiction in an absorbing and darkly unfolding narrative.  We received a copy of The Better Son by Katherine Johnson from Ventura Press for review and here’s the blurb from Goodreads:

1952. Tasmania. The beautiful green, rolling hills of the dairy town Mole Creek have a dark underside — a labyrinthine underworld of tunnels that stretch for countless miles, caverns the size of cathedrals and underground rivers that flood after heavy rain. The caves are dangerous places, forbidden to children. But this is Tasmania — an island at the end of the earth. Here, rules are made to be broken.

For two young brothers, a hidden cave a short walk from the family farm seems the perfect escape from their abusive, shell-shocked father — until the older brother goes missing. Fearful of his father, the younger and more vulnerable Kip lies about what happened. It is a decision that will haunt him his whole life.

Fifty years later, Kip — now an award-winning scientist — has a young son of his own, but cannot look him without seeing his lost brother, Tommy. On a mission of atonement, he returns to the cave they called Kubla to discover if it’s ever too late to have a second chance. To go back and set things right. To be the father you never had.

Although this is a bit heavier going than my usual fare, I couldn’t help but be drawn into The Better Son by the imagery of epic landscapes and the gritty, hands-on experiences of Kip and his brother Tommy.  The book begins with a glimpse into Kip’s life now, the reader following along as he sets out to right a wrong about which we currently know nothing.  From here, we are plunged back into the turbulent world of Tasmania in post-war 1952, where returned servicemen try to pick up normal life where they left it to go to war and kids are workers, risk-takers and the repository of their parents’ shortcomings.

The section describing the boys’ childhood I found to be quite harrowing at times.  Tommy is the titular better son and enjoys his father’s constant favour, while Kip is left in the cold and the unfortunate recipient of his father’s ever-present wrath.  This family drama is played out against the boys’ discovery of an untouched cave system in the mountains near their home, and the juxtaposition of the freedom offered by the cave exploration and the oppressive, walking-on-eggshells atmosphere of home is striking.  After the accident, Kip’s home life becomes much worse, but it is at this point that the layers of secrets that have been kept through the years start to come to light, throwing new context onto information we have previously received.

The book flicks between perspectives and time periods – mainly those of Kip’s past and present, as well as the past and present of Squid, the farmhand who lives with the family and has a key role in the boys’ life.  This relieved the heaviness of the content somewhat, but I did feel at times like I just wanted to find out what actually happened to Tommy.  The pacing of the Tommy-mystery part was quite slow, and being the eager beaver that I am when there is a mystery involved, I was ever-hopeful that the answer was around the next page-turn.

There are not a lot of redeeming features to many of the characters in the book, although for the most part, we are privy to the circumstances under which certain decisions and behaviours originated.  One of the interesting things about the tale is that the motivations of almost all of the main characters are kept hidden until close to the end of the story, when secrets are revealed thick and fast and many events start to make more sense.

Again, this is not my usual fare, but I can definitely see why The Better Son has won no less than three awards to date.  It’s a tightly woven exploration of relationships, secrets and regrets with an undercurrent of self-sacrifice and the tiniest slivers of hope, set against the dramatic and deadly landscape of Tasmania’s mountain regions.  If you are looking for something to draw you in and make you feel like an interloper in the rocky lives of an ordinary Australian family of the 1950s, you should definitely give this one a go.

Inside My Worlds
Tundra Books