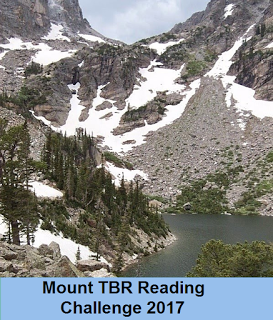 Even though I only discovered this challenge this year, I have found it so useful that I’m hopping on board again for 2017.  Bev at My Reader’s Block is a challenge queen and hosts this one yearly to get people motivated to start tackling their ever-growing TBR piles.  This year I signed up at the lowest level, Pike’s Peak, or 12 books and I have just recently achieved it, with a few extras added to the tally by the end of the year hopefully.  If you are interested in the challenge, just click on the image above to be taken to the sign up page, where you can find all the information about rules and restrictions and, most importantly, challenge levels.

I have decided in 2017 that I am going to once again attempt the lowest level of Pike’s Peak.  Twelve books was manageable this year, and I think committing to one book a month isn’t so daunting that I’ll feel too much pressure, but will nonetheless make a dint in my TBR stack.  I’m actually so motivated to keep at this challenge that I’ve already chosen the twelve books I’d like to tackle! 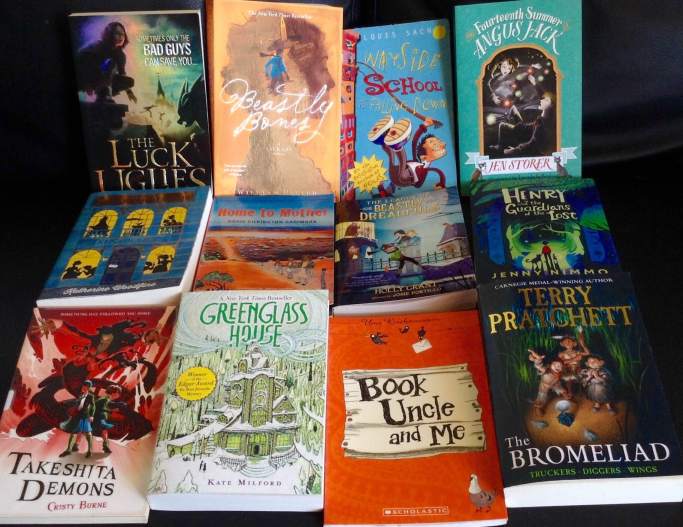 They are, in no particular order…

The Luck Uglies by Paul Durham

A middle grade fantasy romp that I wanted to read for ages, so decided to chuck it in with a laybuy I was putting on at Big W.  I really wanted the edition with the prettier cover, but I saw my chance to own it and took it.

The Mystery of the Clockwork Sparrow by Katherine Woodfine

A middle grade historical mystery that came out slightly after the first book in the Wells & Wong series by Robin Stevens.  I finally scored this one as a birthday gift, but haven’t got to it yet.

A middle grade yokai story.  I stumbled across the first three books in this series at the Library cast-off book shop and picked them up because I just couldn’t walk past any book featuring Japanese ghosties.  I’ve been desperately wanting to have at this series, so I’m making the time in 2017. Hopefully I’ll finish the three books I’ve got, not just this first one.

A middle grade mystery featuring smugglers!  I first put this on pre-order back in mid 2014, when it was originally released.  I put the pre-order on the paperback, which was releasing in the middle of 2015.  I figured I could wait that long.  Then the release date got pushed out to September of 2015.  I was tetchy, but accepted this.  THEN the release date got pushed out to September 2016!  Needless to say, I was cheesed.  It finally arrived last month, so since I’ve been waiting on it so long, it’s going in the challenge.  It has since won some awards though, so it should be worth the wait.

Home to Mother by Doris Pilkington

This is the children’s edition of the story of Australia’s Stolen Generations, immortalised in the book and film Rabbit-Proof Fence.  I spotted this one in an op-shop last week and snapped it up.

This is the second book in the Jackaby fantasy mystery series.  I pre-ordered this one a while back, since I enjoyed the first book.  My anticipation has waned somewhat during the wait (and I think the third book is out now too), but if I don’t add this one to the challenge, it may continue to be overlooked.

Wayside School is Falling Down by Louis Sachar

I’ve heard so many wonderful things about Sideways Stories from Wayside School from so many different bloggers that when I saw this one at the Library cast-off bookshop I snapped it up.  Louis Sachar is always a fun read, so I don’t think I can go too far wrong here.

The League of Beastly Dreadfuls by Holly Grant

I bought this one from the BD when I was in need of some bookish retail therapy.  Just haven’t got around to it yet.

Book Uncle and Me by Uma Krishnaswami

I had seen this little early middle grade title on a couple of “recommended” lists and then it popped up at Booktopia for two bucks or some other ridiculously cheap price so I had to have it.  I initially thought this was set in Japan, but on closer inspection, it’s actually India.  Not sure how I made that error, given the author’s obviously Indian (and super awesome!) surname.

The Bromeliad by Terry Pratchet

This is the omnibus edition made up of Truckers, Diggers and Wings.  I have read Terry Pratchet’s Discworld books before but never loved his work, but when I heard about this trilogy (maybe from SteJ at Book to the Future?) I thought I might investigate.  After reading a preview of the first chapter and finding myself guffawing after the first page, I decided I had to have it.

Henry and the Guardians of the Lost by Jenny Nimmo

We shelf denizens looooove Jenny Nimmo.  It started many years ago with the Snow Spider Trilogy, when we were fascinated by all things Welsh, and we have devoured a good section of her back catalogue since.  This one is a late 2016 release, so we grabbed it from the BD in one of those “retail therapy” moments.

The Fourteenth Summer of Angus Jack by Jen Storer

This is an Aussie middle grade fantasy/mythology tome that I had had my eye on since its release.  It came up in the bargain section of Booktopia ages ago and I grabbed it.  Having re-read the blurb, I noticed it’s by the same author as Tensy Farlow and the Home for Mislaid Children which I found a bit tropey and pedestrian, but hopefully this one will be more up my street.

So there you have it!  My goals for TBR tackling for 2017.  A couple of these books are quite short, so I may be able to sneak in a few extras – I’ve got plenty to choose from! – but we’ll see how we go.

Are you participating in this challenge this year, or are you thinking about it for next year?  Have you read any of the books that I want to attempt?  Let me know!