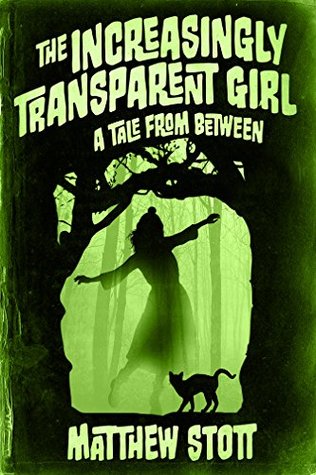 There’s no greater joy, when reading a series, to find that subsequent books are just as good as the earlier ones.  So it is with indie author Matthew Stott’s middle grade fantasy series Tales from Between.  I stumbled upon this series at the Kindle store a few weeks back and was so enamoured of the first book in the series that I bought the next two, and so far none have disappointed me.  One of the great things about this series is that even though the books take place in the same fantasy world, each story stands on its own and so you can pick up any book and start where you like.  Here’s the blurb for the third book in the series, The Increasingly Transparent Girl, from Goodreads:

Things live between awake and asleep. In the moment after your eyes grow too heavy to stay open, but before the dreams take you.

One day, Melody May begins to disappear from view. Her hands, her knees, her face, her everything. A monster’s enchantment has ensnared her, and now Melody must travel across a strange and dangerous land between awake and asleep to reclaim herself; otherwise, in 48 short hours, she will never have existed at all…

The overall tone and events of this book more closely matched the lighter, more fantasy based adventures of A Monstrous Place, the first of the series, once again moving away from the darker, more psychological adventures of the second book, The Identical Boy.   Melody May’s story takes place mostly in Between, as she ventures forth on a quest to steal back her visible body from a creepy, reclusive, mountain-dwelling entity known as The Whistler.  Accompanying Meloday on her journey (ha! I’ve only just now noticed that the protagonist’s name, Melody, relates closely to the main manipulative mechanism of the monster – whistling!) is a helpful cat that appears beside her in Between and we are even treated to a return appearance from Mr Adams and Neil from the first story, who now dwell in Between seeking out adventure and generally putting down monstrous calamity.

The Increasingly Transparent Girl is very much a “journeying” story, a familiar trope in middle grade fantasy, with the whole plot based around Melody’s quest to reach the Whistler’s mountain and return home in one piece.  This gives first time readers a good chance to see a bit of Between, and returning readers the opportunity to meet some creative new inhabitants of the place – I loved the concept of Time Bats and was happy to see a repeat performance from the Tall Man, who is Lord of Between.

I am totally convinced by the quality of this series and can’t wait to see what the author comes up with next.  The best bit about these books is that none has been similar in plot to the previous ones, and so even though the world is the same there are new and intriguing elements to uncover in each book and each story feels fresh and different.  While I wait for the next release, I took the liberty of buying two of the author’s stories for adults – Sixty-Six and Apocalypse Hill – and can’t wait to see what scares this inventive author has cooked up for older readers.

3 thoughts on “Third Time’s A Charm: The Increasingly Transparent Girl (Tales from Between #3)”