Well it’s only been a few days since I borrowed a stack of graphic novels from the library, but I’ve already chewed through a couple of them and it’s time to focus in on Ben Hatke’s Zita the Spacegirl series.  Here’s the blurb from Goodreads:

Zita’s life took a cosmic left turn in the blink of an eye.

When her best friend is abducted by an alien doomsday cult, Zita leaps to the rescue and finds herself a stranger on a strange planet. Humanoid chickens and neurotic robots are shocking enough as new experiences go, but Zita is even more surprised to find herself taking on the role of intergalactic hero. Before long, aliens in all shapes and sizes don’t even phase her. Neither do ancient prophecies, doomed planets, or even a friendly con man who takes a mysterious interest in Zita’s quest.

Zita the Spacegirl is a fun, captivating tale of friendship and redemption from Flight veteran Ben Hatke. It also has more whimsical, eye-catching, Miyazaki-esque monsters than you can shake a stick at.

Middle grade and above

Cartoonish and chock full of heart

I knocked this one over in about twenty minutes.

Before I get into this book too much, I should point out that we Shelf-dwellers just love Ben Hatke.  It started with Nobody Likes A Goblin and now we are on a mission to acquire and read all of his work.  We already had Return of Zita the Spacegirl on our TBR shelf, but it was suggested that we read the first in the series before trying that one, so we were lucky enough to find this at our local library.

Plot wise, Zita and her friend Joseph are transported to another world after giving in to temptation and pushing a big red button that fell out of the sky.  The two are immediately separated and it is up to Zita to find Joseph and see them safely home, before the planet they are on is destroyed by a fiery meteor – nothing like a bit of time pressure to spice things up!.  Along the way, Zita meets some friendly and not-so-friendly folk and eventually has to make a decision about whether or not she is ready to return home.

The strength of this tale is in the characters.  From Zita herself to each and every character of whom we are given just a glimpse in the background frames, Hatke brings this story to life with all manner of weird and wonderful folk.  There’s Strong-Strong, a big, brown Domo-kun-like character with a heart of gold, Pizzicato, a mouse with some gnarly armour, and a vengeful and righteous killer robot named One, to name just a few.  Hatke has an incredible knack for drawing characters to which the reader can be sympathetic, even if they’re reasonably villainous.  They’ve inspired Mad Martha to create them in crochet before and as we were paging through Zita’s story, it was obvious that Mad Martha was ticking off on her fabric fingers which characters she would like to make next.

The story is more complicated than the basic rescue-a-friend, save-the-world plot type, with difficult decisions being thrown up along the way.  Zita also has to think on her feet and go with her gut about who to trust and who to avoid if she is to find her way home safely.  There are some delightfully creative inclusions here and there, my favourite of which is Door Paste – like a tube of toothpaste, but it creates a a door if you smear it on a flat surface.  Perfect for quick escapes!

Hatke has done it again with Zita’s adventures.  If you are (or know of) a fan of science fiction, delightful artwork, exciting adventures, themes of friendship and loyalty and strong female protagonists, you must get your claws on Zita the Spacegirl.

And now here’s Return of Zita the Spacegirl, which is book three in the series.  Here’s the blurb from Goodreads:

Zita the Spacegirl has saved planets, battled monsters, and wrestled with interplanetary fame. But she faces her biggest challenge yet in the third and final installment of the Zita adventures. Wrongfully imprisoned on a penitentiary planet, Zita has to plot the galaxy’s greatest jailbreak before the evil prison warden can execute his plan of interstellar domination! 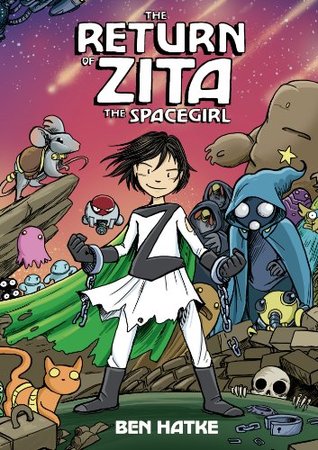 Middle grade and above

Cartoonish and chock full of heart

As above, this was about twenty minutes uninterrupted reading

You may have picked up that I skipped book two in the series, Legends of Zita the Spacegirl, because the library didn’t have it (boo!).  This wasn’t too much of a drama because the opening scenes cleverly work some of the key points from books one and two into the dialogue between Zita and her captor.  Yes, this book begins with Zita imprisoned and seemingly helpless, although it is apparent that in book two she had been gadding about making a name for herself across the galaxy and fostering the reputation of someone not to be trifled with.

The plot focuses on Zita’s attempts to escape her prison by finding a jump crystal with which she can power up the red-button thingy and take herself back home.  Along the way she is helped out by a mysterious masked boy and her cellmates, a skeleton named Femur who possesses some very interestingly shaped digits, and Ragpile, an animated pile of rags.  I absolutely loved the little twist at the end concerning Ragpile and Femur and it encapsulates the ingenuity and humour that is woven into these stories.  Old friends also make an appearance, including Pizzicato, Strong-Strong and One, as well as some folk from the second book who I hadn’t met before, most interesting of which being a space-pirate type lady and her mysterious cat.

Zita’s adventures eventually find her back on Earth and even though it is claimed that this is the final story in the series, the ending holds a little hope that there might be more.

This was an action packed way to finish the series, full of escapes, ingenious ideas and teamwork.  Themes of betrayal and forgiveness loom large and the ensemble cast of characters ensures that there’ll be something for everyone in Zita’s final adventure.

Also, I can’t find a space to fit them on the blog, but I have also read and reviewed Livingstone Volume 1 and Bloody Chester from my stack of borrowed graphic novels.  Click on the book titles to see my reviews on Goodreads.

4 thoughts on “Gabbing About Graphic Novels: Zita the Spacegirl…”