Optimists Die First by Susin Nielsen combines craft, social anxiety and art therapy in a light-hearted tale of love overcoming fear.  We received a copy from the publisher via Netgalley and here’s the blurb from GoodreadsGoodreads:

Life ahead: Proceed with caution.

Sixteen-year-old Petula De Wilde is anything but wild. A family tragedy has made her shut herself off from the world. Once a crafting fiend with a happy life, Petula now sees danger in everything, from airplanes to ground beef.

The worst part of her week is her comically lame mandatory art therapy class. She has nothing in common with this small band of teenage misfits, except that they all carry their own burden of guilt.

When Jacob joins their ranks, he seems so normal and confident. Petula wants nothing to do with him, or his prosthetic arm. But when they’re forced to collaborate on a unique school project, she slowly opens up, and he inspires her to face her fears.

Until a hidden truth threatens to derail everything. 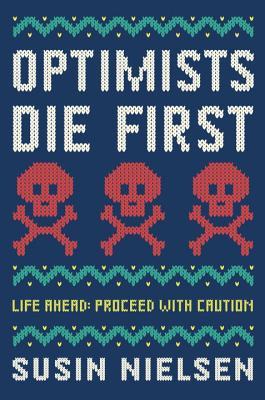 Having read and enjoyed Nielsen’s work before, I had a pretty good idea what I was in for going into this and I wasn’t disappointed.  Much like in Word Nerd, Nielsen combines a quirky hobby with a serious social issue – in this case, young people’s mental health – and manages to successfully blend seriousness and humour.

Petula is still grieving the loss of her younger sister and has developed a major generalised anxiety disorder partly from the guilt she feels about her possible role in her sister’s death. New boy in therapy group, Jacob, seems to take his prosthetic arm in stride and although he is secretive about the reasons he is in therapy group in the first place, is able to bring the group together in a way they haven’t managed before.  As the two become better friends, it will be the issue of guilt – perceived and actual – that may drive the two apart even as it brings them together.

Even though there is a bit of romance in this one, I still quite enjoyed Petula and Jacob’s road to friendship and the connections they make with the others in their therapy group.  There are a few twee bits here and there – particularly the ridiculous activities suggested by the leader of the art therapy group – but overall the book shows the growth of the characters and the group in a realistic (if simplistic) way.

I particularly enjoyed the blink-and-you’ll-miss-it cameo from Cosmo, a character in one of Nielsen’s other books.  Despite the fact that the ending is pretty predictable from the outset, I liked spending time with these characters and I appreciate the way that Nielsen manages to address difficult issues without ever losing the ability to inject humour into the situation.

I’m also submitting this one for the Popsugar Reading Challenge 2017 in the category of a book by or about someone with a disability.  You can check out my progress toward this year’s challenges here.

2 thoughts on “YAhoo! It’s a YA Review: Optimists Die First…”

Inside My Worlds
Tundra Books