Well, last time I was complaining that Monday had come around too fast.  This time, it’s come so quickly that it’s got to Thursday before I can put up Monday’s post.  Sorry about the delay this week, but the week was busy, then when I sat down to blog I realised the keyboard had decided to retire without telling me, so I had to track down a new, more enthusiastic keyboard that was willing to work with no pay and under the constant threat of tea spillage and here we are, it’s Thursday.

Today’s book is the opener of a new cosy mystery series set in the Yorkshire Dales and although it has a punny title, I really enjoyed it.  We received our copy of Date With Death (Book 1 in the Dales Detective Series) by Julia Chapman from PanMacmillan Australia for review and here’s the blurb from Goodreads:

Samson O’Brien has been dismissed from the police force, and returns to his home town of Bruncliffe in the Yorkshire Dales to set up a detective agency while he fights to clear his name. The people of Bruncliffe, however, aren’t that welcoming to a man they perceive as trouble – and he is greeted by his old friend, Delilah Metcalfe, not with an hug but a right hook that sends him sprawling.

Delilah, meanwhile, is besieged by financial concerns and struggling to keep her business, the Dales Detective Agency, afloat – all while trying to control her wayward Weimaraner dog Tolpuddle. Then when Samson gets his first case, investigating the supposed suicide of a local man, things take an unexpected turn, and soon he is discovering a trail of deaths that lead back to the door of Delilah’s agency. With suspicion hanging over someone they both care for, the two feuding neighbours soon realise that they need to work together to solve the mystery of the dating deaths – and working together is easier said than done. 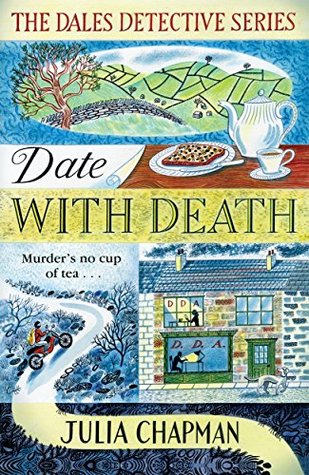 Delilah is in deep debt and struggling to hang on financially until her dating agency business gets off the ground. When Samson O’Brien returns to the Dales in disgrace, Delilah’s only financial option is to let him rent out her ground floor office for his new detective agency…a timely move indeed because it seems someone in their community is picking off members of Delilah’s agency one by one.

This is a bit of a tricky one because there isn’t anyone in the village (or beyond) who particularly stands out as someone who would happily be serial killing members of a dating agency.  As the story moves along, instead of actual people as suspects our protagonists try to build up a mental picture of who such a person might be.

This is quite a refreshing aspect of the book because in your usual murder mystery you at least have a few suspects to work with.  It takes a little while to prove that the deaths are indeed murder, and then the hunt involves some rather tricky and dangerous tactics.  As well as attending the odd speed dating night out.

Despite the fact that this is definitely a cosy and there is a lot of time spent on developing the characters, both main and secondary, I thoroughly enjoyed this one and would certainly be interested in following the series.  Delilah is the only girl in a family of manly men and is determined to make her business successful after a recent divorce.  Samson is the black sheep of the village, having left his alcoholic father in dire circumstances (in the opinion of the town) to swan off to London and bag a high paying and dangerous job with the Met.  When Samson returns home, his welcome is not particularly warm and he discovers that many things have changed drastically since he’s been away.  Samson’s return coincides with a little problem at work which he wants to keep hidden from the villagers at all cost.

I quite enjoyed the premise of the murdered folk all being from the same dating agency (although I’m sure this has been done before in some way, shape or form in other cosies) as well as the way in which Delilah and Samson (eventually) go about sorting it out.  It seems rather far-fetched that no one would bother to inform the police about their suspicions, but it works for the story and makes the eventual hunt far more suspenseful, knowing that Delilah and Samson are on their own.

As one who likes my mysteries twisty and my murders happening in quick succession, I did find the long sections developing characters, backstory and village life a little distracting, but I accept that this is obviously one of those series where the relationships between the characters and their relationship with their environment is of utmost importance.  The book also sets a bit of groundwork for other books in the series.  There are definitely some shady characters getting around Bruncliffe that will no doubt play a part in nefarious doings further down the track.

There’s a lot going on here that will satisfy those looking for both an exciting mystery and a story about coming home and reinventing oneself.  I must give a shout-out to the collective folk of the retirement village, of which Samson’s father is part, for lifting the mood whenever they appeared.  I’m glad to see that they will feature heavily in the next book in the series.  I would certainly recommend giving this one a go as your next holiday read, or, if you happen to live in the Southern Hemisphere, it’s the perfect book to snuggle up under a blanket with on a rainy, lazy weekend…for whenever the humidity decides to bugger off for good.

I will be submitting this book for the Popsugar Challenge under the category of “author using a pseudonym” because Julia Chapman is the pen name of Julia Stagg. You can check out my challenge progress here.