Aaaaand next up in my climb up the Mount TBR Reading Challenge for 2017 is book two in Cristy Burne’s Takeshita Demons series, The Filth Licker.  I finished the first book of the series back in February and since I’m being crushed under the weight of my review pile at the moment, I really needed a quick read to keep up the momentum for this challenge.  Here’s the blurb from Goodreads:

Miku is going to School Camp in the forest, with her friend Cait and the rest of her class. It should be fun. But Miku has premonitions of danger, and when Oscar goes down with a festering rash, and a rushing wind blows out the bonfire she’s sure something bad is going on. Then Alex finds the frog-like Filth-Licker in the boys’ toilets, and all at once Miku, Cait and Alex are on a secret mission to overcome the vengeful Shape-Shifters or Super Demons before it’s too late…

Later that night, with Alex kidnapped by a pyromaniac fox, and Cait possessed by some angry sickle weasels, it’s up to Miku and the Filth-Licker to save them all from disaster. 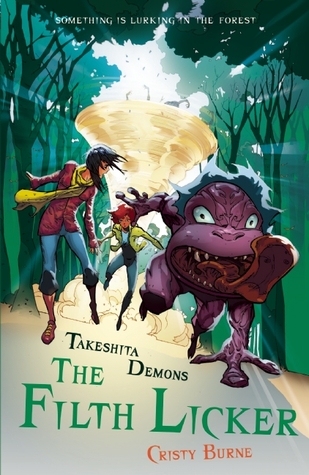 Ten Second Synopsis:
Miku, Clair and their class are going on school camp – but Clair seems absentminded, to say the least, and before the class even gets to the camp one of Miku’s classmates has been preyed upon by a Yokai. When the camp leader suggests telling ghost stories around the fire, Miku knows that they are risking the Hyaku Monogatari – an ancient ritual that creates a super-demon.

I picked up the first three in this series from the Library Cast-offs bookshop at Nundah, because they featured Yokai and I hadn’t heard of them before.

A misguided belief that I would have to read all three in the series one after the other.

I’m still glad I bought all three at once, because otherwise I would be umming and ahhing about whether to get the third one since I didn’t enjoy this one as much as the first.

To the permanent shelf.  One more to go in the series!

I feel like I’ve lost a bit of momentum this month with my TBR challenge.  I have a massive stack of books that I have to get through for April and the stack seems to be getting higher rather than lower unfortunately.  I’m going to aim to knock over Greenglass House next month.  Even though it’s quite a thick book I’ve been waiting literally years to read it, so I’ve made the decision that it is time to get to it.

Check out my progress toward the Mount TBR Reading Challenge for 2017 here.

One thought on “TBR Friday: The Filth Licker”