David Almond is one of those authors that many people categorise as an “auto-read”; that is, such is the strength of his previous work, any new work that is published will be snapped up immediately by his fans.  It’s a bit that way for we shelf-dwellers.  We loved Skelling, A Monster Calls and Heaven Eyes, for instance, but found some of his other books like Clay and The Savage a bit too dark and depressing.  The Tale of Angelino Brown which we received from Walker Books Australia for review, felt like something new from Almond.  The magical realism and quirkiness were all still there, but oozing out of the pages was a sense of hope and a lightness in tone that we hadn’t encountered in Almond’s work before.  Before I say too much more, here’s the blurb from Walker UK:

A warm and witty tale from a master storyteller, author of Carnegie Medal-winning Skellig and internationally bestseller The Boy Who Swam with Piranhas

Bert and Betty Brown have got themselves a little angel. Bert found him in his top pocket when he was driving his bus. Bert and Betty’s friends think he’s lovely. So do Nancy and Jack and Alice from Class 5K. What a wonder! But Acting Head Teacher Mrs Mole is not so sure. Nor is Professor Smellie. Or the mysterious bloke in black who claims to be a School Inspector. Then there’s Basher Malone – big, lumbering Basher Malone. He REALLY doesn’t like Angelino. And it looks like he’s out to get him… 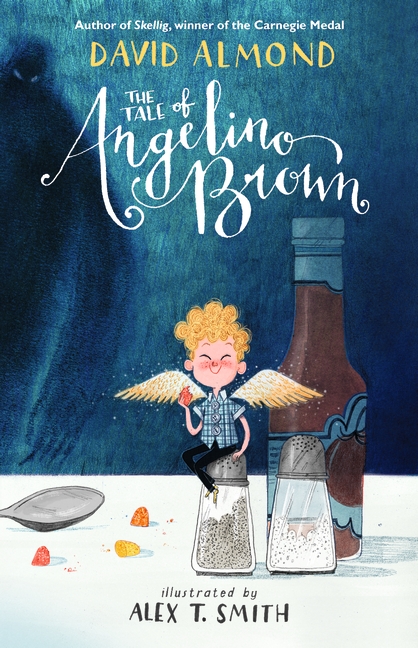 There’s a real sense of joy that comes flitting through the text and images of this tome, from the opening lines of “Here we go. All aboard”, to the rosy-cheeked, golden-haired, flatulent angel of the cover.  This book felt quite uplifting to read throughout, which is not always the case with Almond’s work, and I couldn’t help but feel that this book would be a hit with both its intended young audience, and older readers who dared to venture into books for young readers.  The tone is generally light and humorous, without ever losing Almond’s signature sense of pathos directed toward certain of the more pitiable characters in the story.

The book opens on Bert Brown’s pondering about the deficiencies of the bus driving trade, when all of a sudden, Bert’s life is turned on its head by the discovery of an angel – a living, breathing, if somewhat flatulent and undersized angel!  The grumpy Bert brings the angel home to his wife Betty and the pair immediately become enamoured of the little creature and name him Angelino.  As the story moves on, Angelino becomes a treasured being among the children at the school at which Betty works as a lunch lady and with each passing connection, Angelino grows larger.  All is not well however, as unscrupulous and just plain unwise forces find out about Angelino and set into motion a plan to kidnap him for reasons nefarious.

This really is a delightful read, with lots of giggles to be had and a real sense of warmth about the quirky characters.  Almond has a way of making even the most odious of personalities at least pitiable, if not likeable, and there is much of that going on here with everyone from Kevin the Master of Disguise, to Mrs Mole the acting Headteacher and the truly monstrous Basher Malone.  Bert and Betty are the epitome of lovable however and felt like the true heart and soul of the book to me.

Themes of friendship, forgiveness and the forging of community can be found at various junctures of the story and Angelino, while never the most loquacious of characters, serves as a central focus around which unconnected characters come together.  The illustrations enhance the reading experience and wrap neatly around sections of text, giving extra life to the imagery generated by the writing.

I thoroughly recommend The Tale of Angelino Brown to current fans of Almond’s work as well as those who have never come across his work before.  I could see this being the perfect read aloud for a lower middle grade classroom, both for its humour and its gentle message of rallying around the vulnerable.

I’m going to submit this one for the Popsugar Reading Challenge, under category #47: a book with an eccentric character, because eccentricities abound in this one.  You can check out my progress toward my reading challenges here.