Today’s graphic novel is a ode to the humble park bench from Christophe Chaboute.  We received The Park Bench from Allen & Unwin for review and here’s the blurb from Goodreads:

Chabouté’s enchanting story of a park bench was first published to critical acclaim in France in 2012. Faber now brings his work to the English-speaking world for the first time.

Through Chabouté’s elegant graphic style, we watch people pass, stop, meet, return, wait and play out the strange and funny choreography of life. Fans of The Fox and the Star, The Man Who Planted Trees and Richard Linklater’s Boyhood will find this intimate graphic novel about a simple park bench – and the people who walk by or linger – poignant, life-affirming and brilliantly original. 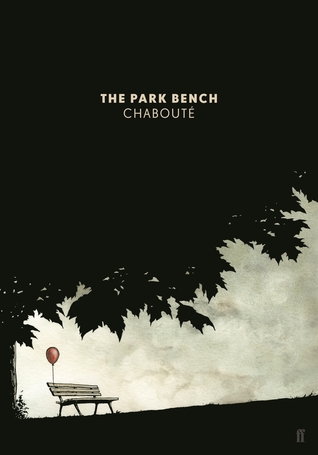 About twenty minutes in one sitting

The Park Bench is a longitudinal look at the life and times of a simple park bench, as seen through the eyes of those who use it.

One might not expect a great deal of feels, as the young people say, to arise in a wordless story about an inanimate object, yet The Park Bench is chock full of poignancy and moments that are quietly heartbreaking. The book follows various folk as they interact (or not) with a simple park bench, from the young sweethearts who carve a memorial to their love into the bench, to the elderly couple who routinely use the bench to share a baked snack, to the homeless man who just wants to have a kip without being moved on by a recurrent policeman. Some characters seem to be bit players, with a very small story arc – such as the businessman who trudges past the bench on his way to and from work and the jogger who uses the bench as part of his fitness routine – while other characters’ stories unfold throughout the tale. The story of the homeless man is, I think, the most developed of the bunch and the ending to that story is both satisfying and somewhat irritating, although it does prompt reflection on the various uses to which one can put their life and the vagaries of changing allegiances.

This is a right old doorstop of a book, yet it took me a very short time to get through it, given its graphic novel format. I suspect it’s one that is meant to be flicked through again and again, to allow details that were missed the first time to come to the surface.

The ending of the park bench’s story is quite bittersweet and filled with the same sort of quiet rebellion and “coming full circle” that colour the stories of many of the characters with whom the park bench has a relationship.

I enjoyed this one, but the sparsity of text and the need to look carefully at panels that alternate between mostly blank and filled with action may not be to everyone’s tastes.