It’s okay people, you can stop the phone calls to the Missing Persons (Creatures?) Department – I’m back! My recent absence (that you all noticed and pined over) was due to some difficulties with our interwebs connection. The fleshfolk who dwell here have finally sorted it out and I’m ready for a posting frenzy, beginning with Obstacle Number … something or other … in the What’s In a Name Reading Challenge: Surface Tension by Meg McKinlay! 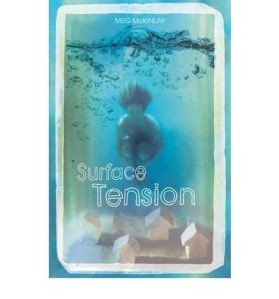 Taken from the: Non-Christie Listie (as a last-minute ring in )

Category: One – A book with Up or Down or its equivalent in the title.

“But Bruce!” I hear you interject, “That title doesn’t bear any relation to up or down or its equivalent!”

Ah yes. On the surface (pun intended), it would appear that this book has no up or down connection….but delve a little deeper (pun intended) and you will note that this tome has been recently re-released under the title….BELOW! Take that, category one!

Surface Tension (or Below) follows the story of Cassie – a young lass who was born on the day her family’s town was drowned.  Since Lower Grange was flooded after the creation of a dam in the area, Cassie, her friend Liam, and all the other residents have resumed their lives in the higher and drier New Lower Grange.  During summer holidays, Cassie and Liam take to swimming in the not-commonly-frequented side of the lake above Lower Grange and stumble upon a secret hidden away with the fish and lake-weed in the old town.

This Book’s Point of Difference:

McKinlay has created a refreshing take on the sense of mystery and adventure evoked by the image of a city hidden beneath the water – it’s a great premise and a nice change from the usual middle grade/YA fare around at the moment.

– The secret discovered by the kids is kept nicely hidden through the use of a few well placed red-herrings. It was a surprise for me – which was great, because two-thirds of the way through I thought (rather disappointedly) I’d figured it out. I hadn’t.

– I can’t really think of any. It was certainly the book I’ve most enjoyed out of the last ten or so I’ve picked up.

This is a really well constructed little read and delivers just what you’re looking for if you’re after something light but a little bit different from the standard fantasy or friendship fare.

Ahhhh. It’s good to be back. Stay tuned for more Reader’s Challenge fare shortly, as well as a frustration-related Haiku and dates and themes for subsequent Fiction in 50s.