If you are the kind of person who likes to laugh at bum jokes, double entendres and words that sound silly when you say them, then consider today a red-letter day.  Mount Buggery to Nowhere Else: The Story Behind Australia’s Weird and Wonderful Place Names by Eamon Evans, and kindly provided to us for review by Hachette Australia, is chockers with ridiculously named localities.  Even better than that is the thought that people actually have to live in these places, write these ridiculous names on official forms and adopt a sudden whisper when innocently asked, “So where are you from?”

Before I go much further, let’s see the blurb from Goodreads:

The stories behind Australia’s many, many strange, inappropriate and downright hilarious place names.

From Dismal Swamp to Useless Loop, Intercourse Island to Dead Mans Gully, Mount Buggery to Nowhere Else, Australia has some of the strangest, funniest, weirdest and most out-of-place names going – now described and explained in one humorous and fascinating book.

Australia’s vast spaces and irreverent, larrikin history have given us some of the best place names in the world. Ranging from the less than positive (Linger and Die Hill, NSW), to the indelicate (Scented Knob, WA), the idiotic (Eggs and Bacon Bay, TAS) to the inappropriate and the just plain fascinating, Mount Buggery To Nowhere Else is a toponymical journey through this nation of weird and wonderful places.

And here are Five Things I’ve Learned From Mount Buggery to Nowhere Else by Eamon Evans:

1. If you can think of a phrase containing juvenile sexual innuendo, chances are somewhere in Australia bears its name

2. Accomplished sailor he may have been, but possessed of an imagination, wherein the naming of landmarks is concerned, Captain Cook was not.

3.   Except for one instance in which the English name-bestower chose to commemorate having had a pleasant chat with Australia’s original inhabitants, not only were Australia’s indigenous people subjected to displacement and continual violence, they also had to suffer the indignity of such violence being commemorated in various place names. (Poisoned Waterhole Creek, I’m looking at you)

4. A remarkable number of places in this great land have been named for lost or deceased livestock.

5. Whether referring to door handles or hilly outcrops, one can’t help but giggle at the word “knob”.

Who would have thought Australia would have so many silly and surprising place names that a book could be written on the topic?  Well, everyone, actually.  It’s pretty common knowledge, I should think, that our great southern land is peppered with various knobs, titties and dancing dicks. Actually, I’m pretty sure there’s only one of the latter.  But if you thought that the only silliness in Australian place names involved jokes about body parts, then you will be pleased to know that imbecilic naming styles stretch far beyond such base, juvenile humour.

Take Bogan Gate in New South Wales, for instance.  If you are from the northern hemisphere, and have no idea why this name is funny, Google has this definition to enlighten you:

And to help you out further, here is a picture of one:

And by God, don’t we all wish we had a gate to keep her out.

Then there’s Little Donkey Woman Swamp and Tom Ugly’s Point, both of which, I hope, aren’t just false advertising.  I also wonder whether the residents of Beardy Plains, and the associated Beardy Hill and Beardy River have considered making some cash off the back of the hipster trend.  My absolute favourite though, has to be Linger and Die Hill in New South Wales.  It’s just such an evocative name.  And at least, if the worst happens, the locals can always say, “Well don’t say we didn’t warn you!”

The book is divided into chapters based around each state and territory, with place names listed in alphabetical order.  I read the book from front to back, which, by the end, became a bit of a struggle, so I would suggest flicking back and forth as takes your fancy, or to hone in on one state or territory at a time.  Similarly, there are a bunch of places with ordinary sounding names like Macquarie and Churchill, and in many cases, the stories behind their naming are equally unexciting.

For some of the place names, the origin of the name is unknown or has little, if anything, to do with the way the name sounds which can be a tad disappointing.  While it was quite interesting to know that Beauty Point is actually named after a cow named Beauty, and not the stunning natural features of the area, it was less fascinating to know that Smellie Inlet is just named after a bloke whose surname was Smellie.

A couple of the stories seem downright dubious, to be honest.  The naming of Adavale to commemorate the fact that a lady named Ada once lost her veil nearby reeks of the old bull’s leavings for instance.

Overall though, this is a fun, sometimes shocking, sometimes disheartening but mostly quite amusing foray into Australian place names as well as Australian history.

Here’s a quick test though, to see if you are the right type of reader for this book.

Did you laugh at any of the above?

Then this book is for you.

Excuse me while I go giggle into my cup of tea over Mount Meharry.

It’s time for some picture book love today and we were lucky enough to receive a little gem from Allen & Unwin (thanks!) that is informative, entertaining and a brilliant conversation starter for the sports fans among you.  Boomerang and Bat: The Story of the Real First Eleven by Mark Greenwood and illustrated by Terry Denton, tells the story of the first Australian cricket team – made up entirely of Indigenous men – to tour England.  Here’s the blurb from Goodreads:

The first Australian cricket team to tour England was a group of Aboriginal stockmen. This is their story. In 1868 a determined team of Aboriginal cricketers set off on a journey across the world to take on England’s best. Led by star all-rounder Johnny Mullagh, and wearing caps embroidered with a boomerang and a bat, they delighted crowds with their exceptional skill. From the creators of Jandamarra, this is the remarkable story of the real first 11. 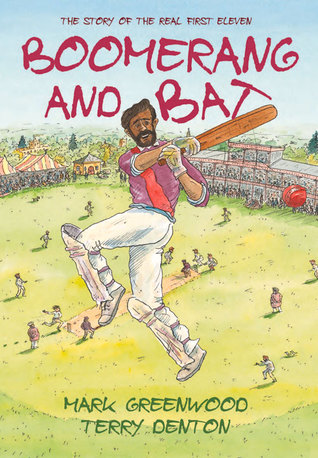 If you’re looking for a cracking (sorry, couldn’t resist the pun) narrative non-fiction picture book for the reluctant, sports-mad, mini-fleshing in your life, you should certainly get a hold of Boomerang and Bat.  Pitched at the middle to upper primary age range, the book takes an engaging look at the first Australian cricket team to tour England.  I found the story fascinating as an adult reader, with plenty of questions springing to my mind – not least of which, why is this event not more widely acknowledged and why are Indigenous people nowadays conspicuous only by their absence from our national cricket teams? – and I’m sure young cricket fans will get a kick out of seeing cricket “in the olden days”.  (No Rocket Man at these matches!)

The story has an incredibly subtle undertone that depicts aspects of life for indigenous people of the time.  While the team is received well as cricketers, there is still an undercurrent of “look at the performing natives” that is conveyed through the text and imagery.  I can imagine the book being used to excellent effect in the classroom to stimulate discussion around the social issues of the time – how would the men have felt, being lauded for their sporting skills, but not counted as citizens?  Did circumstances change for the men when they returned to Australia?  Did the men feel the trip was worthwhile, considering the death of one of their teammates?

The presentation of the book is gorgeous, with Terry Denton’s illustrations bringing the text to life.  The beautiful map that adorns the front endpapers is matched by the final endpapers depicting images of each of the team members, with their names, nicknames and a piece of information about their role in the team.  It’s hard to imagine Terry Denton as a separate entity from the Griffiths/Denton Juggernaut, but it’s wonderful to appreciate a more realistic illustrative style in this tome.

I will admit to enjoying this book enormously as an adult reader and being drawn in to the mystery of this event being lost in the annals of time.  I’m interested in finding out more – did these men have descendants?  If so, what do they think of their great-grandfathers’ sporting achievements? Could their perspectives have been included in this book somehow?

I think the mark of a good non-fiction book is to stimulate further curiosity about the topic. Boomerang and Bat has certainly achieved this for me as an adult reader and I can see it doing the same for mini-fleshlings.  Teachers in particular, get your grabby hands on this one and get it into your classrooms: stimulating discussion will be guaranteed!