Even though it’s winter where I am, you could easily be forgiven for thinking that its summer and for that reason alone I have joined in with the Beach Reads Giveaway Hop hosted by StuckinBooks and running from June 3rd to 15th.

Since the theme of the hop is beach reads, relaxing reads, reads to take on holiday….

I am offering one winner their choice of title from the Choose Your Own Adventure series available from the Book Depository!

Here’s the deal:  One winner will get to choose a book they would like from this list of available Choose Your Own Adventure books at the Book Depository.  The giveaway is open internationally, provided the Book Depository ships to your country for free.  Other Ts & Cs are in the Rafflecopter.

Don’t forget to check out the other participating blogs here:

I would suggest grabbing a juicy, juicy snack for today’s Double-Dip review because we have two YA novels oozing juicy, juicy gossip.  Everyone knows I never repeat gossip.  So listen carefully as we dive on in!

First up, we have Nerve by Jeanne Ryan, kindly provided to us for review by Simon & Schuster Australia.  Here’s the blurb from Goodreads:

When Vee is picked to be a player in NERVE, an anonymous game of dares broadcast live online, she discovers that the gameknows her. They tempt her with prizes taken from her ThisIsMe page and team her up with the perfect boy, sizzling-hot Ian. At first it’s exhilarating–Vee and Ian’s fans cheer them on to riskier dares with higher stakes. But the game takes a twisted turn when they’re directed to a secret location with five other players for the Grand Prize round. Suddenly they’re playing all or nothing, with their lives on the line. Just how far will Vee go before she loses NERVE.

…a reasonably unbelievable, but fun and fast-paced story for those times you need to take a break from adulting (or young-adulting).  Despite having very little in the way of character development and some plot twists that seem dubious at best, there was still something about this book that kept me hanging in there.  I don’t think this one will be claiming any prizes for sophisticated writing, but I still enjoyed the sheer unlikeliness of some of the events – simply because they were unlikely, and therefore unpredictable.  The ending ramps up the action and danger considerably and ended up being my favourite part in a bizarre, action movie type of way.

…you enjoy books that feature characters with coherent back stories, and at least a basic explanation for why certain things are happening.  There are gaping holes here for almost every character, so it’s hard to really connect with any of them on more than a superficial level.  Vee, for instance, has obviously had a recent mental health issue (or is it?) that caused her to be hospitalised, and as a result of this her parents…..ground her.  I’m not certain in what universe a parent would think grounding someone is an appropriate response to an apparent suicide attempt (or is it?) but that’s the sort of explanatory black hole to which I refer.  There isn’t a lot going on in terms of world-building either, to explain the hows and whys and who’s of Nerve (the game) and the people behind it.

If you can suspend your disbelief and your natural sense of curiosity about certain characters and their motivations (’cause you ain’t going to find out anything about ’em), this would be a great choice for a lazy beach or Saturday afternoon read.  There’s some fairly predictable romance thrown in, but overall the pace of the book is quite quick, with Vee and Ian moving from one dare to the next within the space of a few hours or days at most.  If you think you might like to give this one a crack, just be aware that it’s more action than substance.

Next up we have With Malice by Eileen Cook, which we received from Allen & Unwin for review.  Here’s the blurb from Goodreads:

When Jill wakes up in a hospital bed with her leg in a cast, the last six weeks of her life are a complete blank. All she has been told is that she was involved in a fatal accident while on a school trip in Italy and had to be jetted home to receive intensive care. Care that involves a lawyer. And a press team. Because maybe the accident…. wasn’t just an accident.

With no memory of what happened or what she did, can Jill prove her innocence? And can she really be sure that she isn’t the one to blame?

…a solid stab at the oft-used “amnesia” story-line with a quirky format to push things along and a cheeky ending that had me nodding with satisfaction at the unexpectedness of it.  I don’t know whether you’ve noticed but there do seem to be an awful lot of “person wakes up in hospital with no memory of how they got there and finds themselves accused of a crime” books getting around at the moment.  I found With Malice to be toward the top of the pile of books with this story-line that I have come across, mainly due to the formatting; rather than just a standard novel, the author has included bits of police transcripts, emails, blog posts and all sorts to drip feed new information to the reader.  The book follows a sort of “main character POV” chapter followed by alternative storytelling method” structure and I found that this really kept my interest in the story up.  The ending has a sense of inevitability about it, but a few twists in terms of motives and behaviours so that although the reader might be able to guess what happened towards the end, they probably won’t guess why it happened.  The incident also takes place in Italy, so there is a very slight sense of “abroad” about it all, which makes a nice change from the typical USA-set YA tale.

…you don’t like amnesia stories.  Although there are quirks in the format and ending, overall this reads exactly as you’d expect it to as Jill tries to get her memory back and doesn’t necessarily know what to believe.

While I don’t feel that this is the greatest amnesiac murder mystery ever written, there was enough here to keep me interested.  I particularly enjoyed the police interview transcripts and the ways that minor characters viewed the event – what particular things they noticed and how their opinions on what happened differed from each other.  I’d say that this is another good candidate for a lazy beach read, with some unexpected quirks to spice up a familiar plot-line.

Well, did you manage not to spill the beans onto your outfit?  I hope one of these juicy little numbers has taken your fancy!

My recommendation for a recent release, relaxing beach read (if I enjoyed the beach that is.  I don’t.  Too much sand in odd places.), would be Siobhan Curham’s delightful The Moonlight Dreamers.  You can see what’s so great about it by clicking on this cover image: 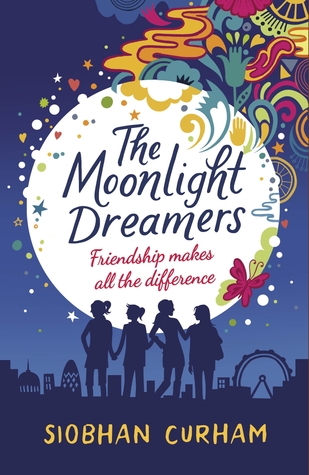 But on to the giveaway!  I am offering one winner their choice of book up to the value of $15 AUD from the Book Depository.  My giveaway is open internationally, provided the BD ships to your country for free.  Other Ts & Cs are in the Rafflecopter.

This is a hop, so don’t forget to visit the other participating blogs to see what’s up for grabs!  Click the link below to see all the participants: