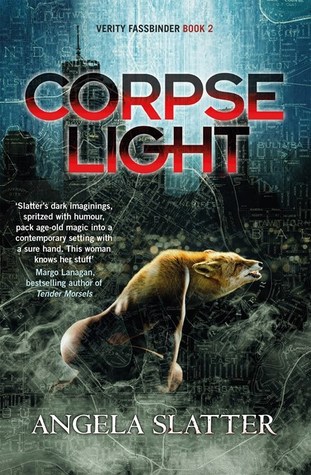 If you are as much a fan of Ben Aaronovitch’s DC Peter Grant series of paranormal police procedural novels as we are, you really should prick up your pointy, furry ears for the book we have for you today.  We received Corpselight, being the second book in Angela Slatter’s Verity Fassbinder paranormal detective series, from Hachette Australia for review and here’s the blurb from Goodreads:

Life in Brisbane is never simple for those who walk between the worlds.

Verity’s all about protecting her city, but right now that’s mostly running surveillance and handling the less exciting cases for the Weyrd Council – after all, it’s hard to chase the bad guys through the streets of Brisbane when you’re really, really pregnant.

An insurance investigation sounds pretty harmless, even if it is for ‘Unusual Happenstance’. That’s not usually a clause Normals use – it covers all-purpose hauntings, angry genii loci, ectoplasmic home invasion, demonic possession, that sort of thing – but Susan Beckett’s claimed three times in three months. Her house keeps getting inundated with mud, but she’s still insisting she doesn’t need or want help . . . until the dry-land drownings begin.

V’s first lead takes her to Chinatown, where she is confronted by kitsune assassins. But when she suddenly goes into labour, it’s clear the fox spirits are not going to be helpful . . .

Corpselight is the sequel to Vigil and the second book in the Verity Fassbinder series by award-winning author Angela Slatter.

It must be noted that Brisbane, my ancestral home and current shelfing ground, is not commonly the setting for books featuring fantasy and paranormal happenings.  In fact, the last one I read with Brisbane as a setting was Jam by Yahtzee Croshaw, four years ago.  Despite this, Slatter has had a damn good crack at trying to create a paranormal paradise in our fair city in Corpselight, with, among other creatures, a mud-slinging Scandinavian nasty and a skulk of kitsune who have no doubt taken advantage of the quick nine hour flight from their home country.

The quick-witted tone of Verity’s narration moves the plot along apace and despite the many, many references to her pregnancy in the first few chapters (including the truly remarkable revelation that at thirty-two weeks along, she sleeps soundly all night), it’s easy to get sucked in to the initial mystery on offer – the mysterious repeat appearance of stinky, coating mud inside an upmarket Paddington house.  Much like in the Peter Grant series, Verity works with various connections in the paranormal underworld as well as seemingly ordinary people who have taken advantage of Weyrd-Human relations – the ubiquitous insurance agency chief amongst them – to dig deeper and uncover the truly unexpected source of the mud-slinging.  I did find that the narration was slowed a little in the early chapters by information dumps about the events of the previous book.  These were necessary from my point of view, considering I hadn’t read the first book, but I wonder whether there might have been another way to accomplish the same task without slowing the narration – a cast of characters at the beginning, perhaps, or something similar.

I’m sure that most readers won’t have any problem at all with Brisbane as a setting, but for some reason I found it enormously difficult to try and pair places mentioned that I know with the existence of fantasy elements.  I’m not sure why that is. I’m sure if the setting was Melbourne or Sydney or some other Australian city I wouldn’t have had this problem, but because Brisbane seems so unlikely to me as a paranormal setting, what with being a resident, it took an awful lot of effort to suspend my disbelief.  Although I will admit to a little flash of schadenfreude when I noted that the mud-afflicted house was in Paddington.  Sucks to be you, richy rich!

There were some reasonably complicated reveals toward the end of the book relating to Verity’s mother and other family members, that may have been clearer to those who have read the first book, but provided for an action-packed finale.  The fact that Verity gives birth halfway through the book was also an unexpected spanner in the works but provides a new lens through which Verity views the sinister events that are unfolding around her.

Overall, if you enjoy urban fantasy novels and appreciate some diversity in the paranormal creatures you encounter in your reading then you should definitely give Corpselight a go.  If you aren’t a fan of jumping in at the middle of a series, start with book one instead – Vigil.