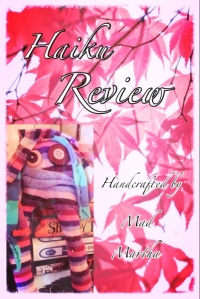 It’s Mad Martha with you today presenting a very unusual little offering in the world of literary fiction.  I was lucky enough to win a review copy of this one through the LibraryThing Early Reviewers Program and because of this have been introduced to a little gem of a read that is a perfect pick for holiday hermit reading.  The book of which I speak is Tita by Marie Houzelle.  Here is the blurb, from Goodreads:

Tita is seven, and she wonders what wrong with her. She has perfect parents. She puts on plays with her friends, spies on adults, challenges her teacher, and even manages to read forbidden books. She should be happy. But she dreams of a world without meals, and keeps worrying about her mother’s whereabouts, spoiling her own life for no reason at all. Tita wants to be good – but how?
As her small town vibrates to age-old Latin rituals on the verge of slipping away, Tita finds refuge – and a liberation- in books. 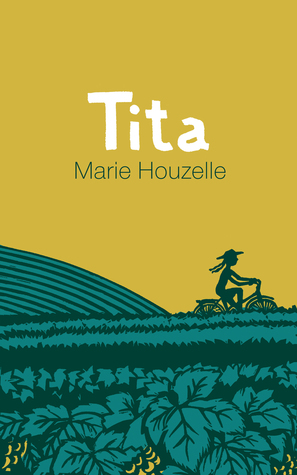 Now I usually make up my own description of books that I review, but I have slacked off today and used Goodreads’ blurb because I really can’t think of how to describe the happenings in the book, as they are a distant second to the characters’ relationships.  Tita is a precocious seven-year-old who is greatly interested in the workings of the adult mind and the way the social world works.  Fortunately for the reader, while Tita is precocious, she manages to be so without the usual irritiating attitude that goes along with it – in a sense, Tita knows how much she doesn’t know and is perfectly happy to annunciate the gaps in her knowledge in order to fill them.  Our fleshlings happen to be Catholic, so the references to Catholicism and its traditions and Tita’s schooling were both familiar and amusing.  If you don’t know much about Catholicism, I’m not sure how you’ll take those passages – hopefully they’ll give a good measurement on the ole’ odd-ometer.

I can best describe this book as charming.  Tita is a sensitive and astute narrator and the reader is left to ponder her observations, particularly those relating to the relationship between her father and mother, from an adult perspective.  I very much appreciated the introduction to French culture and language that I received in reading this book – I have always considered it a particular failing that of the many languages that I have studied, French was (and is) conspicuously absent.  Houzelle has redressed this to some extent, as the French language and its influence are threaded through almost every scene in this book.  There’s also a little glossary at the back, so non-French-speakers can better understand particular phrases or references.

This is a gentle read, where events move at the pace of a Sunday morning breakfast and I suggest that’s exactly the sort of feeling you should bring when embarking on Tita’s journey of musing.

Today I have a belated Christmas present for all you children of the eighties and contemporary eighties revivalists – the gem of nostalgic goodness that is Kevin Jakubowski’s 8-Bit Christmas.  I received a digital copy of this book from the publisher via NetGalley in return for an honest review – thanks!

8-Bit Christmas is an epic roller coaster of a tale revolving around nine-year-old Jake Doyle and his soul-crushing, arm-twisting, sister-enlisting quest to get the brand new Nintendo Entertainment System for Christmas, 1987.  Only one kid in Jake’s town has the power that comes with owning an NES (coincidentally, the richest and most spoilt kid in town) and he wields this power by forcing the neighbourhood kids to beg, borrow or steal their way into his house on a Saturday morning in the vain hope of securing a few minutes playing time.  After a tragic (and messy) event during one of these Saturday morning sessions, the parents of Jake’s town ban the purchasing of Nintendo systems, and the successful completion of Jake’s quest suddenly seems a lot less likely.  Cue Jake’s sister and her comparably crippling desire for a Cabbage Patch Doll, the collected baseball card resources of Batavia’s kid population and a whole lot of wishin’, hopin’ and prayin’ and Jake may just find that Christmas wishes do come true!   Or maybe not.  You’ll have to read to find out. 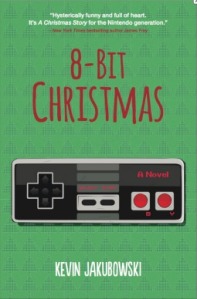 * you’ve ever felt the keen, incisor-sharp sense of desperation for some new-fangled consumer product that is woefully beyond your ability to attain

* you were a kid in the 80s or are currently experiencing a sense of faux-stalgia for a time period in which you were not born, but feel you know due to the proliferation of pop culture references currently doing the rounds on the interwebs

*you can’t go past a book that so expertly conjures up the atmosphere of your own childhood, that you feel that you probably actually knew the author as a kid, but have somehow forgotten

I LOVED this book.  Jakubowski has somehow managed to reach through a wormhole and pull out the sights, sounds and yearnings of kids in the late eighties.  The pop culture references are spot on.  The descriptions of the social pecking order and the factors that really influence kid friendships are flawless.  It is a fantastic read.  If you were a child in this time period, particularly if you were a boy and especially if you know, deep in your heart, the excitement and desire created by Nintendo at this time, I daresay you will thoroughly enjoy this book.

If you are a child (or teen) TODAY, with any kind of interest in toys, gaming and pop culture of yore, I suspect you will also thoroughly enjoy this book.  Jakubowski has written this with such kid-knowledge, that even contemporary kids will recognise the importance of Jake’s quest and relate to the difficulties of getting one over on the adults to attain the object of your desire.

But the best bit is the ending.  I had already rated it a five-star read in my mind before I got to the ending. The ending pushed me over into the elusive (and some say mythical) territory of the six star review.  And I’m not telling you what happens.  But you should read it.

Ahem. Let me assume *serious reviewer mode* today as we delve into…..

Obstacle number 3 in the What’s in a Name Reading Challenge – January First: A Child’s Descent Into Madness and Her Father’s Struggle to Save Her by Michael Schofield.

Category: Three – A book with a party or celebration in the title

January First is the memoir of Michael Schofield, father of January (Janni) Schofield, a little girl who has been diagnosed with childhood schizophrenia. It charts the extreme lengths that Janni’s family had to go to before her illness could be diagnosed and appropriate help obtained.  I was drawn to this book after seeing this family’s story on television – notably on Oprah and Dr Phil . 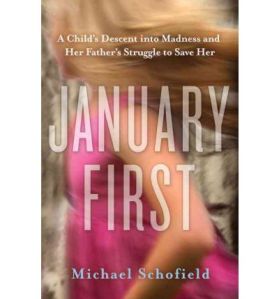 This book’s Point of Difference:

That would have to be it’s unusual subject matter and the author’s voice…more about that below.

– Well, it’s certainly an interesting read.  The author relates the day-to-day struggles of living with a child with extreme (and inexplicable) behaviours and I’m sure many parents would be able to relate to at least some of what he describes, if not to the levels exprienced here.

– I had a couple of problems with this book. Firstly, I came to this book after having seen the family in documentary style tv shows….from those it was obvious that Jani had some major differences in behaviour from your average 8 or 9 year old, and required medical intervention.  Unfortunately, in the book, the way her father describes some of these behaviours makes it seem as if Jani is just the typical, naughty brat one might see in the lolly aisle of the shopping centre, screaming until it gets its way.  I found this off-putting, as part of the family’s struggle was getting professionals to understand that her behaviour was atypical and dangerous to herself and others.

– Michael Schofield narrates the story with a spectacular disregard for his wife’s (Jani’s mother’s) abilities and level of caring about their daughter.  In fact, almost everyone in the book is depicted as having a far lower level of rapport and ability to manage Jani than Schofield himself. I’m not sure whether this was a deliberate attempt to relate the actual dynamic of the relationship and his real emotional responses to the situations they found themselves in – he does address this briefly towards the end of the book –  but I found his narration arrogant and coupled with my first con, it left me with the (unwanted and judgemental) feeling that it was unsurprising that he didn’t find the help Jani needed sooner.

I wanted to like this book more than I did. I was hoping it would be an insightful glimpse into the lack of services available for mental health generally and children’s mental health specifically.  It did accomplish this to a degree, but I really struggled with building mental rapport with the author and this diminished my levels of empathy toward his situation.  If you would like to give this one a try (and it’s certainly worth a look, despite my cons) I would suggest doing so after viewing some of Jani’s story on video, to give you an idea of Jani as a person.

Here’s a little bit of Jani’s first appearance on Oprah Winfrey, to start you off.

Oh, and if  you are wondering why I started off calling her Janni and changed to Jani, all will be explained in the book.

Until next time, campers!
Bruce