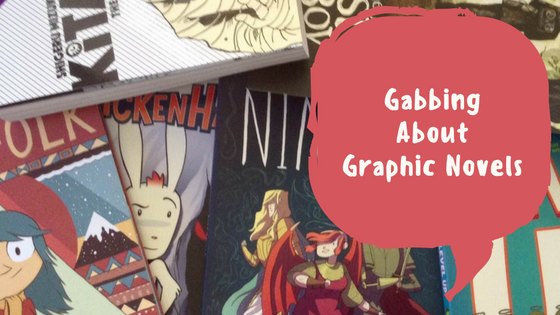 I’ve been diving into the graphic novels with gusto so far this year and today I have two eye-pleasing tomes that deal with the spectre of past and future conflict.  One is realistic in tone, while the other pits three young mages against a world in which futuristic machines have resulted in the downfall of humanity.  We received both titles from their respective publishers via Netgalley for review.

The Lighthouse by Paco Roca

Francisco, a wounded, despairing sixteen-year-old Republican guard in the Spanish Civil War, is trying to flee to freedom by crossing the French border. In his escape, he encounters an old remote lighthouse, far from the warring factions. He is granted shelter by Telmo, the aging operator of the lighthouse. As Francisco recuperates, Telmo’s tales of epic adventurers who sailed the lost seas and discovered worlds unknown reignite the spark of life in the young soldier.

The underlying dark themes of war and violence are reflected in the monochromatic art in The Lighthouse.  The story opens on the escape attempt of Francisco, a young soldier who is offered sanctuary by elderly but cheerful Telmo, the keeper of a lighthouse.  As Francisco learns more about the lighthouse and its workings, and assists Telmo in building a boat from the flotsam that washes up on the beach, he begins to heal from his experiences and question his commitment to his cause.  When events take an unexpected turn for Francisco later in the story, he is forced to take his fate into his own hands and decide what kind of life he wants to lead.

The Lighthouse deals with the sort of choices that, when made, define a life.  Telmo has made his choices in life and is content to keep the lighthouse in order in anticipation for the day when the government will send a new bulb to restore the lighthouse to full function.  Francisco, who was previously unwavering in his commitment to his ideals, begins to think for himself under Telmo’s fanciful guidance.

This is not an overly long read, but it certainly packs a punch and will generate discussion about loyalties to duty and to self, and the sacrifices that individuals make to attain their goals.  This would be an interesting inclusion in a secondary or university course focusing on ethics.

It’s Mage against the Machine! Magic vs technology in Roar’s newest graphic novel. When three apprentice mages are sent to help a neighboring guild, they reignite a decades-old war with a robot army that has destroyed the world. 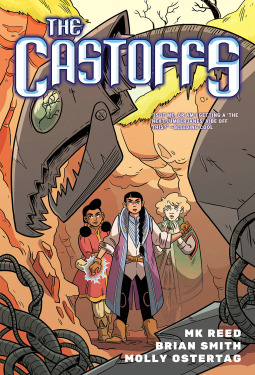 This opening volume of The Castoffs seems like it will be a welcome addition to the collection of graphic novels being released that feature strong female protagonists and characters from diverse backgrounds.  The story opens on a historical battle between mages and “surrogates” – machines that were created to assist humanity but have caused chaos and carnage.  Our three protagonists, Charris, Ursa and Thrinh, are from a later period in history, when the use of technology has been largely abandoned and mages are free – mostly – to use their skills.  The three young women are chosen to fulfill what seems to be a simple delivery job, but on arriving at their destination it becomes apparent that there is much more afoot than the trivial errand on which they were sent.

Cue the discovery of a resurgence of surrogate use and the difficult decisions that follow: do the girls attempt to put down the uprising alone or return to the Guild for help?  Can the three get along for long enough to obtain a result?  And what skills are some of the girls hiding and why?

After a start that didn’t exactly draw me in, I warmed to the characters and became absorbed in the intrigue unfolding before them.  The bickering between the girls was by turns amusing and irritating, but by the end of the book most of that had been put aside in favour of interesting reveals and kick-ass magic skills.  I think this will greatly appeal to readers of graphic novels aimed at the YA market, as well as those who just love a good story featuring magic versus technology.  The diverse female protagonists will also be a drawcard for those specifically seeking out wide representation in their reads.

Overall, this was a promising, action-packed start to the series and I am interested to see where some of the cliffhanger plot points go from here.

Welcome to the September edition of the Fiction in 50 Challenge! We invite you to join in and compose a piece of writing in 50 words or less on our current prompt and then link it up to the linky, or pop a link in the comments so all can appreciate your prodigious talent.  I’ve also started using #Fi50 when I share entries on Twitter, so feel free to do the same!  This month’s prompt is….

For more information about the challenge, just click here.  The linky below will be open for a month so you’ve got plenty of time to craft your masterpiece and join in.  Here’s this month’s linky:

And here’s my effort.  I’ve decided this month to tip my hat to that legendary poet of war, Wilfred Owen.  My work today is inspired by his poem Dulce et Decorum est, which you can familiarise yourself with here…but of course you already know it 😉

I have titled my piece….

Bent double, muscles slack, I take up stance on the battleground. I am ready.

Centuries ago, international conflict evolved past such crude problem-solving as violence, bombs, indiscriminate death. Instead, we trip the light fantastic.

I am a soldier of the shimmy and sway.

Your turn! For those preppers amongst us, October’s prompt will be super-democratic in that you get to fill in the blank:

You choose! We had a lot of fun with the last fill in the blank prompt a few months ago and you can check out some of those entries here if you need inspiration.