Welcome, fellow oddballs, to this double-dip of silliness.  Today I have adult fiction and YA fiction for you and they are linked by their commitment to the advancement of character groups too often overlooked in literature – specifically, undead detectives and homeless delicatessen workers.  Load up your bizarre (and slightly gross) savoury snack of choice and let’s jump right in.

Slimy Underbelly by Kevin J Anderson follows zombie detective Dan Chambeaux (“Shamble” to his friends) on a few cases with a definite supernatural twist.  Dan lives in the Unnatural Quarter, home to all manner of supernatural and/or formerly living residents whose existence came to be after an accident with a Necronomicon.  Now undead, not-human and ordinary folk rub along together in this interesting part of the city.  When a worsening stench overtakes the detective’s offices and a pre-pubescent supervillain presents with a case of wrongful eviction from his underground lab, Dan is forced to descend into the sewers to get to the bottom of the problem.  There he bumps into Ah’Chulhu, a tentacular-faced real estate mogul who is playing hardball with his tenants and the whole Unnatural Quarter property market.  As the plot (and the stench) thickens, Dan discovers that he must unearth Ah’Chulhu’s real motive before the entire Unnatural Quarter sinks below the level of social acceptability.  Throw in an Ogre opera singer who has lost his voice, a gang of violent garden gnomes on a spree of armed robberies, and an election campaign that could literally cause the earth to move, and you just know that things are about to get interesting. 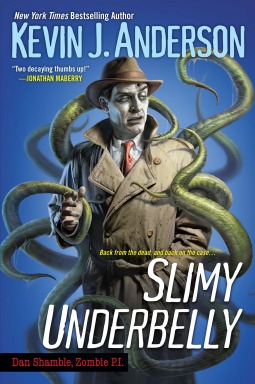 …a fun and silly detective romp that bursts with characters who reside slightly left of centre.  This book really worked for me as light refreshment during a heavy review period and I was most appreciative of the brain-break.  The highlight of the book for me was most definitely the array of oddbod characters, from Dan himself, to the beleaguered Ogre Stentor, who spends most of the book shouting (in a stage-whisper), “Help! Someone’s stolen my voice! If found, please call the police!”, to the Aussie-accented Ah’Chulhu, who reads very like a slimy-faced Steve Irwin, to a helpful barbershop quartet of toad demons.  Really, the book has everything.

…you’re after serious noir or detective work that doesn’t involve werewolf prostitutes.  There. I said it.

Seriously though, if you aren’t up for a gobful of silliness and disbelief-suspension, you should probably be moving right along.

This is the perfect book for when you don’t want to have to work too hard and you’re looking for something that is original and fun and will give you a hearty chuckle or two (or more).  I did feel that the plot dragged in a few places (mostly for me it was during the sections involving the weather wizards and their constant bickering.  Although admittedly, one of the weather wizards becomes an important character later in the story and therefore redeemed this plotline a little).  Being a country-monster of Ah’Chulhu, I was slightly affronted that an Australian was cast in such an evil light, but he has his soft side as well, so I ended up forgiving Anderson for that one.  Overall though there are plenty of intertwining plotlines and original characters here to keep even the most cynical, cranky reader from getting too snarky.  Slimy Underbelly is a great pick for when you’re sunning your skin/tentacles/fur/scales/rippling bubonic flesh on a beach (or similar) and you just want to relax and escape into a world that is slightly more bizarre than your own.

**I feel I have to point out that I did pick up one little flaw in Ah’Chulhu’s authentic Australian-ness.  At one point, while dismissing the zombie detective, Ah’Chulhu uses the word G’day. Typically Australian one might think, except this term is only ever used by native speakers in greeting, never in parting.**

Now onto some oddness for the young adult market….

Welfy Q. Deederhoth: Meat Purveyor, World Saviour by Eric Laster is a humorous sci-fi romp set partly in a delicatessen and partly in an alien world in the midst of an invasion (by a second alien species).  The book opens with Welfy, hungry teenaged lad of no fixed address, attempting to find work in exchange for something to eat.  Morton, owner of Grammercy Deli, takes pity on Welfy and gives him a job, thus beginning Welfy’s exposure to the aliens among us (well, kind of).  On descending to the deli basement, Welfy is transported into an alien world, in which he is immediately mistaken for “The One (with a dirty apron)”, a prophesied hero sent to save the Brundeedles from the oppressive and violent Ceparid race.  Along with the alarming discovery that he can now pull weapons from his deli apron pocket, Welfy meets a whole host of Brundeedles, including Princess Nnnnn and her little brother Raoul, and her husband, the jealous Prince Ffff as he fights alongside them to save the Brundeedles from assured destruction.  But hang on – how is it possible for a deli basement to hide a portal into another point in space?  Welfy is going to need all the help he can get from both sides of the galactic divide  (as well as an apron pocket full of weapons-grade salami) in order to save the Brundeedles and figure out his true destiny.

…a wholly original take on the “undiscovered hero” plotline for the upper-middle grade, lower-YA audience.  This reminded me of nothing so much as Adam Rex’s The True Meaning of Smek Day, not only because of the sci-fi themes, but also because both books feature a fun balance of humour and action with a healthy side order of silliness.  Books like this work, in my opinion, because although they contain situations and/or characters that defy logic and disbelief suspension, the characters within the story take the story seriously, and because of this it’s much easier to get sucked in to the plot.

Laster has also managed to create a pretty complex protagonist in Welfy.  He’s a homeless kid with an uncertain family history and a more recent track record in foster care.  He’s also a mature and humble sort of guy, prepared to work to get ahead.  I appreciated also the poignant moments amongst the alien chaos.  The author has really done a good job here providing insight into why life on the street might be preferable for some young people than staying in the foster care system.

…you expect your sci-fi to be heavy or serious, or you find characters with unpronounceable names irritating.  There is a fair bit of “Brundeedle language” spoken in certain sections here and I can imagine that some people might find it a bit annoying to read bits of…well, unreadable text.  You’ve been warned.

This is going to appeal to sci-fi fans of all ages and those who are prepared to take a chance on a story out of left field.  Vegetarians need not apply.  The cover actually gives a pretty good overall impression of the contents and atmosphere of the story, and I would love to see this story in graphic novel form in the future.

To add to the whole “this book is a bit different to your average” theme, Laster has thoughtfully provided an appendix  which outlines how to translate Brundeedle language into English.  And for those stout-hearted code-breakers among us, he’s also included a news article written in Brundeedle language in order for you to practice.  Finally, the book includes a little teaser of a story called “The Case Files of Erasmus Twiddle”, so you can’t complain that Laster hasn’t given you some bang for your buck.

Give it a go if you want to pull something different out of the apron.

* I received both titles from their respective publishers via Netgalley*