Today’s YA Double Dip Review will require a snack that won’t repeat on you easily because today’s books feature a fair bit of graphic gore.  We received both of today’s titles from HarperCollins Australia for review, so let’s get dipping!

First up is the conclusion to Derek Landy’s action-packed, monster-fuelled Demon Road series, American Monsters.  Here’s the blurb from Goodreads:

Amber closes in on her murderous parents as they make one last desperate play for power. Her own last hopes of salvation, however, rest beyond vengeance, beyond the abominable killers – living and dead – that she and Milo will have to face.

For Amber’s future lies in her family’s past, in the brother and sister she never knew, and the horrors beyond imagining that befell them. 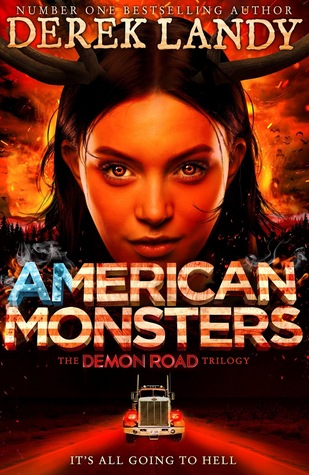 …a finale that really does the series justice.  I am so glad that Landy didn’t fall into the trap of trying to draw the ending out as long as possible while attempting to eke every last ounce of readability out of the story because its an all too common tactic of authors finishing up a profitable series.  American Monsters is perfectly paced, switching between action and banter, with some excellent twists to keep the ending interesting.  The book is a reasonably quick read, which I was pleased about, and there is no faffing about introducing new characters or new plotlines that take up space. Rather, Amber and Milo get straight down to the business of hunting down her parents (with a few Astaroth-ordered stop offs along the way) while trying to figure out a way to backstab both her parents and Astaroth in one (or at the most two) easy manoeuvres.

…you haven’t read the other books in the series.  You could probably still enjoy the action parts of the book, but as all of the characters and back story are well and truly established, you may find yourself a tad confused about what’s going on.  I myself had a bit of trouble remembering exactly who was who with a few of the bad guys and serial killers that made an appearance, and a character glossary at the beginning would have been helpful for old fogeys like me who suffer from a touch of the Old Timer’s disease.

I have to reiterate what a satisfying series finale this is.  It’s pacey, familiar faces turn up in unexpected places and while I did say there are no new characters to muddy the waters, there is a hitherto unmet mysterious trucker who certainly throws a few hellish spanners in the works for Amber and Milo.  There’s a lot more soul-searching going on for Amber here (although not so much that it slows the pace) as she attempts to reconcile being a demon’s servant with the more human and humane parts of herself.  The ending wraps things up nicely, while leaving the way open for a possible fourth story, but Derek Landy returning to a series after it’s obviously finished? Pfft, as if that’s likely to happen!

Next up is a story of new beginnings: Girl in Pieces by Kathleen Glasgow.  Here’s the blurb from Goodreads:

Charlotte Davis is in pieces. At seventeen she’s already lost more than most people lose in a lifetime. But she’s learned how to forget. The broken glass washes away the sorrow until there is nothing but calm. You don’t have to think about your father and the river. Your best friend, who is gone forever. Or your mother, who has nothing left to give you.

Every new scar hardens Charlie’s heart just a little more, yet it still hurts so much. It hurts enough to not care anymore, which is sometimes what has to happen before you can find your way back from the edge.

A deeply moving portrait of a teenage girl on the verge of losing herself and the journey she must take to survive in her own skin, Kathleen Glasgow’s debut is heartbreakingly real and unflinchingly honest. It’s a story you won’t be able to look away from.

…one part standard psychiatric hospital story, one part standard recovery story and one part interesting take on “homeless girl makes good” story.  What Glasgow has done particularly well here is the realistic depiction of the post-hospitalisation experience, in which Charlie is left on her own with no support and is expected to manage both her illness and the basic problems of life, like finding a job and somewhere to live. The short, choppy chapters, particularly at the start and towards the end of the book, reflect Charlie’s state of mind and her precarious situation. It’s obvious that Glasgow has insider knowledge about the internal conflict experienced by someone trying to recover from trauma or mental illness that swings between choosing life-affirming strategies and giving in to familiar impulses.  Charlie is a young woman who has experienced abandonment, the loss of family and friends, drug abuse, homelessness and sex trafficking before her sixteenth birthday and as a result, is left with a steep hill to climb towards a comfortable life.  Hope prevails though, surprising as that is, and Charlie keeps putting one foot in front of the other, despite being rocked by those around her.

…you’re looking for a story bathed in sunshine and rainbows.  Even though there are some hopeful aspects to the story, overall it can come across as a pretty depressing read.  The amount of struggling that Charlie has to do just to catch a break is a bit of a downer, but once again, that’s often the reality for people on the bottom rung of society trying to climb up.  There’s also a fair amount of violence (self-harm in particular), drug use and sexual assault, so if those are topics that you’d rather steer clear of, this is definitely not the book for you.

While I think this is an authentic and engaging story about a traumatised young woman trying to make a go of her life against all odds, I still feel like I’ve read this all before.  Call it an occupational hazard of blogging, or the consequence of having a special interest in fiction (and particularly YA fiction) relating to mental health, but I do feel like I’ve seen this story, or versions of it, umpteen times before, in Girl, Interrupted, The Mirror World of Melody Black, The Pause, Skin and Bone, It’s Kind of a Funny Story, Cracked and pretty much all of Ellen Hopkin’s work, not to mention the memoirs of Kate Richards, Sandy Jeffs, Anne Deveson and Patrick Cockburn.  If you have not delved quite as deeply as I into the realms of fiction relating to mental illness and trauma, then Girl in Pieces would probably be a good place to start, provided you are prepared for some confronting content in places.  Glasgow has left out no detail of the travails and triumphs on the road to recovery from a place of deep suffering and readers will be wishing Charlie the best of luck and all good things by the time the novel reaches its conclusion.

Have either of these titles given you an appetite for more reading?