It’s Mad Martha with you today for another haiku review, so plump up your feathers (or feathered pillow) and join me in my wintry foray into a  fable-esque tale for youngsters, set in Japan and including elements of Russian legend: The Snowbirds by Jim Fitzsimmons.

Here is the blurb from Goodreads:

In a small Japanese mountain village, young Shoji enters an ice carving competition. He soon finds he has a rival in Orochi, another boy in the village, who tries to sabotage Shoji’s entry, but with the help of his family Shoji creates a most beautiful Snowbird.

When the other ice carvings are revealed they discover that Orochi has stolen Shoji’s idea and has also carved an equally beautiful Snowbird. The judges cannot decide the winner of the competition so they announce that the result will be declared the next morning.

During the night Jack Frost discovers the two Snowbirds and thinks one of them will make an ideal companion for his Grandfather Frost, the Snow King. At the same time Shoji, anxious for the safety of his Snowbird, sneaks out of his house and meets Jack Frost who explains his plan. Shoji agrees to let him have his Snowbird, but they are both interrupted by the arrival of Orochi who demands payment in return for his.

Jack Frost brings the Snowbirds to life and tells them they must travel to the North Pole where his Grandfather will choose one of them to be his companion. On their journey they meet different characters and encounter many difficulties until they both finally arrive, but which one will be chosen? Jack Frost has a cunning idea to help his Grandfather decide… 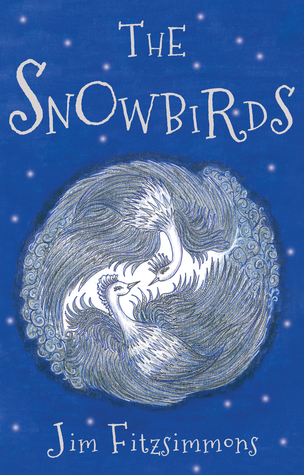 Fitzsimmons has developed an original and interesting story here, but at the same time it feels incredibly familiar due to the style of writing that can only be described as a fable.  I think this style will appeal both to grown-ups, who will appreciate a new and different “fairy tale” to read to their youngsters, and to children, who will be assisted into independent reading by the familiarity of the format.  At only 78 pages (in the digital version), the story is also very attainable for younger readers who are venturing into reading on their own.  The tale is very atmospheric, with the wintry surrounds leaping off the page through the descriptive writing and I could almost feel the snowflakes as I read.  The descriptions of some of the scenes, and of the snowbirds themselves are quite beautiful and lend themselves to easy visualisation for the reader.  I can certainly imagine youngsters and their grown-ups wanting to hop onto Google to have a look at some real ice sculptures after reading these sections.

Kids will love to despise the odious Orochi and his devious and spiteful actions towards Shoji’s delicate creation.  I’m sure they will also relish the fact that Orochi’s snowbird bears an incredible resemblance in personality to its maker.  The story is illustrated with line drawings that give a sense of naivety and reflect the tone of the story.

I was quite surprised at how quickly and how easily I became engaged in the story.  Not being a massive fan of traditional fairy tale formats, I appreciated the way that Fitzsimmons has mixed old and new.  The interesting setting helped me engage in the story also, as did the fact that the story was devoid of princesses.  I think parents and carers will really like the strong family bonds represented in Shoji’s family and the emphasis on perseverance,  truthfulness and generosity underlying Shoji’s actions.

If you are a fan of fairy tales and fables, The Snowbirds is well worth seeking out to add to your collection.

Yours in wintry, icicle-laden magic,