Welcome to the very democratic October edition of Fiction in 50! To find out the skinny on the challenge just click on the image above.  Otherwise, we’d love it if you would join in with this month’s Fi50, which asks the stout of heart to respond to a prompt with a piece of fiction using 50 words or less.  This month’s prompt is….

You fill in the blank!

So it can be the darker side of whatever you like…cheese…beauty pageants…grain-fed triffids….anything!  Keen-eyed readers will notice I haven’t included a linky this month, but I encourage participants to leave a link to their contributions in the comments so others can hop around.  Also, if you want to share on twitter, you can use the hashtag #Fi50

Here’s my contribution – it’s a little bit spooky due to the proximity of All Hallow’s Eve. Enjoy! *Oh, and the (sing) is for singular and (pl) is for plural in case grammar is not your strong point.*

The Darker Side of Conjugations

You (sing) are hiding.

He, she or it is coming.

He, she or it is biting.

We are all coming.

You (pl) are doomed.

Don’t forget to add your link in the comments – I can’t wait to see what people have come up with! Oh, and new players are always welcome.

Next month’s prompt will be:

And if you are looking for other ways to kill some time in a literary manner, why not have a go at my Bookish Year in Review Survey ? It’s good for what ails ya! Good luck!

Until next time, may your hiding places remain undiscovered by shambling hordes,

Afternoon story-lovers! Today I have another title for the grown-ups and this one is a collection of short stories, something that I know many of you love to indulge in (for both reading and writing).  Irregular Verbs and Other Stories by Matthew Johnson features a whole range of short delights that run the gamut from accidental time-travelling folk from ancient civilisations, to the deliberate time-travelling citizens of a future Now.  But there’s more – much more than just time travel – to whet the appetite of anyone who likes to get stuck into a good yarn, and knows that for some readers, it’s better to be in it for a good time, than a long time. 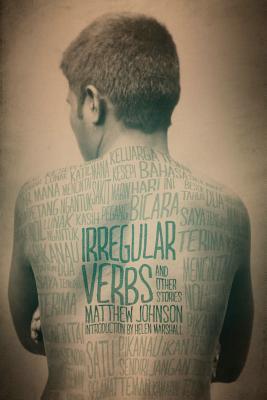 *you keep meaning to read a short story collection, but never quite get around to picking one up (surely it can wait…what harm could waiting do?)

* you’ve ever had nightmares about elderly zombies, gnashing their terrible dentures and waving their sharpened-to-a-point bus passes

I was pleasantly surprised by this collection because, although I enjoy reading short stories, I often find that collections can be hit and miss.  With Irregular Verbs I was happy to discover that not only did I enjoy the vast majority of these stories, but I also found myself deeply engaged in the tales within the first page.

Johnson seems to be a master at efficient, realistic world-building.  A number of the stories take place in alternate versions of our own time, or worlds that feature some aspect of time travel and I never felt like I had to work to figure out what was going on.  Within the first page or two, I was totally drawn in and the idiosyncracies of each world seemed perfectly reasonable.

My favourite stories of the bunch included the opener, which features a world in which complete languages are habitually created between partners, neighbours and small communities but are subject to the flimsy commitment of conversation in order to remain alive.  A timely warning appears in a tale in which those things that we can’t seem to find time for have been turned into commodities, ready to be purchased on easy-to-manage monthly installments.  Johnson also tries a new take on the Zompocalypse, with old-age pensioners making up the bulk of the shuffling hordes (complete with slippers and dressing gowns).  Another highlight for me was the one-way time-travel tale in which welcome centres have been created to deal with a strange anomaly in space/time that causes random groups of people from Ancient Roman times to be whisked into contemporary history.

Overall, I found this to be a fascinating collection of stories that deal with scenarios that give pause for thought.  Whether it’s the question of what exactly it is that keeps a common history safe in the minds of a society, or the conundrum of end-of-life directives for a being that seems to be immortal, these tales will get you thinking and I recommend it for the fearless, intrepid sort of armchair traveller.

Irregular Verbs and Other Stories was released on June 18th, and I received a digital copy from the publisher via Netgalley.

I am very excited today to bring you my Read-it-if review of The Word Exchange by Alena Graedon – my second five star review of the week.  It’s been a very fortuitous seven days, I must admit. I received a digital copy of this book from Hachette Australia via Netgalley. Thanks!

So I know I may have mentioned once or twice that I was over dystopian novels.  Even the best of us can sometimes be wrong, however, and The Word Exchange is just the kind of dystopian/apocalyptic tome that I will happily let slip through the net.  Why? Because it’s the thinking person’s dystopian.

The plot has a lot of twists and the character relationships and reveals are quite complex, so there’s not a lot I can elaborate on without risking spoilification, but let me have a go at a synopsis.  In a not too distant future, the written word has become somewhat anachronistic.  People are attached (in some cases literally!) to their “Memes” – devices worn like a headpiece, that allow instant access to the internet, do the job of a phone, complete financial transactions and even make intuitive decisions for their wearers based on stored prefences.  For instance, if a wearer starts to think it’s time to leave a party, their Meme may automatically call a cab or list the quickest train times and routes home.  Written language is restricted only to very specific professions and those with a nostalgic streak.

On the night Ana’s father, a key figure in the production of the latest (and final) edition of the North American Dictionary of the English Language goes missing, a sequence of events are set into motion that could result in the end of language as we know it.  As the shady business empire Synchronic Inc promotes a new site that allows the general public to create their own words and definitions and sell them through an online language marketplace, some individuals begin to display symptoms of aphasia and fears of a highly contagious Word Flu begin to spread.  For Ana, her friend Bart, and most of the people they love, things are about to get out of hand in ways no one could ever have imagined. 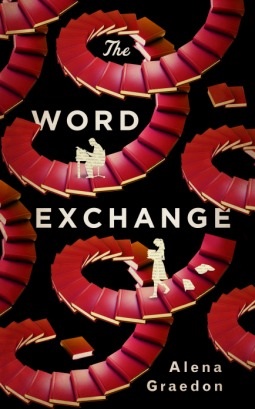 * you always carry stamps in your wallet, you have never owned a mobile phone, your computer has a stylish, modern, walnut-laminate veneer, and you are reading this post via an internet server powered by a hand crank

* you prophesy that the reduction of our rich language into clichéd acronyms such as LOL, OMG and FTW can only end in the destruction of life as we know it

As I said, this isn’t the kind of book that I frequently read, and it took me a few chapters to get my head around what was happening.  The book is told from shifting points of view, between Ana and her friend Bart, and initially I found Bart’s chapters to be hard going due to the character’s idiosynchratic voice.  This eased up considerably when the circumstances surrounding the disappearance of Ana’s father gather momentum, and more details about the future world become apparent.  Ana’s chapters include footnotes, for reasons which will become clear at the end of the story, but as I was reading this on a Kindle, often the notes appeared three or four pages past their related sentences and I found it mightily distracting trying to flick back and forth between screens.  Luckily the story was engaging enough that I felt that the flicking was a necessary evil in order to get to the end.

Being someone who reads a lot of young adult fiction, it was refreshingly different reading a book that is well and truly nestled within adult fiction – I found the complexity of the storyline a real drawcard and I enjoyed trying to piece together the loyalties of the characters, figuring out who was working with who and on which side of villainy various characters fell.  The best thing about this book is undoubtedly its unique take on the concept of apocalypse (which has really been done to death, at least in the YA market) and the fact that the author wasn’t afraid to imagine situations that really make the reader question how they relate to, and use, language and technology on a day to day basis.

The book has an atmosphere of distrust and dis-ease that slowly overwhelms the characters and seeped out into my cosy little reading nook.  With the Memes in the story having such a starring role in how things pan out, I did feel a bit creeped out that I was reading on a digital device, rather than in good, old-fashioned, safe print!

This certainly isn’t a light beach read, but while the concepts are fairly heavy, they are balanced perfectly with action and enough mystery to keep the reader working to click the pieces into place before the narrator does.  I recommend The Word Exchange to anyone who’s looking for a read to make them sit up and pay attention – and creep them out enough to take an internet-holiday for a few days!

The Word Exchange is due to be published in early April…but I’d preorder if I were you, in case the Word Flu breaks out in the meantime.