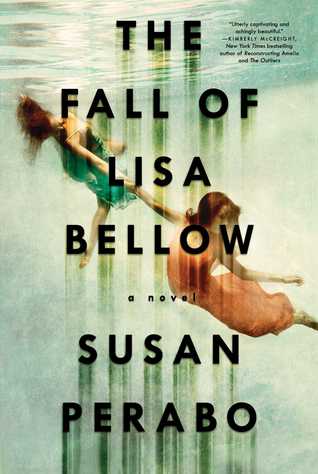 That’s the “intriguing read ahead” alarm, in case you didn’t recognise it.  Today’s book is adult fiction novel The Fall of Lisa Bellow by Susan Perabo.  We received a copy of this one from Simon & Schuster Australia for review and even though I didn’t know what to expect going into it, I know I wasn’t expecting such an absorbing, fascinating and subversive look at the inner workings of various minds….

On that tantalising little nugget, here’s the blurb from Goodreads:

When a middle school girl is abducted in broad daylight, a fellow student and witness to the crime copes with the tragedy in an unforgettable way.

What happens to the girl left behind?

A masked man with a gun enters a sandwich shop in broad daylight, and Meredith Oliver suddenly finds herself ordered to the filthy floor, where she cowers face to face with her nemesis, Lisa Bellow, the most popular girl in her eighth grade class. The minutes tick inexorably by, and Meredith lurches between comforting the sobbing Lisa and imagining her own impending death. Then the man orders Lisa Bellow to stand and come with him, leaving Meredith the girl left behind.

After Lisa’s abduction, Meredith spends most days in her room. As the community stages vigils and searches, Claire, Meredith’s mother, is torn between relief that her daughter is alive, and helplessness over her inability to protect or even comfort her child. Her daughter is here, but not.

So, what’s the social protocol if a tragedy befalls someone you don’t particularly like?  Is there an acceptable level of schadenfreude that can be bandied about or do you have to pretend that you really care deeply about the other person (who would never have given one single toss about you)?

What if you are the mother of the girl who isn’t kidnapped?  Surely there must be some concession to such a mother, an allowance of a certain amount of public joy that her child was spared, despite the unnamed terrors that may (or may not…but probably are) being committed upon the kidnapped child.

These are some of the questions that are explored in The Fall of Lisa Bellow, as viewpoints switch between Meredith (the un-kidnapped child) and her mother, Claire, in the aftermath of the Deli Barn robbery in which Meredith’s classmate (and locker neighbour) is kidnapped.  Lisa Bellow is one of the cool kids, a mean girl. Meredith is not.  Meredith is simultaneously unsurprised by the fact that the kidnapper would choose Lisa to abduct – skinny, blond-haired, beautifully shod Lisa – instead of plain, awkward Meredith, and drawn to the gap that Lisa has left in the hierarchy of middle school social totems.

Claire, Meredith’s mother, is unashamedly glorying in the fact that her daughter was spared the horrors of kidnap (and no doubt rape and murder) that has been visited upon the Bellow girl, but only on the inside.  She learnt long ago that sharing her more vengeful thoughts relating to those who would harm her children, even with the man she married, is not necessarily a path to peaceful relationships.  Since her son and Meredith’s older brother Evan was visited with a tragedy of his own, Claire has sensed the bonds between her and her children weakening, and her place in the family unit becoming more vague and nebulous.

This is not a book in which the focus is on the hunt for the kidnapper and a swift and action-packed resolution for Lisa.  This book is about ramifications.  The ripple effect that occurs when one person is removed from a social context slowly spreads to encompass all those to whom they were once connected, even in the smallest of ways.  The voice that the author has used here, both for Meredith and Claire, perfectly suited the complex emotional state that the two are working through.  There is plenty of dark humour, with a spotlight on those socially inappropriate thoughts we all have about revenge and people we deem nasty or lauded for absolutely nothing getting their comeuppance.  The jerky and somewhat detached narrative style perfectly suits the level of weirdness that one might expect to experience on having to slot back in to normal life immediately after a majorly traumatic event – especially one that is ongoing and unresolved.

Lest you think that this is a dreary, serious book, allow me to say that I thoroughly appreciated the characters of Evan and Mark (Meredith’s brother and father respectively).  Evan is so utterly likable that his presence is like a stabiliser for the craziness of the outside world….until it’s not.  Mark is a concrete helper, in that he will provide any kind of help necessary, as long as it involves a concrete object – picking up some tater tots from the store, providing new shoes on request – but is less helpful when it comes to spotting and managing emotional states on the verge of collapse.  These two characters provided a neat foil for the darker thoughts of Meredith and Claire and overall the author has done a stellar job of creating an authentic-feeling family in semi-crisis.

**On a side note, can I just say that I was ridiculously overjoyed when reading about the battling animals that Evan and Meredith played with as children (and sometimes still use) because…..I OWN THE EXACT SAME BATTLING ANIMALS!!!!! The ones in the book are surely based on the Papo range of mythical creatures.  I checked, and the Lion does indeed carry a sword in one hand and an axe in the other (although where Meredith and Evan’s Lion is missing a tail, ours is missing part of the axe – not due to biting though).  My favourite is the Rhino.  He guards Mad Martha’s yarn stash.  Just saying.**

I don’t normally enjoy “character relationship” books as much as I did this one, but there were so many aspects of the story that resonated with me on some level that I can do naught but tag this as a Top Book of 2017 pick!