Thank you for joining me as I claw my way up the teetering goliath that is my current TBR pile. Today’s book is one I picked up second-hand after having placed it on my wish-list very soon after Mad Martha returned from a memorable sojourn to the seaside town of Whitby in the UK, declaring that we should now search out and read every book ever written with Whitby as a setting. And there have been a lot. Although we still haven’t read the most famous by far.

Here’s a picture of Mad Martha enjoying the B&B in which she stayed. If you squint, you can just see a bit of the Abbey in the distance out the window:

And here she is enjoying a long-awaited wash in the Whitby Laundromat washing machine: 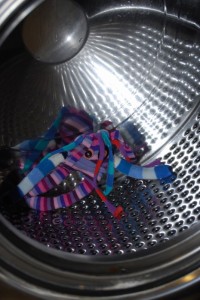 And just for fun, here’s one of the Abbey that looks like it’s screeeeeeeaaaaammmming!

But I digress. Today’s book is The Whitby Witches by Robin Jarvis, a rollicking and surprisingly dark (in places) tale that was first published in 1991, although it has the ring of a book published much earlier. Here’s the blurb from Goodreads:

At first glance, the small seaside town of Whitby seems quiet and charming, but eight year-old Ben and his older sister Jennet soon learn that things are not always as they seem. Moved about from foster home to foster home, Ben and Jennet hope to make a fresh start in Whitby. But Ben sees things and people others cannot. There’s something unusual about Alice Boston, their new guardian. And what is that horrible howling Jennet hears late at night? Something wicked’s brewing in Whitby. Can Ben and Jennet put it to rest?

This was an unexpected reading experience for me because there was just so much story packed into the pages. There are the witches and witchiness of the title of course, but then there are fantastical creatures, an ongoing (and progressively more deadly) murder investigation, a strange nun that might not be what she seems, an ancient curse, pregnant cats, as well as an astoundingly action-packed climax that features time-travel along with everything else.

And does anyone else think that Alice Boston bears a striking resemblance to one of the TV versions of Miss Marple??

So I didn’t expect there to be quite so much going on in this book, but I really appreciated how the author gives the young reader enough credit to put in some pretty creepy content. For a start, there’s the terrifying hound on the cover of this edition. Then there’s quite a lot of violence directed towards old ladies. I was genuinely surprised at a few points that Jarvis was brave enough to pen the deaths of the aforementioned old ladies in such vivid, atmospheric detail.  Actually, now that I think about it, there are a number of scenes that had me thinking, “Oh, that’s a bit shocking!” and this disposed me fondly toward the author for having the gumption to trust that younger readers can handle some grisly, scary stuff and come out the other side unscathed. I suspect this is why the book felt like one that was published before the 90s, because there doesn’t seem to be any coddling through the difficult bits.

Overall, this is one of those stories that has all the classic elements – abandoned siblings, a setting oozing with its own character and history, mysterious magic and just plain, unadulterated adventure! As this is part of a series, I will now add the others in the set to my ever-growing TBR pile and hopefully get to them in the not-too-distant future.

I recommend The Whitby Witches to anyone (especially mini-fleshlings of the upper middle-grade persuasion) looking for good old-fashioned feats of danger and derring-do.