Today’s Tomes from the Olden Times is really a TBR Friday post in disguise because I plucked The Boyfriend by R. L. Stine right off my TBR shelf after having had it sit there for an indeterminate amount of time (more than one year but less than three).  I can’t even remember exactly where I got it from, save that it is a second hand copy – it either came from a jaunt to the Lifeline Bookfest or from the Library cast-off shop at Nundah.

Even though this is a Tomes from the Olden Times post – the book having been originally published in 1990 as part of the Point Horror series of YA books – I’m not entirely sure, even after reading it, whether or not I did actually read this one way back when.  I certainly read others of the series, Beach Party,  along with Beach House, being two I am 100% certain I read, while the covers of Hit and Run, The Baby Sitter and April Fools all look very familiar and were no doubt passed around the class during the height of the horror-reading frenzy of ages past.

Anyway, back to The Boyfriend.  Here’s the blurb from Goodreads:

Too bad about Dex. He was in love with Joanna. She broke up with him. And then he died.

Joanna’s sorry, of course. But it’s not her fault he’s dead, is it? Besides, she never loved him. Boys are just toys, to be used and thrown away.

But this time, Joanna’s gone too far. Because Dex is back. From the dead. For one last date with her…. 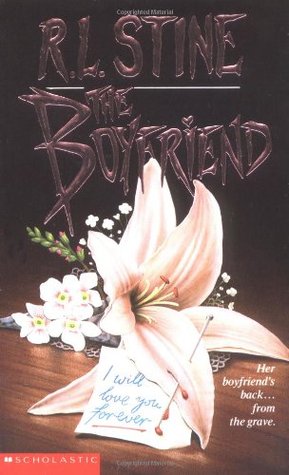 Now doesn’t that bring back memories of flimsy paperbacks with tiny print?  This story turned out to be exactly what you probably think it would be judging by the cover and blurb.  I still can’t figure out whether or not I read it all those years ago, but on the whole I think I must have because I remember the name Shep as well, bizarrely, as the scenes featuring Joanna practicing with her tennis coaches.  I could not, however, remember any of the “horror” elements.

This is probably a good thing, because they weren’t all that horrifying really.  I remember being irrationally terrified of the events of Beach House back as a young gargoyle, but I can’t imagine that this one ever scared me that much, if in fact I did read it as a youngster.  If you picture all those celluloid teen slasher films like I Know What You Did Last Summer and Scream, than you’ll have a pretty good idea how this story turns out, although there is a lot less violence, which surprised me.

Joanna is a right piece of work – selfish, horrid to her mother and generally a bad seed – and she discovers toward the end that the undead appreciate a little acknowledgement during their living years, otherwise they might just come back with a vengeance.

The best thing I can say about this one is that it was a quick read.  Nothing particularly unexpected happens, there are no shocking horror bits and generally this can be considered a fun, no-brainer of a read for when you want to escape.

I’d love to get hold of Beach House again though and see if it actually is scary.  Even a little bit!

Did you read any of these books as a youngster?  What did you think of them?

I’m submitting The Boyfriend for my Mount TBR Reading Challenge for 2017.  You can check out my progress toward my challenges here.