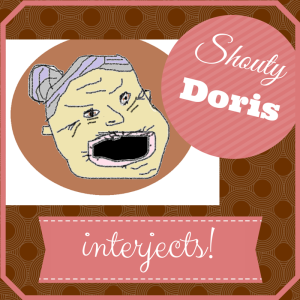 Doris has joined me today for Aussie author Claire Varley’s debut adult contemporary novel, The Bit in Between, which features two mildly confused twentysomethings trying to nut out identity, destiny and love in the Solomon Islands. We received a copy of this book from Pan Macmillan Australia as part of the blog tour for the book’s Australian release – thanks Pan Mac Aus!

As Doris is shelfside today, you can almost be guaranteed that a spoiler of two will slip out. I try to tell her, but you know how she is. You’ve been warned. But let’s get on.

There are seven billion people in the world. This is the story of two of them.

After an unfortunate incident in an airport lounge involving an immovable customs officer, a full jar of sun-dried tomatoes, quite a lot of vomit, and the capricious hand of fate, Oliver meets Alison. In spite of this less than romantic start, Oliver falls in love with her.

With no other place to be, Alison follows Oliver to the Solomon Islands where he is planning to write his much-anticipated second novel. But as Oliver’s story begins to take shape, odd things start to happen and he senses there may be more hinging on his novel than the burden of expectation. As he gets deeper into the manuscript and Alison moves further away from him, Oliver finds himself clinging to a narrative that may not end with ‘happily ever after’.

Now I know that I have a blanket policy of disliking romance books on sight – it comes from having a heart of stone, you see – but I do like to give an affirmative response when asked to review new release contemporary Australian books. This is mostly because I like to keep at least half an eye on what many people are picking up when they wander into a bookshop. So while I was interested in the Solomon Islands setting and the sun-dried tomatoes, particularly, I did have a certain sense of trepidation on entering this story, given that it is advertised as a love story of sorts.

I was happy to discover, however, that The Bit in Between is much more a story about relationships than romance. Phew. Oliver and Alison are an unusual pair, who sort of fall into a spontaneous relationship as much out of a shared sense of ennui as anything else. Oliver is a semi-successful published writer who hates what his publisher did to his debut novel, while Alison is adrift after an unsuccessful relationship with an attractive, narcissistic quasi-poet. I will admit that I didn’t particularly warm to Oliver at all throughout the book, but I became quite fond of Alison by the end.

I didn’t like Oliver either. He needed a good kick up the backside with a pointy-toed shoe. Lazy sod. Instead of moping about and whinging about having writer’s block he should have spent his time getting a haircut and a real job. A bit of gainful employment and he wouldn’t have to worry so much about his girlfriend leaving him.

And that Alison! What a nincompoop! What on earth possessed her to take a fancy to that Ed character to begin with? And once she’d escaped from his tedious, self-absorbed clutches, why on earth would she go back?! Young people nowadays! It wouldn’t have happened in my day.

Ahem. Hold on there, Doris. I hadn’t even mentioned Ed yet.

Well hurry up then. None of us is getting any younger. At my age, I’m lucky if I make it to the next commercial break.

Yes, well. Once the happy pair decamp to the Solomon Islands, the planned setting of Oliver’s anticipated tour de force, we are introduced to two characters who have the potential to be the most annoying creatures in contemporary literature. Rick is a loud-mouthed, thrill-seeking, hard-drinking American working for an NGO, who befriends Oliver and becomes an entrenched feature in the lives of the two Australians. Ed is Alison’s aforementioned ex-boyfriend who arrives in the Solomons unexpectedly and creates a fair bit of havoc (as well as some truly dreadful poetry).

Out of the two, I much preferred Rick. His interactions never failed to provide a bit of comic relief and I particularly enjoyed his plans to make his (as yet unnamed) band a sound to be reckoned with in the Pacific region and beyond. Similarly, his bout of malaria was quite amusing in both its outrageous enactment and the fact that one couldn’t help but indulge in a bit of schadenfreude. Ed, however, was just a pain in the proverbial. I have to agree with Doris, in that I didn’t find the storyline between Alison and Ed convincing at all, especially considering Alison’s personal growth throughout her time helping local women in the Solomons.

A waste of space all round – both the storyline and the bloke.

The part of the book that I enjoyed the most was the inclusion of mini-narratives about minor characters – taxi drivers, passers-by, shop assistants – that gave a hint of these characters’ back stories and provided a bit of an interlude during transitions in the main story.

I agree. All of the minor characters’ stories were more interesting than Oliver’s; I’ll tell you that for nothing. Even his ending was ambiguous – like the author couldn’t even be bothered to give him a definitive closing sentence. To be honest, I was hoping for the plane crash he was planning on writing.

I’d eject my own seat if I was stuck between him and Ed on a plane.

Well, your animosities for fictional characters aside, the ending to the story is quite ambiguous. I suspect that a particular interpretation is somewhat implied, but I was quite happy to deliberately ignore that interpretation and craft a much more satisfying (to me) ending in my mind. I think people will take what they want to out of the ending, depending on how they feel about the characters and relationships overall.

All in all, this was a strange beast of a read. It has elements of romance, social issues, personal growth, destiny versus decision-making, grief, loss, happiness, achievement and just a touch of something that could be magical realism. For all that though, the fact that I only really connected with one of the main characters made the read not all that it could have been. On the other hand, the variety of elements in the story, and the unexpectedness (unlikeliness?) of some of the events will keep readers on their toes in what will certainly be a great pick for those looking for a holiday romance novel with a bit of real life thrown in.

Next time, there should be more about the women, who were the only ones doing anything meaningful, and less about silly blokes who couldn’t change a light bulb between them with an electrified light-bulb changing machine. Honestly, men just drag down a good story.