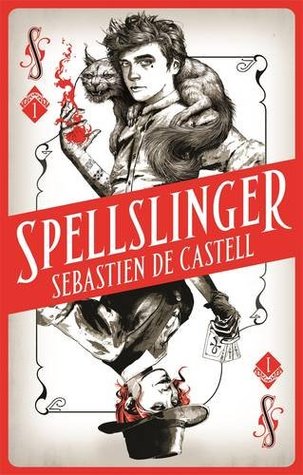 It’s not often I run across a YA book with such original world-building, so I’m just a little bit excited to be sharing Spellslinger by Sebastien De Castell with you today.  We received our copy from Allen & Unwin for review and here’s the blurb from Goodreads:

“There are three things that earn you a man’s name among the Jan’Tep. The first is to demonstrate the strength to defend your family. The second is to prove you can perform the high magic that defines our people. The third is surviving your fourteenth year. I was a few weeks shy of my birthday when I learned that I wouldn’t be doing any of those things.”

Kellen’s dreams of becoming a powerful mage like his father are shattered after a failed magical duel results in the complete loss of his abilities. When other young mages begin to suffer the same fate, Kellen is accused of unleashing a magical curse on his own clan and is forced to flee with the help of a mysterious foreign woman who may in fact be a spy in service to an enemy country. Unsure of who to trust, Kellen struggles to learn how to survive in a dangerous world without his magic even as he seeks out the true source of the curse. But when Kellen uncovers a conspiracy hatched by members of his own clan seeking to take power, he races back to his city in a desperate bid to outwit the mages arrayed against him before they can destroy his family.

Spellslinger is heroic fantasy with a western flavour.

I know I already had you at “deadly talking squirrel cats” but this book has plenty to offer those with a penchant for stories featuring easy-to-follow world-building, an original method of magic use and subtle commentary on social hierarchies and dominant cultural myths.  Kellen is days away from taking the mages’ trials, earning a mage name and upholding his family’s honour – the only problem being that he hasn’t sparked any of the bands that will allow him to perform the spells to pass the trials and so will probably end up as a servant instead. When a wanderer arrives in town and takes an interest in Kellen, events unfold that will tear the fabric of everything Kellen believes about his world.

Spellslinger is an incredibly well-paced story, with revelations about the world and its players occurring at regular intervals.  The learning curve regarding understanding the Jan’Tep society is pleasantly tilted and explained within the action of the story so that the important features and history of the world are grasped quickly, without need for the reader to grope around trying to piece bits together and or wade through boring information dumps.

Kellen is a believable and likable character who realises that he must use his other skills – mostly his crafty, tricksy, strategising brain – to manage in the world as his magic deserts him.  Into this strict social hierarchy comes Ferius Parfax, a wandering, card-slinging, fast-talking, ass-kicking woman who manages to avoid any stereotype relating to female characters in action stories.  She is clever, cautious, compassionate and covert in equal measure and essentially performs the narrative function of holding the piece together, as well as providing the impetus for new directions at the end of the book.

The narrative balances action and danger with more philosophical questions about identity, cultural background and the injustices we perpetuate in order to maintain our own comfortable living standards.  I particularly enjoyed Kellen’s convsersations with the Dowager Magus as something peculiar in YA fiction; the adult conversations and the expectation from the Dowager Magus that Kellen would rise to her expectations intellectually felt authentic and added an extra layer of gravitas to a narrative that could otherwise have descended into your typical boy-hero-saves-world story.  Spellslinger is definitely a YA book that could be appreciated by adult readers in this sense.

The ending of the book leaves the way open for a completely different setting and story for the second book in the series and I am looking forward to seeing where Kellen’s path will take him.

And after all that I’m not going to tell you anything about the deadly talking squirrel cats.  You’ll just have to read the book.