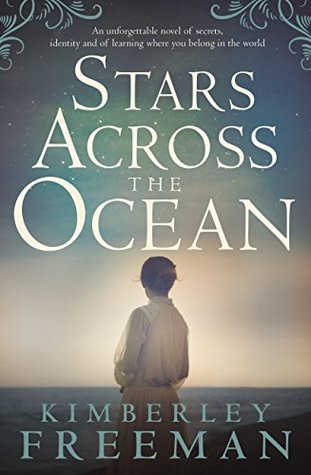 I wouldn’t have expected to enjoy today’s book as much as I did given that historical women’s fiction isn’t necessarily my go-to genre and I received this one from  Hachette Australia for review having requested completely different titles for this month.  To be brutally honest, I was expecting to flick through the first pages and decide to DNF, but instead found myself totally preoccupied with this story from the first chapter.  Stars Across the Ocean by Kimberley Freeman is three stories in one, ranging from contemporary England to 19th century Colombo and beyond.  Here’s the blurb from Goodreads:

A story about love, motherhood, and learning whom you belong to in the world.

In 1874, wild and willful Agnes Resolute finally leaves the foundling home where she grew up on the bleak moors of northern England. On her departure, she discovers that she was abandoned with a small token of her mother: a unicorn button. Agnes had always believed her mother to be too poor to keep her, but Agnes has been working as a laundress at the foundling home and recognises the button as belonging to the imperious and beautiful Genevieve Breakby, daughter of a local noble family. Agnes had only seen her once, but has never forgotten her. She investigates and discovers Genevieve is now in London. Agnes follows, living hard in the poor end of London until she finds out Genevieve has moved to France.

This sets Agnes off on her own adventure: to Paris, Agnes follows her mother’s trail, and starts to see it is also a trail of destruction. Finally, in Sydney she tracks Genevieve down. But is Genevieve capable of being the mother Agnes hopes she will be?

A powerful story about women with indomitable spirits, about love and motherhood, and about learning whom you belong to in the world.

In the present, Victoria rushes to England from Australia to confront her mum’s diagnosis of dementia.  Her mother, a prominent history professor at the local university, found herself in hospital after inexplicably walking out into traffic and Victoria is shocked at her, usually formidable, mother’s mental degeneration.   In the distant past, Agnes breaks all the rules of society to search for the mother that abandoned her as a baby, even as those she meets recount memories of her mother that are far from complimentary.

These two stories, along with one more told in letter form, intertwine in unexpected ways in this epic tale that never loses the thread of the plot and delivers female characters who break the mould at every turn.  The book opens on Victoria’s mad dash to her mother’s bedside and although this plotline bookends the others, it isn’t the main focus of the story.  Instead, Victoria’s story provides the link between Agnes and the present, as Victoria’s mother is fixated on finding a letter that she has “lost” due to her deteriorating memory – a letter that tells the tale of a young mother forced to give up her illegitimate child.  I loved the way in which Agnes’s long adventure was broken up with Victoria’s story. The similarities of the two stories focused on the relationship between mother and daughter worked beautifully set against the juxtaposition of past and present.

Agnes’s epic travels are rife with danger, action and the unexpected, moving from life in the foundling home to squalor in London, from safety and friendship working as a lady’s companion to fear and captivity in a French bordello, and beyond to two separate sea voyages, a meeting with an old friend and a connection with another woman who isn’t afraid to throw off the shackles of expectation of female norms. Does Agnes finally find her mother in the end?

But the neatly dovetailed ending of all three plotlines was perfectly satisfying and uplifting, leaving the story on a note of hopefulness and expectation for a bright future.

Even though I initially had doubts about how much I would enjoy this story, I am pleased to relate that I was thoroughly impressed with the control that the author held over the three separate storylines and the excellent pacing with which these alternated.  If you are looking for an absorbing read with memorable and authentic female characters and a fantastic balance of loss and hope then you should definitely give Stars Across the Ocean a look.

I am submitting this book for the PopSugar Reading Challenge in category #33 (although it could have fit into a number of different categories): a book that takes place in two time periods.  I’m also submitting it for the Epistolary Reading Challenge, because one of the major plotlines in the book revolves around a letter.

You can check out my progress for all of my reading challenges here.