I’m very excited about today’s double-dip review because I get to bring you two of the shelf’s favourite characters in their newest picture book outings.  Better than that even, both of today’s books are by stalwart Aussie picture book authors and illustrators.  So grab your lamingtons and meat pies and let’s get stuck into today’s double-dip! 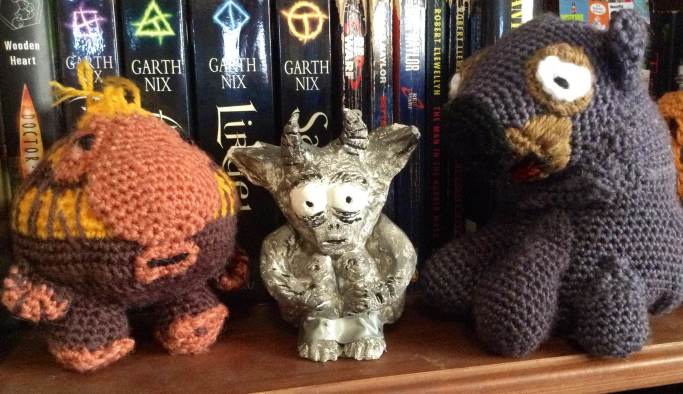 First up, we have (somewhat fashionably late!), Grug and His First Easter by Ted Prior, which we gratefully received from Simon & Schuster Australia for review.  Here’s the blurb from Goodreads:

One warm sunny day, at the end of summer, Grug discovers that Easter is on its way.

Then he is visited by a mysterious creature, who leaves treats of special eggs for Grug to find.

Grug and his bush friends look for the eggs, and Grug makes some art from the shiny wrapping.

But who is the mysterious creature? Will Grug ever find out?

…another short but thought-provoking adventure from everyone’s favourite mutated Burrawang tree!  I must admit that I was surprised that Grug has been strolling around the bush for 30 years and is only just now discovering Easter, but this is a great choice for a book that addresses the absolute ridiculum of trying to explain the unique mash-up of seasonal, pagan, Christian and pop-culture motifs that make up the modern celebration of Easter to children who live in a hemisphere where Easter falls in Autumn, not Spring, and in a state where rabbits are banned.   Grug, of course, takes such nebulous concepts in his stride, having a bit of a ponder in his burrow, before the Easter Bilby delivers some chocolate eggs, and Grug demonstrates the virtues of recycling the foil wrappers before life continues much as before.

…you’re expecting a cutesy story about Grug helping the Easter Bunny to save Easter or other such rubbish.  That’s not how Grug rolls.

I am heartily impressed with Ted Prior’s work here – from Grug’s charming little bobble-hat, to his worried preponderance over the thought of being born again, Prior has captured both the simplicity and the competing symbolism of the season.  The only thing that would have made this stellar for me was if the Easter Bilby had been dispensed with in favour of one of our two cute (if spiky and/or poisonous) egg-laying mammals – the platypus or the echidna – just to add to the general confusion of the season.  If you aren’t from Australia, and fancy getting a taste of the unique blend of elements that go into an Aussie Eastertime, you should definitely pick up Grug and His First Easter – I guarantee it has fewer calories than chocolate.

Next up we have everyone’s favourite wombats (sorry Muddle-Headed Wombat, you have been eclipsed in popularity!) returning in the next installment of the Diary of A Wombat series, by the unbeatable team of Jackie French and Bruce Whatley: Grandma Wombat.  Just in time for Mother’s Day too.  We gratefully received a copy of Grandma Wombat from HarperCollins Australia for review.  Here’s the blurb from Goodreads:

She eats. She sleeps. She scratches.

And like all grandmas, she thinks her grandson is the best-behaved baby ever.

But this baby wombat has other ideas …

Created by author Jackie French and illustrator Bruce Whatley, this delightfully funny book celebrates the love and joy that being a grandma can bring. 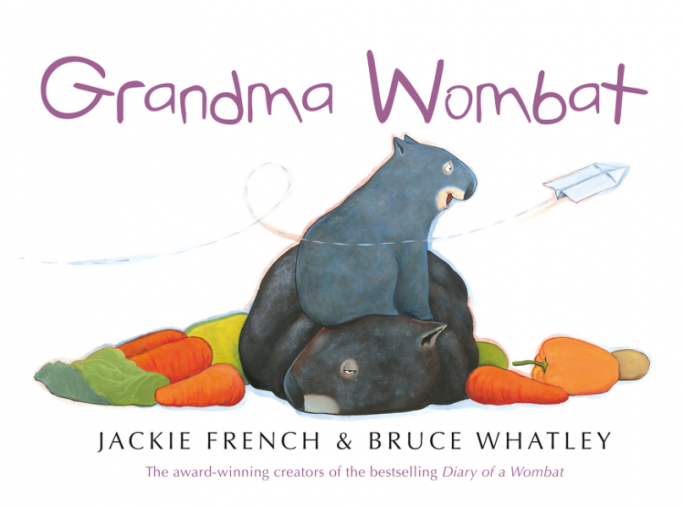 …a wombat adventure featuring rude ‘roos, unexpected vehicular transportation and more than a little bias on the part of one very proud (but sleepy-eyed) grandmother.  Now it is no surprise that the shelf loves this series dearly, but we had noticed that the mini-fleshlings in the dwelling weren’t taking to some of the books in the series as well as we shelf-dwellers did.  That all changed with Grandma Wombat, with both shelf-dwellers and mini-fleshlings laughing heartily at the antics of one cheeky baby wombat.  Enormous props must be given to Bruce Whatley for the subtle yet hilarious facial expressions on everyone from the dog to the baby kangaroo to the humans in this surprising adventure.  Here’s a snippet to give you a taste of the hilarity waiting in the illustrations alone: 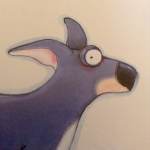 So what on earth is going on with these wombats? You’ll just have to read to find out!

…Nope. Can’t think of a single reason not to.

I love the way that the creators of this series continue to reinvent the story, with new wombats, new settings and unexpected adventures.  If you are looking for a sure-fire hit book for a gift, then this is certainly a canny option as the story is different enough from the rest in the series to inspire some good laughs, as well as being subtly subversive in terms of Grandma’s functional blindness toward her grandson in a way which parents and grandparents will recognise and appreciate.  All around, it’s another winner from the French/Whatley juggernaut!

Before we leave the wombat family, Mad Martha wishes you to know that she desperately wanted to bring you a “Yarning with Mad Martha” feature for Grandma Wombat, along with a free crochet pattern for baby wombat.  While she did manage to recreate baby wombat in yarn, the method used to recreate Bruce Whatley’s iconic wombaty shapes resulted in a lot of freeforming (ie: winging it) and so she couldn’t wrangle the pattern into a format that could be easily followed by other crafters.  Here’s the final product for your perusal, anyway: