Today, unusually, I’m bringing you a Read-it-if review for a sequel.  The Marching Dead by Lee Battersby is the follow up tome to the quirky and creatively titled The Corpse-Rat King.  You’ll remember of course that in the first book, the irrepressible Marius don Hellespont was mistaken for the King of the Dead while looting the corpses of soldiers post-battle (a simple mistake to make, I’m sure you’ll agree) and was forced to set out on a quest to find the dead a real king.

In this book, Marius and his fellow flesh-folk find that their dearly departed have…well…departed… from their cosy home in the soil for reasons unknown.  Enter Marius’ simple mountain-lad mate Gerd (deceased) and Gerd’s potty-mouthed Granny (also deceased), and a now-you-see-him-now-you-don’t cat and you have a questing party worth hitching your (deceased) horse and cart to.  The story follows Marius and co. in their efforts to figure out where the dead have got to and what they plan to do when they get there. 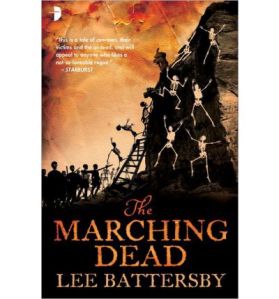 * you’ve read The Corpse-Rat King, or you’re looking for something that doesn’t take itself too seriously

Although this is a sequel, I’m sure that it could be enjoyed and followed fairly easily for those who haven’t read The Corpse-Rat King. Having said that though, the first book is a fun, cheeky read in itself and is definitely worth a look, particularly if you enjoy fantasy tales and would like something that is pitched entirely at (immature) adults.