Today’s book is full of adventure and secrets, danger and hope and as such is the perfect winter read to snuggle up with.  We received The Secret of Black Rock by Joe Todd-Stanton for review from Walker Books Australia and here’s the blurb form Goodreads: 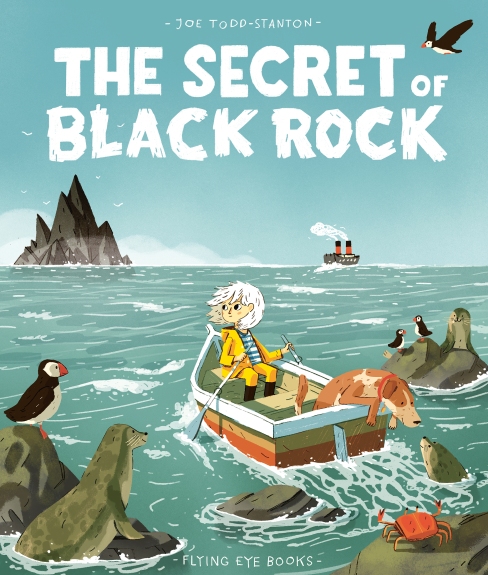 Erin loves to lie on the jetty, looking for the weirdest fish in the sea—the weirder, the better! And she knows the best ones must be further out, where her mum won’t let her go . . .

Out there in the deepest sea lies the Black Rock: a huge, dark and spiky mass that is said to destroy any boats that come near it! Can Erin uncover the truth behind this mysterious legend?

The Secret of Black Rock is a sumptuous feast for the eyes, from its glowing golden endpapers to the layered blues and greens of the deep sea.  It reminded us strongly of another 2017 picture book release, Grandad’s Secret Giant by David Litchfield, due to similar themes of not judging a book by its cover and the need to preserve, protect and learn about the things we don’t understand.

The story opens with various characters recounting the horrors of Black Rock, a rock formation close to a coastal fishing village that has a reputation for destruction and danger.  Erin, however, is not afraid and will employ all her cunning and sneakiness to stow away on her mother’s fishing boat to catch sight of the Rock, despite its fearsome personification in the eyes of the villagers.  When Erin is accidentally thrown overboard, she discovers the Rock’s secret and attempts to reveal this to the villagers – but they misinterpret her message and set out to destroy the Rock once and for all.

The illustrations here are so atmospheric, with the contrast between the warmth of home and the cold, roiling mass of the sea reinforcing the dangers of venturing too far from the safety of the shore.  When readers finally catch a glimpse of Black Rock they won’t be able to avoid feeling that the poor old rock has been a bit hard done by the fisherfolk, and will be hoping for a positive resolution to the story.  The mini-fleshlings in this dwelling also had a great time spotting all the different sea life that is depicted making their homes around the rock.

This story would be a great conversation starter in the classroom around issues of gossip and the negative effects that can come from judging without full knowledge of the situation.  Similarly, it would be the perfect choice for a bedtime read aloud on a cold and windy night, when the nature’s perilous side can feel all too real.  We Shelf-dwellers think it’s a winner.