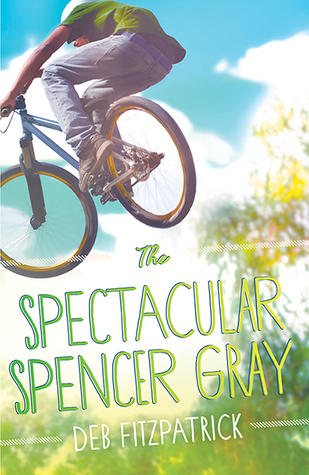 If you are looking for a bit of adventure to spice up your life, delivered with a side order of cute furry marsupial then The Spectacular Spencer Gray by Deb Fitzpatrick is clearly what you have been missing in your life.  We received a copy from Fremantle Press for review and here’s the blurb from Goodreads:

Spencer Gray is just an ordinary kid, but he manages to get into some pretty extraordinary situations.

When Spencer stumbles on a sinister operation in the bush, his life goes into overdrive – midnight rescue missions, super-endangered animals, hair-raising adventures.

To survive, Spencer will need to pull off something spectacular.

It’s refreshing to come across a book which is fun but touches on serious subjects, is laconic but allows the reader to learn something (surreptitiously!) and is action-packed, but also feels creepily authentic.   It’s safe to say then, that I felt refreshed after having read of Spencer’s escapades.

Before we get started, let me point out that this is the second adventure of the titular Spencer Gray, the first of such adventures having been chronicled in The Amazing Spencer Gray which was published in 2013.  Also allow me to point out that I was not aware that this wasn’t Spencer’s first dangerous outing and it made not one jot of difference to my enjoyment of the book.  This tale can certainly be read as an exciting standalone novel with no need for prior knowledge of Spencer’s situation.

The book opens on Spencer’s unwitting discovery of a bizarre, homemade setup in the bush just outside his school oval containing a collection of native Australian animals.  Spencer makes the split second decision to bring one of the animals – that he later learns is a Potoroo (google it) – back to his home, because it looks on the brink of death.  When Spencer and his mates Charlie and Leon decide they should return the Potoroo to the bush, things start to go pear-shaped because it immediately becomes clear that someone…or multiple someones…are not happy that Spencer has discovered their criminal activities.

The pacing of the story is truly Australian, in that it takes its time to warm up and the boys are remarkably laid back about (a) finding a bunch of native animals in a slapdash shelter in an unlikely place and (b) keeping an endangered animal in box under a bed.  The second half of the book however, in which Spencer’s marsupial-saving activities come home to roost in the worst outcome possible, is all go, go, go and I whipped through these chapters like a Potoroo with its pants on fire.   Although the events of the second half of the book are, when viewed objectively from an adult’s point of view, pretty far-fetched, the suspense in the writing somehow made them feel decidedly authentic and I really felt for Spencer’s parents as they waited with mounting terror for news of their son’s whereabouts.

Overall, Fitzpatrick has done a great job with balancing the adventurous and more down-to-earth elements of the story, as well as providing information to the reader in a readily digestible form about one of Australia’s most endangered animals.  And in case you’re wondering, no, I had no idea what a Potoroo looked like before reading this book.  Or that it was endangered.  In fact, after reading the book, I visited Google to run a comparison on Potoroos and Quokkas and while typing in Potoroo vs… the option for Quokka immediately came up, so clearly I’m not the only one still learning here.

I would recommend The Spectacular Spencer Gray to young readers looking for a quick yet involving read featuring an unlikely hero and the adventure that awaits in the great outdoors.