You know that old joke, don’t you? The one where the engineer and the philosopher walk into a time tunnel?  Well, if you haven’t heard it, let me be the first to introduce you to friend-of-the-shelf, indie author Jemima Pett’s adventure series for all ages: The Princelings of the East! We shelf-dwellers are very pleased to be participating in the tour, hosted by My Family’s Heart, to promote the first three books in this six book series.

Now, while I say that the tour is promoting the first three books in the

series, I only managed to get through the first two before my tour date crept up on me, so I’ll be focusing in on those two today. I should also mention that I acquired the trilogy by winning a competition run by Jemima herself a veritable age ago and this tour gave me the perfect opportunity to knock two books off my TBR and re-home them on my permanent shelf – hurrah!

To start us off, here’s the blurb for the trilogy from Goodreads:

Suitable for all ages, The Princelings of the East is a trilogy relating the adventures of unlikely guinea pig heroes Fred and George. Two innocents abroad, they solve problems caused by unintended consequences, commercial greed, and blind prejudice yet still find time to engage in troubled love affairs and nearly blow themselves up with their own inventions.

Oh yes, did I mention that the engineer and the philosopher are, in fact, guinea pigs? Sorry for the oversight. I suspect that the reason this trilogy has sat on my TBR unread for so long is because I am mildly wary of books based around anthropomorphic animals. I’m pleased to say, however, that the writing here is such that the guinea pig thing is hardly an issue and when I did remember I was reading about guinea pigs, the mental image always gave me a little giggle. Essentially, Fred, George and the gang definitely grew on me quite quickly.

Book one of the trilogy is The Princelings of the East in which we are introduced to Fred and George’s world – a world made up of castles full of guinea pigs, each with their own royal lineages. In this book, the Castle on the Marsh (or Castle Marsh for short) is experiencing strange and highly inconvenient energy drains and Fred (the philosopher) and George (the engineer) decide to throw caution to the wind and venture forth from Castle Marsh to see if they can discover the cause of the Energy Drain.

Almost immediately the brothers are separated and while Fred is led onwards by a stranger with an unusual accent and plus-sized girth, George finds himself in a different castle that seems to be labouring under some very odd chronological anomalies. As the brothers puzzle out the mysteries that they are faced with in their separate situations, we are introduced to a host of other characters and must riddle out, along with Fred and George, who is trustworthy and who might not be who they appear to be.

I was surprised at the cerebral nature of the writing in what I originally thought was a middle-grade story. Much of Fred’s adventure is taken up with political to-and-fro-ing as high profile members from other castles become involved in solving the problem of the Energy Drain and diplomatic relations between various castles are carefully managed. George, in the meantime, is left to unravel the mystery of a tunnel that appears to transport its users to other times, while also assisting in the streamlining of production processes of a widely exported diet drink.

At times, during Fred’s story arc, I felt a bit like I was reading Jane Austen (for guinea pigs) and during George’s, I felt like I’d fallen into Back to the Future (for guinea pigs). While this might sound an unpromising match, it actually worked really well to keep me engaged. And as I mentioned before, whenever I remembered that these were guinea pigs – riding in carriages, fixing industrial vending machines and the like – it gave me a chuckle. It’s rare that you find a book that is pitched nominally at children that also has enough intellectual material in the plot to keep adults interested, but this is one of those books. 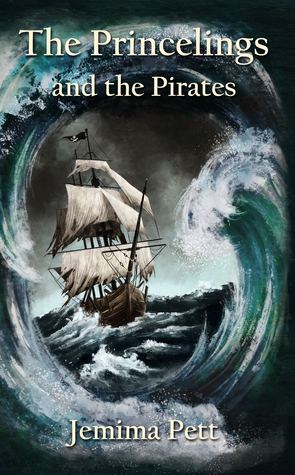 The second book in the trilogy is The Princelings and the Pirates which does exactly what it says on the tin, plunging Fred, George, some of the guys we met in the first book and some new furry faces into a good old, piratey adventure. This book had a much lighter tone than the first and the action – in terms of deck-swabbing, swashbuckling, kidnapping and the like – increases tenfold. The book opens with Princess Kira of Dimerie, a prime wine-producing kingdom, kidnapped by pirates – guinea pig pirates, obviously – and when the other castles send emissaries to find out why the wine supply has dried up, said emissaries, including Fred and George, are press-ganged into the pirate life.

As well as the general pirate business, there’s also a surprise in store for the brothers as they discover a certain bad seed nestled in the branches of their family tree, suffer some critical injuries and aid in the effort to subdue the pirate menace. I thoroughly enjoyed this story, being partial to tales set on the high seas and the whole “main characters are guinea pigs” thing really had me giggling as my mind boggled at some of the more swashbuckly battle scenes in which the characters engage.  This book also had many more touching scenes as friends, new and old, fall into dangerous situations and the thin line between life and death becomes a tenuous one to walk.

I really appreciated the diversity between the two tales and now I’m chomping at the bit (of lettuce) to get at book three, The Princelings and the Lost City, which as I mentioned, I didn’t get time to read before this post.

Starting this series has been enlightening, and I feel I’ve been inspired to take another look at Brian Jacques’ Redwall series – if I can enjoy adventurous guinea pigs so much, surely battle-hardened squirrels will be right up my alley!

If you are looking for an adventure series that will give your brain and your funny-bone a work out, then I can heartily recommend having a look at the Princelings series. It’s certainly got a wider appeal than just middle grade aged readers.

16 thoughts on “An Engineer and a Philosopher Walk into a Time Tunnel: The Princelings of the East Blog Tour!”