I’ve got two bite-sized pieces of picture book loveliness for you today, both featuring shifting perspectives and personal discovery.  Since I know you’ll have a tasty snack to hand, given that we’ve just experienced the Great Human Feast of Chocolate Worship (or something like that…) we’ll dip right in.  Oh, and keep reading to the end of the post for your chance to win one of the books featured in today’s Double Dip – you’re welcome!

First up, we have A Tale of Two Beasts by Fiona Roberton, kindly provided to us for review from Hachette Australia.  Here’s the blurb from Goodreads:

A little girl rescues a strange beast in the woods and carries him safely home. But the beast is not happy and escapes! A funny and charming tale about seeing both sides of the story. 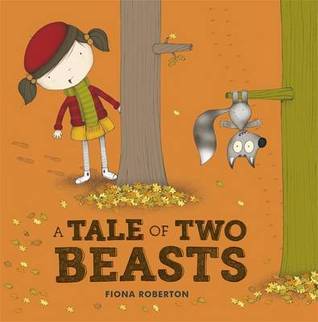 …a clever lesson in looking at things from someone else’s perspective!  Apart from the delightful illustrations and the priceless facial expressions of the squirrel-bat-wolf creature, this book has a unique format that tells the girl’s side of the story from the beginning to the middle, and then the squirrel-wolf-bat creature’s side from the middle to the end.  The illustrations are almost identical in each half of the book, with subtle changes in positioning and speech to reflect the viewpoint of the narrator. When all is said and done, a consensus of opinion is reached betwixt girl and creature and a delicate, joyful balance achieved.

…you’re not a fan of ambiguity in animal identification.  And you don’t want to suffer a serious case of bobble-hat envy.  That little hat is so cute!

The only thing that could have elevated this to Top Book of 2016 pick status for me is if the format had been changed so that the two stories both read towards the middle of the book, culminating in the same whimsical, night time romp.  That would have been perfect.  As it is, this is still a fun, subversive read that will have young ones pondering the meanings behind their pets’ facial expressions for days after reading.

Next up, we have Dave’s Cave by Frann Preston-Gannon, author of such greats as the Dinosaur Farm series, which we received from Allen & Unwin for review.  Here’s the blurb from A&U:

Dave loves his cave. Inside is decorated EXACTLY the way he likes it. Outside there is a lovely spot for a fire and the grass is always lovely and green. But, Dave is unhappy. What if there might be an even better cave out there? And off he sets in search of a new home. But it turns out that good caves are hard to find. They’re either too small, or too big, or too full of bats, until he finds one that looks MUCH more promising. Outside has the perfect space for a fire and the grass is greener than any he’s ever seen… But why does it look so familiar?

…a fun romp through the cave age that will prove the commonly held theory that the grass isn’t always greener (nor the stone shinier), on the other side of the cave mouth.  Dave is just a big, old, cave-dwelling sweetie with his big beard and stylish leopard print smock and, although he doesn’t seem like the kind of cave-guy to want more than he has, decides to check out what’s on offer in the way of local real estate.  The illustrations in this one are chunky and bright and deliver plenty of colour to the Stone Age setting, and the cave-talk text provides an opportunity for cave-dads to put on funny, cave-man voices while reading aloud.  Adult readers will see the ending coming a mile off, but its inevitability is part of the appeal and comfort of the tale.

…you’re hoping for a tale with a twist.  This is a standard “grass is not always greener”, appreciate-what-you-have sort of tale, but certainly doesn’t suffer for that.

I was so enamoured of Dave’s cute-appeal that I nearly handed this one over to Mad Martha in the hope that she would whip up a little crochet Dave and Cave playset.  Perhaps she’ll have time for that later. This is a real comfort story that will provide mini-fleshlings with that warm, fuzzy sense of feeling safe in a place you know you belong.  The opportunity to put on funny cave-man voices for narration is just a bonus.

Now for the GIVEAWAY!

If you would like to win a copy of one of these books, simply comment on this post with your choice and tell me why you should win it.

The giveaway will be open from the moment this post goes live (NOW!) until midnight on April 5th, Brisbane time.  The giveaway is open internationally and one winner will be chosen from the pool of commenters by a random number generator.  The winner will have 48 hours to respond to a congratulatory email before a new winner is chosen.  We won’t be responsible for prizes lost or damaged in transit.

Thanks again to Hachette Australia and Allen & Unwin for the review copies.

8 thoughts on “A Double-Dip Picture Book Review and Giveaway!”