Yes, I know: knitting is more Mad Martha’s field of expertise, but when we noticed that knitting was combined with piracy in this book I stepped boldly into the fray.  Today’s book, Ned the Knitting Pirate by Dianna Murray and Leslie Lammle was received gratefully from PanMacmillan Australia for review.  Here’s the blurb from Goodreads:

The crew of the pirate ship the Rusty Heap are a fearsome bunch! They’re tougher than gristle and barnacle grit. They heave and they ho and they swab and they . . . knit?

Well, one of them does, at least! Unfortunately for Ned, his knitting doesn’t go over well with the captain and crew. They urge him to hide his hobby and strive to be scurvier, like pirates should be. But when the briny ocean beast shows up to feast on the Rusty Heap and its crew, maybe Ned’s knitting is just the ticket to save the day! 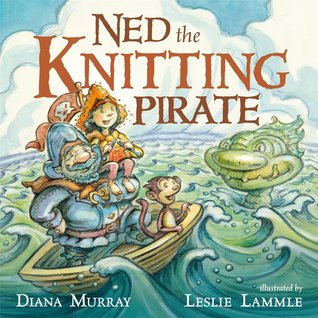 If you’re looking for a pirate tale with a difference in a picture book market that is saturated with piratey titles, then look no further than Ned and his two pointy sticks.  Ned is a delightful young pirate who is perfectly content to be who he is, despite the fact that his love of knitting seems to rub his shipmates up the wrong way.  In every pirate situation – finding treasure, drinking rum, swabbing the deck, belching – Ned finds time to pick up the needles and get crafting.  Even though his shipmates are keen to undervalue Ned’s hobby at every opportunity, even they can’t deny that Ned’s knitting might come in handy when traditional methods of frightening off sea monsters have failed.

The book is written in a bouncy, jaunty rhythm with rhyming text, so it’s perfect for reading aloud to your little landlubbers. There’s also a repeated refrain in the form of a pirate song that will allow adventurous readers to join in lustily with a harmless sea shanty.  The illustrations are appropriately fluid, featuring a palette of mostly cool, ocean colours.

I did find it a bit strange that Ned’s knitting was shunned by the pirates when sailors of that vintage would have been experts with a thread and needle.  Given that it was essential for sailors to be able to repair torn canvas sails and sew their own clothes and hammocks, it wouldn’t seem to be too far a stretch for some sailors to have a good knowledge of yarn-related crafts also.

Especially when you consider that it would be hard to knit when you’ve only got a hook for a hand.

Practicalities aside, this is a fun and quirky addition to the pirate kidlit subgenre with a subtly subversive message about being true to oneself even when those around you can’t see the value in your passions.