Welcome young and old to another meeting of the Maniacal Book Club.  Today we have a book for middle grade readers who are not afraid to be scared right out of their swimming pools.  We received How to Rid Your Swimming Pool of a Bloodthirsty Mermaid by Mick Bogerman through the Goodreads First Reads giveaways and how grateful we are to have been introduced (albeit through book number two) to this action-packed, thrill-filled story of monsters, mayhem and malevolent mermaidery.  This book is part of the Slug Pie Story series, which began with How To Navigate a Zombie Cave and Defeat Pirate Pete and is currently at How to Destroy the New Girl’s Killer Robot Army.  Clearly, we were drawn to both the fantastical content and the fact that these books hinted at providing helpful tips for conducting oneself in the aforementioned frightening circumstances.

Mick thinks he’s bartered a sweet deal when he trades seven mows of rich neighbour PJ’s lawn for seven swims in PJ’s pool. Since last month’s incident fighting zombie pirates in which Mick’s little brother Finley nearly drowned, Mick has decided to take no more chances and seize the opportunity to teach Finley to swim.  Things don’t go according to plan however, because when Mick and Finley accidentally feed a mysterious substance to PJ’s beloved sea monkeys, a large, deadly, scaly problem that no one could have foreseen suddenly surfaces to throw all humans in the vicinity into mortal danger.  The boys’ mistake somehow causes the growth of a real-life mermaid – not the lush-tresses, coquettish, tail-flicking sort of mermaid, but an enormous, gorilla-hairy, hypnotic-eyed, human-eating mermaid.  Now it’s up to Mick, Finley and the utterly inept PJ to find a way to get Marilyn (PJ’s choice of name) out of the pool before anyone else becomes her lunch, dinner or midnight snack. 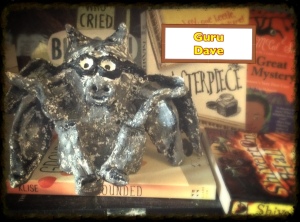 Friends, fellow-readers and lovers of acquatic life take heed! The Bogerman boys’ story is a cautionary tale for all those who do not read the fine print.  It is so easy to be seduced by advertising and fail to consider the consequences of our purchases.  Add to this the growing gap between rich and poor and the communication breakdowns that occur between those in the two camps, and before you know it a scaly, hungry water-demon has been unleashed to reign down merry hell on the hired help.

Let this story be a lesson for all those who send off for the offers at the back of vintage comic books.

No dragons in this book.  But there is a really scary mermaid who hypnotises people into the water and then EATS THEM!! That was pretty cool.  And her name’s Marilyn.  That was funny.

I like Mick because he’s fearless and does lots of cool stunts to try and get Marilyn back to the ocean.  Finley’s pretty cool too because he always thinks things through.  PJ is a bit of a baby.  But he turns out okay in the end.

I hope one of Mick’s next books has dragons in it. But the killer mermaid was okay as a substitute.

Let us all heed advice from our mothers

We should not judge the books by their covers

As with flesh-ripping death you’ll discover

I was surprised at how much I really enjoyed this tale.  The story is pitched at a middle grade audience, but Mick himself warns parents at the very start with a disclaimer that this book is not for the faint-hearted reader.  On the other hand, if you have a young male reader (or female, obviously, but particularly male) who loves action, fantasy violence, heroic actions, kids having to solve problems out of their depth (pun intended) and just general mayhem and adventure, then get them onto this series right this second.

Mick is a rough-as-guts narrator with a strong sense of right and wrong, and is highly protective of his younger brother. Finley is the thinker of the partnership, considering problems from all angles before making a decision.  And PJ….well, PJ learns some valuable lessons about moving out from under his rich parents’ shadow and thinking for himself.

I read this book in one sitting I was so riveted by the narrative style and the action and I think it’s a book that will have great re-reading value.  I’m excited to see what happens in the other adventures in the Slug Pie stories series as this seems to be a fresh, action-packed take on the standard middle grade fantasy genre. The back of the book features a handy little recap of all the tips and tricks that the boys have picked up for dealing with mermaids of the bloodthirsty variety, which was a nice touch.

What I liked most about this tale, as an adult reader, was the references to the retro sea monkey ads that used to feature in the back of comic books.  Like PJ, oh how I wanted a little kingdom of sea monkeys to brighten up my shelf, with their waving, webby fingers, and their happy capering amongst the fernery.  Really, it took me back. In case you have no clue what I’m talking about, here’s the ad that had me pining and yearning for such exotic pets. 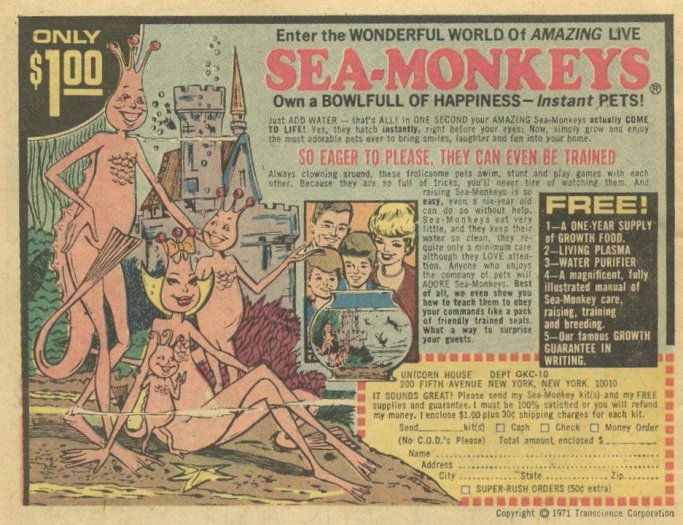 How did they get away with such false advertising I wonder? Oh, that’s right, it was the 70s.

I would definitely recommend giving this particular Slug Pie story a go – particularly if you are in summer right now, because there’s nothing better than reading a story about bloodthirsty pool-dwelling monsters in temperatures which demand regular swimming as an antidote to heat-related death.

12 thoughts on “How to Rid Your Swimming Pool of a Bloodthirsty Mermaid: A Maniacal Book Club Review…”